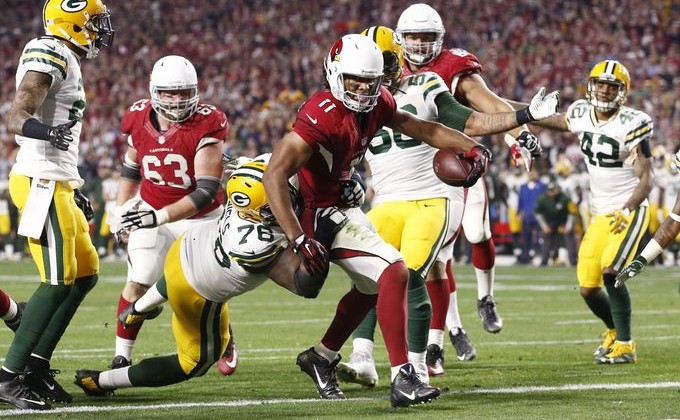 The coin didn’t flip, Carson Palmer was up and down, and Aaron Rodgers wouldn’t go away. You want reality TV? Larry Fitzgerald added more footage for his future Hall of Fame video with two catches for 80 yards and the game winning score in overtime. It looked like Super Bowl 43  all over again when Carson Palmer rolls out of trouble and finds Fitz all alone for the big play to set up the winning score. Bruce Arians stuck to his guns of being a riverboat gambler and it almost backfired with an incomplete pass play in regulation to leave time on the clock for the Hail Mary by Rodgers.

A shovel pass to win the game? Seriously? 18 weeks of having that play in the book, but this is the first time that they brought it out?  That’s great preparation. Fitz jumping into the arms of his former teammate Adrian Wilson to celebrate the victory will go down in Cardinal history books as a shot to remember

It was too close for the Cardinals. They were a touchdown favorite. Green Bay looked like the better team in stretches on Saturday night. It was a game for the ages. If you’re a Cardinals fan, there is plenty to celebrate. But there is certainly plenty to work on for next weeks NFC Title game.

Carson Palmer clearly wasn’t good at times, but he also made special plays in the overtime to get his first playoff victory. It’s always hardest to get that first postseason win, so I am willing to take the stance that he will be smoother in the NFC Title game.