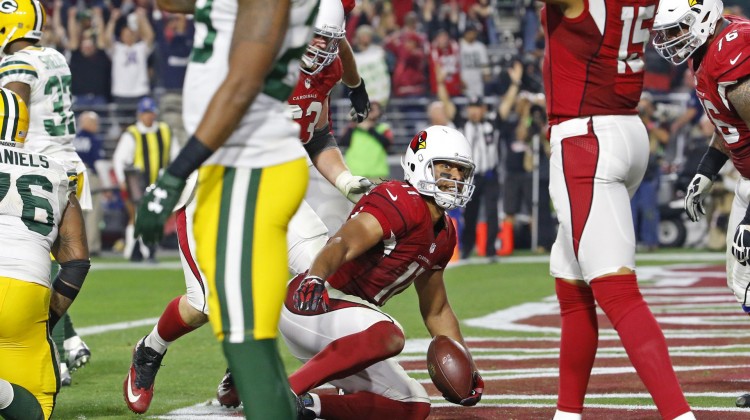 The Arizona Cardinals are one step closer to Super Bowl 50 after their head-scratching, jaw-dropping, nail-biting 26-20 overtime win over the Green Bay Packers in front of a raucous sold out crowd at University of Phoenix Stadium in Glendale. They advance to the NFC Championship game next weekend against either the top-seeded Carolina Panthers or NFC West rival Seattle Seahawks.

1. The Great Escape: Honestly, where do we even start? A listless first half which saw the Packers’ offense play keep away turned into one of the most bizarre, unpredictable post-season games in NFL history. Both Carson Palmer and Bruce Arians went from possible goats to storybook heroes. Aaron Rodgers showed why he’s a two-time MVP. Larry Fitzgerald proved once again age is simply a number, further etching his legacy as one of the game’s greats. Green Bay’s final drive in regulation included a 60-yard completion on 4th and 20 from their own four-yard line. Hard to believe Rodgers would upstage himself three plays later with a “Hail Mary” 41-yard touchdown to some guy named Jeff Janis on the second-to-last-play in regulation. Arians summed it up perfectly after the game. “We have a tendency sometimes of making it too dramatic.”

2. Giving ‘Em Fitz…Again: Fitzgerald put an exclamation mark on the evening with a scramble play 75-yard catch-and-run before sending the Bird Gang home happy in overtime with a five-yard shovel pass score. “I know my team feeds off my energy, feeds off my play,” he explained. “I’m just making sure I’m making plays to build the energy, build the confidence of the group because we were a little flat.” As he’s done countless times over his 12-year Cardinal career Fitzgerald single-handedly pulled his team out of their playoff hangover gashing Green Bay’s secondary for a host of big plays in the third quarter (four receptions, 77 yards) after being held to one catch (two targets) for six yards in the first two. His “effort plays” extending drives were critical with Palmer hampered by poor protection and a non-existent run game. “He makes great plays you don’t see in the run game,” Palmer said. Fitz finished with eight catches for 176 yards and a touchdown.

3. No Cat-astrophes: It was a nice bounce back game for Cards’ kicker Chandler Catanzaro who caught Arians’ wrath after a forgettable Week 17 performance in a home loss to the Seahawks. Despite a couple short kickoffs Saturday, “Cat Man” converted both of his field goal attempts (28, 36 yards), as well as both PAT’s-which has been an adventure at times. “He kicked well,” Arians said.

4. Pack Mentality: Whatever Green Bay “figured out” last weekend in their Wild Card win over the Redskins carried over to the desert as Mike McCarthy’s team took the air out of the balloon inside UoP for the first 50 minutes before the Cards’ offense finally showed signs of life midway through the third quarter. The Packers’ defensive front kept Palmer uncomfortable in the pocket, forcing inaccurate throws both downfield and underneath. They also held the Cards to just 40 yards rushing. “I thought our team came in here, the preparation was excellent,” McCarthy said. “Just the energy and the focus…time and time again, our guys just fought through it.”

5. Role Reversal: In the first half the Packers flipped the script from their Week 16 38-8 meltdown sacking Carson Palmer three times and limiting the Cards’ to 75 total yards. Offensively, two 17-play scoring drives netted only two field goals but the offensive line gave Rodgers plenty of time to distribute his 16 first-half completions among six different receivers. The decimated group took a huge hit when Randall Cobb was carted off early with a chest injury and did not return. Green Bay’s offensive line didn’t allow a sack before halftime and only one in the game.