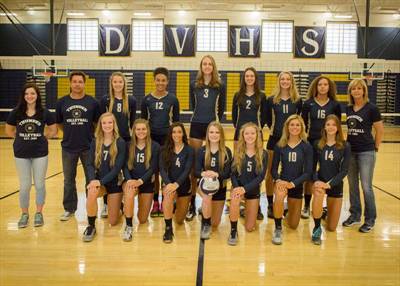 Leading her team to be back-to-back state champions, Desert Vista High School’s girls volleyball coach Molly West has built an outstanding volleyball resume in her 30 years of coaching, this being her 20th year coaching at Desert Vista. The Thunder is made up of six seniors, four juniors, two sophomores and one freshman who she believes will lead the team to success.

“I’ve got 13 girls and they could all play in college,” West said. “They’re all extremely athletic and competitive and they’re very smart. Most of my kids are honors kids.”

Being state champions this year and last year, Coach Molly, as she’s referred to by her players, knows and understands what it takes to be mentally and physically prepared to play because of her past experience playing and coaching at the University of Alabama Birmingham. The team is full of talented, committed players who West said are receptive to learning life skills that work to enhance their volleyball skills.

The players have grown in both their volleyball skills and their character since they have started playing on varsity. Hailey Harward, a senior committed to play at California State University, Long Beach, stepped on the varsity court as a freshman and has been on the team since.

“I’m more experienced and my leadership has improved,” Harward said. “I’m a captain this year and I was a captain last year. I’ve learned it takes leadership but also positivity and you have to know how your team responds to situations.”

The girls know the importance of playing on an elite volleyball team. From playing at Desert Vista, they have formed a bond within the team and coaches who proved a factor in deciding where to take their talents in fall. The girls have learned how important it is to trust and confide in their coaches.

“It’s the coaches first, you got to pay attention. If you don’t like the coach you’re not going to have a happy experience,” Senior Olivia Fairchild, attending Fordham University in the fall, said.

West and the rest of the coaching staff continue to remind players that when deciding on a school to attend, academics are important in the selecting process. The team shows intelligence and commitment to not only play at the collegiate level, but also academically challenge themselves.

“The academics are fantastic, you can’t find them anywhere else and the business opportunities in New York are incredible,” Fairchild added.

The Thunder stands out from other schools in the District because of the academic success and talent these girls have. Senior Shea Landeene, is still deciding where she will play in the fall and what sport she will play. Landeene narrowed her choices to Massachusetts Institute of Technology for indoor volleyball and track, University of California, Berkeley, Stanford and Arizona State for sand volleyball.

Desert Vista has developed into a top-notch program in the region. Under coach Molly West, the Thunder has developed into a dynasty, taking two championships and receiving numerous player awards. They have solidified their standing as a high school to NCAA pipeline for athletes wishing to pursue their passions at a higher level.