Most high school football players want to play at the next level when it’s all said and done and are willing to sacrifice a lot to make that happen.

Liam Jeter did that and then some.

The Goldwater wide receiver always had the ability. His parents describe the way he moved as a child on the pee-wee football field as “graceful”. He when found himself on the field, the ball always seemed to find him.

Growing up, though, wasn’t all about what happened on the field for Jeter.

As a young child, his parents faced marital issues that eventually led to their divorce.

“There was the good and the bad, but there wasn’t a lot of good,” Liam said.

When he was 10, Liam’s grandmother was also dying of cancer in Ireland, so his mother, Jackie, took him and his two sisters to say their goodbyes. When she returned to the states, divorce proceedings began, and she decided it was best for her and her kids to return to Ireland.

Liam went back and forth a few times but eventually stayed in Ireland.

While his sisters adjusted to life in a new country, Liam struggled. He missed his friends back home and wanted to return to the states. As a self-proclaimed brat back then, he needed to become the man of the house to be a role model for his younger sister. The one place he could find solace was on a sports field, playing basketball, soccer, and Gaelic football.

“Sports is where I most feel comfortable,” Liam said. “I know everyone says it and it sounds like a really cliché thing sometimes, but when you go out in the field, you forget. You’re not a kid with problems, you’re not a kid with frustration. And if you are, you play defense.”

Eventually, he convinced his mother to let him come back to the United States and live with his father to pursue an athletic scholarship. So, he traveled the 5,281 miles, a figure his father, William, could rattle off from memory, and returned home.

“That was special,” William said. “Going to the airport and to have the reunion was nice.”

There was a transition father and son had to go through though when they started living together. According to Liam, he left “5-foot-3 with an afro and came back 6-foot-2 with a beard”, and William described it as a “feeling out process”, but their relationship has grown since Liam returned.

“The thing I like is it’s a real relationship,” Liam said. “I’ll tell him something bothers me, he’ll tell me. Then we drop it…I’m really happy with how it is right now”

After being on the fence about joining the team, Liam went out for high school football at the end of his junior year. He caught the eye of his coaches right away, making plays they compared to O’Dell Beckham Jr. in seven on seven drills.

Like living in a new country, Liam had to adapt on the football field when it went from non-contact to putting the pads on. He struggled initially and a leg injury knocked him out of four games at the end of this past year.

“It’s never been an issue of talent with him, it’s just a matter of him learning the wide receiver position,” Goldwater offensive coordinator Matt Pinnick said.

But the Goldwater coaching staff has seen a change in Liam, and they know he has worked too hard just to get back to Arizona that he won’t go down without a fight to become a better player and teammate.

The support from the Goldwater football program helped ease the transition back to football.

“I love the players, I love the coaches, I love the school,” Liam said. “I wouldn’t trade anything that I’m doing right now. I’m proud to be a Bulldog.“

In a season of ups and downs, he leaned on the support of his family. His father attends his games and before each time he goes out to the field, he reads a letter his mother sent him saying she was proud of him. It’s a little reminder that his family is with him even if they are 5,000 miles away with an eight-hour time difference.

“I haven’t heard his voice in way too long,” Liam’s mother, Jackie, said. “I miss his smile. He has the most wonderful smile, but never believes me. And (I miss) his hugs.”

But Liam can feel his how proud his mother is of him all the way from Ireland.

“I’m really proud that he’s done something that is so hard so he can try for his dreams,” Jackie said. “Because there are no guarantees and he is aware of that. I’m really proud of the way he’s taken that on. He’s really determined and decided that that is what he wanted to do, and he’s gone for it.”

He has the support of his family, but also acquired a new family in the process of joining the team. The coaching staff at Goldwater rave about his work ethic and are looking for opportunities at the next level for the senior.

“If you want a six-foot-three wide receiver with a 30-inch vertical, give us a call,” Goldwater head football coach Rich Metcalf sad.

He continues to work to learn the wide receiver position. He plans to walk on at a local community college and use those two years to hone his craft and try to make it on a big time college program, specifically one with streaming capabilities to Ireland.

“I want them to be able to see me play,” Liam said. “I hope I get the opportunity, and I know I’m going to make the opportunity when I do. I need and I want this more than anything.” 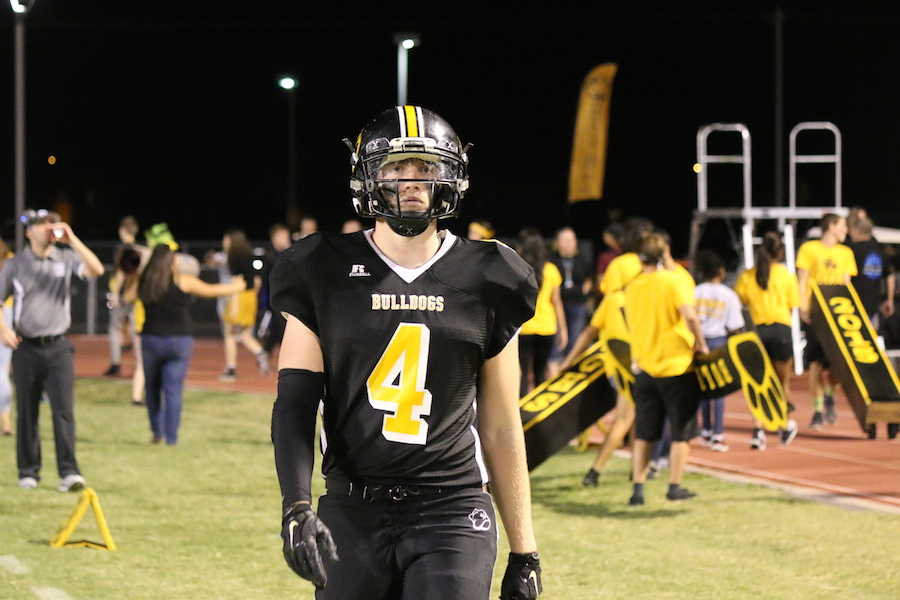