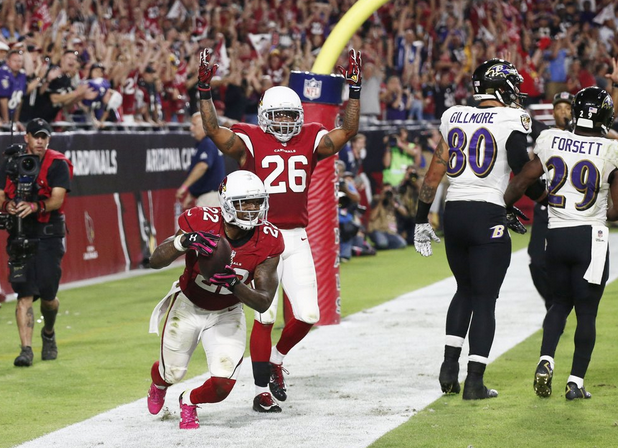 Pro Football Focus https://www.profootballfocus.com is the leading metric source of football in the world. Based in the UK, PFF grades every NFL player’s every play on a scale of -2 to +2 using half point increments.

I was surprised to see that Cardinals quarterback Carson Palmer is ranked as Pro Football Focus number one quarterback ahead of Tom Brady. Here is what they wrote.

1. Carson Palmer, Arizona Cardinals, 96.0
Palmer put on yet another clinic on Monday Night Football, as he spread the ball around and sprinkled in his usual helping of big-time throws against the Ravens. The Arizona QB now leads the league in big-time throws (BTTs) with 23, mixing them in on 8.95 percent of dropbacks (also the highest in the league).

Pro Football Focus also had high praise for Cardinals wide receiver John Brown, ranking him atop the list for 5 breakout performers this season.

John Brown, WR, Arizona Cardinals
2014 grade: 72.4 in 678 snaps
2015 grade: 84.5 in 377 snaps
Although John Brown had a solid rookie season, his 2014 performance doesn’t quite match the high standard he’s set for himself this season. Brown’s numbers are up across the board, most notably in catches per target. After making the grab on 52.5 percent of his targets as a rookie, he’s now catching 74 percent in year two. The yardage output has improved, also; Brown has already gained 562 yards at 2.53 yards per route run, compared with 696 yards at 1.52 yards per snap in all of 2014. Some of that has to do with the fact Carson Palmer has returned as his QB, but Brown still had a few poor games prior to him going down with an injury last season. Brown has also been far more productive in the intermediate game (10-to-19 yards), where his QB rating when targeted is above 120, almost double what he produced in 2014. With the seventh-highest receiving grade at the position, Brown is giving the Cardinals a legitimate threat opposite

Larry Fitzgerald and their offense is improving because of it.
The site also loves the Cardinals’ secondary, ranking them first.

The brilliance and playmaking of the two LSU products in Mathieu, who is currently PFF’s No. 2 cornerback, and Peterson (No. 2 in coverage snaps per reception allowed at 20.3, and No. 5 in NFL QB rating allowed, at 50.9) anchor our top group. In addition, the continued improvement of Tony Jefferson, who sealed the victory against the Ravens on Monday night with an interception in the last-minute, and the versatility of safety-turned-linebacker Deone Bucannon, give Arizona four very young defensive cornerstones. PFF’s John Breitenbach provided even more details on the Cardinals Wednesday.

Sure, it’s only the midpoint of the season, but the 5-2 record has quite a bit of statistical data to back up just how impressive of a season that the Cardinals are having.