Football can run in a family’s genetics.

Read-options and blitz-pickups are passed down from generation to generation like hair color and height.

This is the case for the Stallworths over at Yuma Catholic High School. Head coach Rhett Stallworth has built the Shamrocks into a Division V power, including an undefeated season and state championship in 2014.  Last year’s team featured Division I college football players Matt Pistone and Donovan Rooks, as well as quarterback Jagan Cleary, who lit up the scoreboard his senior year at Yuma Catholic and is currently at Lake Forest College.

The Shamrocks have made the jump to Division IV, and this year’s quarterback, Stetson Stallworth, is Rhett’s nephew, who is in his first year with the Shamrocks after transferring from national power Bishop Gorman.

“It was a big change going from big city to small town, but football is football; we both play on 100-yard fields and either way the team with the most points wins,” Stetson said.

“When you live in Las Vegas, there is quite a few distractions and you get to point where you need to decide if you’re going to be a part of those distractions or not,” Rhett Stallworth said.

“He said, ‘I want to be away from these distractions’, and get back to Yuma where they are from and there are 40 of 50 people in his immediate family living there so it was more of a family decision more than anything else.”

Now surrounded by his family, Stetson adopted a Shamrock family, including a big brother in his predecessor, Jagan Cleary, who helped Stallworth get acclimated to a new system.

“He was great,” Stetson said. “Teaching me little things about certain plays and footwork and just the little things that no one really sees, but it is the behind-the-scenes stuff that makes the difference.”

The behind-the-scenes stuff led Stallworth to the starting job and has led the Shamrocks to an undefeated season. The first-year quarterback has 36 total touchdowns to seven interceptions entering Friday.

While his head coach and position coach is family, don’t expect any special treatment.

“On the field, he is going to be yelling at me more than anybody, but it’s because he cares and I love it,” Stetson said. “Sometimes I will smile when he yells and he hates that.”

For his head coach, it’s simple.

“Football has always been a big part of our family and now it’s just a little more hands-on now that I’m actually coaching him and coaching his position.

It’s just like any other player so that’s how it goes.”

No Luck Needed: Yuma Catholic On Radar Of College Programs 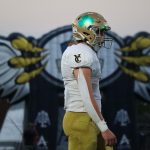