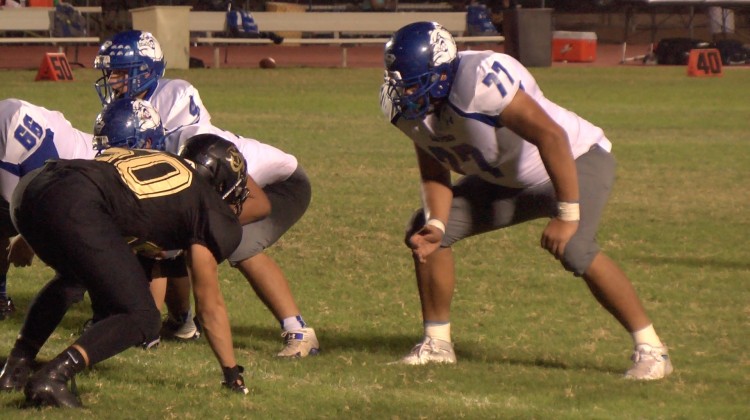 There has been a common theme from my stand point this season whether it has been from going to games or talking to others about the high school football scene in Arizona. There is always someone who seems to catch my attention that is “only a sophomore” or “only a freshman.” It has happened almost every week.

So as we have almost completed the 2015 regular season, I have decided to compile my list of “only a sophomore/freshman,” who have emerged this season and could continue to be great for years to come.

Ralph Frias, Safford, OT, Sophomore – A 6-6, 310 pound super star in the making. Frias might one day go down as the best player to come out of Safford high school. His size speaks for itself but he can also really play football. My colleague Eric Sorenson did a great feature getting to know this young man which you can see here. His video speaks for itself.

Jahwar Jordan, Hamilton, RB, Sophomore – I was very excited to see how the freshman phenom for the Huskies was going to translate this season at the varsity and lets just say he has not disappointed. Jordan has broken off some of the best highlights of the season showing off his great speed in quickness many times. His role was much bigger than I think any expected coming into the year but when the team lost senior Rico Tipton, they needed Jordan to help fill the void. Seniors Austin Lowe and Rashad Williams have also done a great job stepping up as veterans and deserve a lot of credit. When all is said and done for Jordan’s career however, it is going to be cool saying we remember seeing him make plays as a young sophomore on the varsity level.

Chris Manoa, Chandler, DT, Sophomore – There are not many 6-1, 300 point defensive lineman in the state but the Chandler Wolves have one of them and he happens to be a sophomore. Manoa has done a masterful job of plugging the gaps on this talented defensive line. Chandler has had some great defensive tackles over the last few years with Cruz Flores, Jordan Hoyt, J.W. Windsor and Mano’s current partner in crime, senior Thomas Chisholm. Manoa is the latest in the tradition at this position for the Wolves and has some great years ahead of him.

Tre O’Guinn, North Canyon, LB, Sophomore – This young Rattlers player is sixth in the entire state in tackles, with 12 tackles for loss and two sacks on the year. North Canyon has some talent contrary to their record this season and we have watched Seniors John and Nimi Okwoli and junior Austin Jackson get most of the pub on this team which is well deserved. However, seeing a sophomore produce on the defensive side of the ball the way O’Guinn should not go unnoticed and very promising for the future of this program.

Cole Phelps, Mingus, RB/LB, Sophomore – When Cole Phelps is a senior, there is little doubt in my mind he will be flirting with school records as it pertains to tackles and also possibly touchdowns. The Marauders two-way star leads the team in tackles on the season and is also one of their many options at running back. He is a flat football player and someone who could be on the radars of schools at the next level when all is said in done because his overall ability to play the game. We can’t forget another sophomore teammate of Phelps’ is just outside the top ten in the state in sacks this season and goes by the name of Tyler Kelly.

Rocky Perez, Desert Edge, RB, Sophomore – Desert Edge’s rushing attack is once again among the best in the state at any level with their talent and monster offensive line. You would be surprised to know that their leading rusher based on carries and yards is not one Roshaun Johnson to duel-threat quarterback Tehran Thomas. It is sophomore Rocky Perez. With Johnson spending time on both sides of the ball playing linebacker as well, it has created the opportunity for Perez to get extra carries and he has received those and then some. He is a workhorse who is just under 10 yards per carry on the year. To think, Perez, Johnson and Thomas will all be back next season for an already fantastic Scorpion team.

D’Shayne James, Perry, WR, Freshman – Nate James has been filling up the stat sheet receiving-wise for the Perry Pumas this season and his younger brother D’Shayne is a star in the making. The freshman caught a touchdown pass in each of his first two varsity football games this season. Already standing 6-2, 190 pounds at his age, he looks wide beyond his years on the football field and could be another one of those guys that you say in four years, “I remember watching him as a freshman.”

Spencer Rattler, Pinnacle, QB, Freshman – There were big shoes to fill when Brian Lewereke graduated and went off to play for Michigan State. Coach Dana Zupke knew he has something special in Rattler when he arrived and participated in spring ball  months ago but I don’t think even he thought it would happen this fast. When you hear people talk about Pinnacle, you hear them say, ‘yeah they are actually a lot better than I thought they would be.’ A fair assumption with the amount of youth on their team and the key departures they had from last season. But this young team has bought in and played very well, led by their freshman quarterback. You can’t help but notice Rattler’s poise on the field for his age when watching him. He will most likely also show up in this type of article when basketball season rolls around as well. The young man is a special athlete.