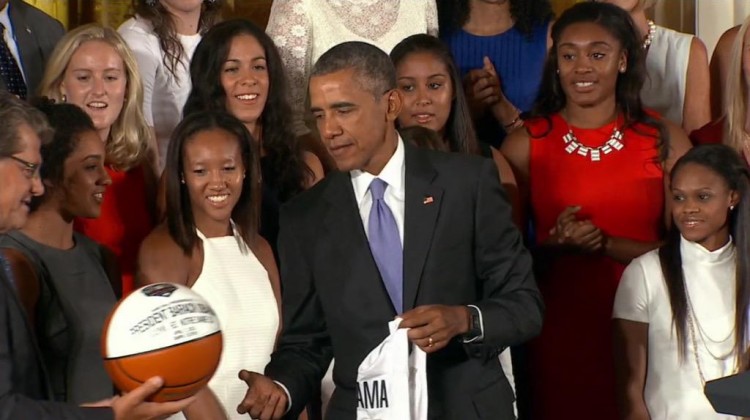 A former Arizona high school standout on the hardwood was representing Phoenix at the White House on Tuesday.

Former St. Mary’s basketball star Courtney Ekmark was at our Nation’s Capitol along with her new family, the UConn Huskies Women’s Basketball team as they were introduced by President Barack Obama as National Champions from this past college basketball season.

Great trip to the White House today. Cool to see how much history has been made there. pic.twitter.com/iN081LEeO2

The experience Ekmark and her Husky teammates were able to take in was once in a life time. “We got up at 4 am and flew to Washington as a team,” Ekmark explained. “We toured the monuments and took a bunch of photos.  In addition to the White House, we had a cool lunch at Old Ebbits Grill.  We then flew back the same day so it was a long day but well worth it.  Another cool part was that we got to see Kiah (Stokes) and Kaleena (Mosqueda-Lewis), former teammates who are now playing in the WNBA met us in DC.”

After one season with UConn, Ekmark’s experience has been a bit of a roller coaster. You may recall that she took a year off from organized basketball her senior year of high school to train and focus on her game to better prepare herself for what was to come. It also allowed her to spend extra time with family as well. She arrived in Mansfield, Connecticut before her freshman season eager for what was to come both from a team stand point and personally. But she had a frustrating speed bump along the way. “You come to UConn to win championships so I am glad that we accomplished that,” Ekmark mentioned. “Personally, it was a tough year in that I had a stress fracture in my foot that bothered me during the start of practice and then forced me to sit out for six weeks at the beginning of the season.  That put me behind but I am glad that the team was able to win the championship. The uphill climb that was her freshman year is now behind her. She is now eager for year number two with the Huskies-now healthy with a chip on her shoulder. “The good news is that my foot is now completely healed,” she said. “It has been almost three years since I have felt this good physically.  I am getting back to where I was a few years ago.  I still have plenty of work to do but am getting better every day and really looking forward to this season.  As always, the goal here is to dominate every day, whether it is a practice or the final four, and win the national championship.  That never changes,” Ekmark and the Huskies begin their 2015-16 regular season on November 16th with a big road matchup against Ohio State.