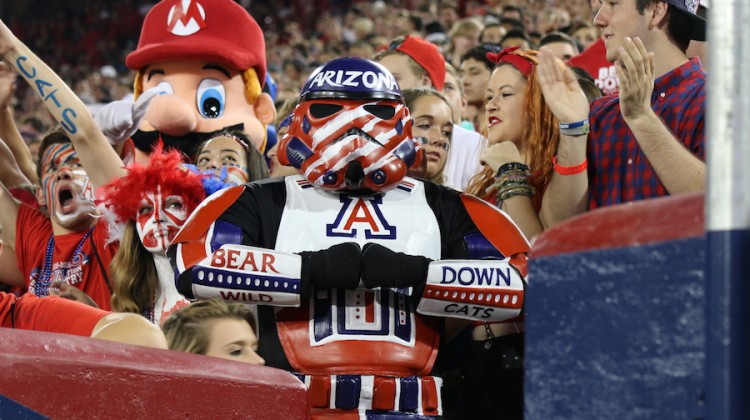 There was an in-state college football battle Saturday night between the Arizona Wildcats and Northern Arizona Lumberjacks. When it was all said and done, the Wildcats were able to flex their offensive muscles and defeat NAU 77-13.

Here’s what we learned about both teams Saturday night:

Record Breaking Performance:  The Arizona Wildcats offense was clicking on all cylinders Saturday night, posting 77 points, 792 yards with 499 of those coming on the ground, all school records. Anu Solomon ended the day with 285 passing yards and 4 touchdowns. Nick Wilson continued his impressive 2015 campaign with 143 yards and two scores.

Big Catch Dave:  Senior wide receiver David Richards was Anu Solomon’s favorite target Saturday night, ending up with eight catches, 120 yards and two touchdowns. Richards has already matched his season high in touchdowns with three, when he hauled in that many scores in 2012.

Protectin’ the Ball:  Through three games, Anu Solomon has thrown ten touchdowns and rushed for one more…and maybe just as importantly has not thrown an interception in 2015. He will look to continue that trend as the Wildcats defend their Pac-12 South title.

Sure-handed Lumberjacks:  The Northern Arizona duo of Emmanuel Butler and Dejzon Walker had an impressive performance against the Wildcats, hauling in ten catches for over 200 yards. Butler nabbed a 62-yard touchdown from Lumberjack quarterback Case Cookus.

Moving forward, the Wildcats open Pac-12 play as they host UCLA this Saturday. The 2-1 Lumberjacks continue their season and head up to Montana to face the Grizzlies next week.