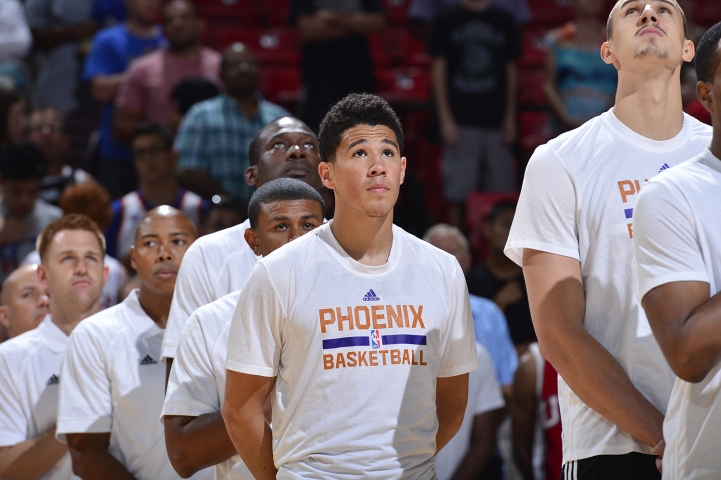 For the second time in three years, the Summer Suns made it to the Championship game of the Las Vegas Summer League team. Last night, ultimately fell to the all to familiar foe, the San Antonio Spurs with the 2015 Summer League title.

The team consisted of the Suns’ first round picks from the last three season as well as some players who are familiar from their time in college or also short stints with other NBA teams as well.

I went one-on-one with Suns General Manager Ryan McDonough who provided some of his insight on what he saw from the Suns in the 2015 Las Vegas Summer League.

On 2015 first round pick Devin Booker’s play in Las Vegas:

Devin played very well throughout summer league. He didn’t shoot the ball as well as he is capable of early on. I think as a young player, you are trying to figure out where your shots are going to come from while getting used to your teammates. But I’ve been very impressed with his defense because he has been consistent defensively. I think in Summer League there is the tendency to relax a little bit on the defensive end and look for your points but he didn’t do that at all. He’s done the opposite.

We knew his shots would fall and it was fun to see him break out for 31 points on Sunday. What was fun what I took away from that game is that he is not just a spot up shooter like we thought that he was and I think when you play on a talented team like Kentucky, you get pigeon holed a bit because that was his role at Kentucky. He shot threes, made free throws. I think we saw some of his versatility. He’s able to catch and make plays off the dribble and take it to the basket and create for others. It’s all been very encouraging so far.

On 2014 first round pick T.J. Warren having another fantastic Summer League performance:

T.J., he just has enact for getting to spots and putting the ball in the basket. I think we would like to take credit for a lot of it but he has a lot of things that you can’t teach. He did it at NC State, was ACC player of the year and one of the leading scorers in the country. He just has a really good feel for how to get by his man and how to get to spots where he is comfortable shooting the ball. He’s pretty efficient which is rare for a young guy. Most guys score a lot of points taking a lot of shots at a young age and then learn to be more efficient later in their career but it is very encouraging for us that he already knows how to score efficiently without taking a ton of shots. He’s a very creative scorer and are very encouraged by the progress he’s made. And we are proud that he made the All-Summer League Team for the second year in a row.

Warren’s game is so unique. Who would you compare it too? Paul Pierce?

He is unique and I think Paul Pierce is a pretty good comparison. If T.J.’s career in any way resembles Paul’s I think we all would be very thrilled with that. I was with Paul for 10 years in Boston when we won a championship together and I think the similarities are with their uniqueness of how they get their shots off and how they create shots. Paul Pierce doesn’t shoot the same shot every time. He’s more of a feel player who even from the free throw line, changes up how he shoots. Knowing how to get to certain spots and knowing how to get to what they want to do based on how the defense is playing them and getting shots off, there are some similarities there. As far as Suns go, I’ve head comparisons to T.J. and Cedric Ceballos as well but T.J. is certainly a unique player with a unique game.

You’re right, those guys are in their third year and I think it’s crazy to think still ho young those guys are. Alex just having turned 22 and Archie at 20. They’ve done great and Alex, we’ve sat him out the second half of back-to-backs this summer just to be cautious. He’s obviously had his injury issues over his career so far. But he is completely healthy and we have done that for no other reason than an abundance of caution. Really his ability to rebound and protect the rim stands out at the Summer League level and even at the NBA. He made great strides doing that last year. And one of the things we wanted to develop was his offensive game. I think you could see in the Summer League that we are going to him more in the post, we’re working with him on the pick-n-pops, he’s got a really good stroke for a big guy and I think in time he is going to be a really good shooter.

The with Archie, he’s gotten stronger and stronger. He’s always been aggressive and been able to get to the basket and get to the free throw line. I think we’ve seen his free throw stroke improve a lot. He shot a good percentage in Summer League and the stroke looks good and I think with the added strength he is able to power through contact now and not get knocked off his spot as easily. And I am proud that he is shooting his open shots now. In the past he was more comfortable driving. He would get to the basket easily and then teams would sag off of him so he had an adjustment to make so now when he gets an open shot, he shoots it.

I’ll give you two guys who have really stood out. Mike James and Josh Harrelson have done a really nice job for us. For Mike, I’ve got to give all credit to Pat Connelly our Assistant GM. He identified Mike and has followed his career. He’s a guy that started at lower levels of college basketball, worked his way up to European basketball and recently signed with one of the top teams over there. He was great for us. A great combination of athleticism and shooting, unselfishness and has really developed as a point guard, how to read the game and run pick-n-roll’s. He’s really been a pleasant addition to us.

Josh Harrelson is a guy who has been in the NBA. He’s a big guy but has a really good feel and a really good stroke. I think what you are seeing from the three point line, he missed a few the last couple of nights which finally dropped him below 50% from three for the Summer League which for a guy who is 6-10 plus is pretty impressive. Those two guys have really helped themselves and I think have been a big part of our team’s success as well.