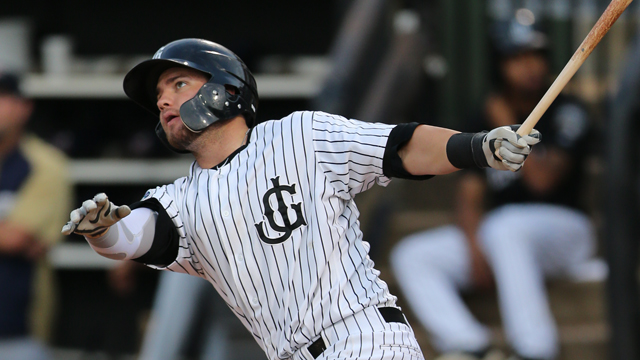 Former Arizona High School Baseball standouts have been making headlines in the minor leagues over the last week. The following is a look at some of those players plus how they have fared to this point in the 2015 baseball season.

D.J. Peterson: The former Gilbert Tiger has had a monster season in the Seattle Mariners organization and is now just on the cusp of getting his first call up to the major leagues. On Wednesday, the former first round pick was called up to AAA after hitting .223 with 80 hits, seven home runs and 44 RBI in 93 games in Double-A Jackson of the Southern League. He now heads up to Tacoma to suit up with the Rainiers as their new third baseman. Peterson is considered the Mariners number four ranked prospect.

Dustin Peterson: Cannot talk D.J. without checking in on younger brother Dustin who if you remember were drafted on the same night a couple years ago. Dustin, who was drafted by the Padres organization, was involved in the deal that sent Craig Kimbrel and Justin Upton to San Diego bringing him to the Braves organization before the start of the season. He has played in 82 games in Single-A (adv) for the Carolina Mudcats where he has hit .258 with 78 hits, six home runs and and 39 RBI’s playing in the outfield this season. Peterson is considered the Braves’ 17th ranked prospect.

Cody Bellinger: The former Hamilton Husky is now considered the number eight prospect in the Los Angeles Dodger organization has been on an absolute tear as of late. On Tuesday night, he hit his 19th and 20th home runs of season which made it three in his last three games. Overall, he is hitting .246 with 90 hits, 25 doubles and and 69 RBI’s to go with his 20 home runs in 96 games played at first base for the Rancho Cucamunga Quakes at the Single-A (adv) level.

Mitch Nay: Bellinger’s former teammate at Hamilton is now the 13th ranked prospect in the Toronto Blue Jays organization suiting up for the Dunedin Blue Jays at the Single-A (adv) level. Playing in 93 games as the every day third baseman, Nay is hitting .257 with 87 hits, five home runs and 38 RBI on the year. After hitting just over .200 in April and May to start the year, July has been a whole new ball game as he has hit .349 for the month tallying 30 hits in 23 games.

Jamie Westbrook: The former Basha Bear playing for the hometown Diamondbacks organization has had a very productive 2015 season. Out of spring training, he was going to be headed to play for the team’s new affiliate this season, the Kane County Cougars of the Rookie League. However, the organization gave him the bump up to the Visalia Rawhide of the Single-A (adv) league and he has made the most of it. In 86 games as the every day second baseman, he is hitting .286 with 93 hits, 4 triples, 10 home runs, 45 RBI and 11 stolen bases in 12 attempts in 86 games played. The organization loves the pop in his bat and his ability to display speed at a middle infield position as well.

Cole Tucker: The former Mountain Pointe standout and first round pick of the Pittsburgh Pirates has been a speed demon for the West Virginia Power in Single-A (full). As the every day shortstop, he has 25 stolen bases in 31 attempts to go with 88 hits, 13 doubles, two home runs and 25 RBI in 73 games played. He has been a monster in July in particular hitting .320 with 27 hits and six stolen bases in 20 games. Tucker is considered the Pirates 10th ranked prospect.

Dylan Cozens: The former Chaparral Firebird is hitting the cover off the ball as of late in Single-A (adv) playing for the Clearwater Threshers in the Phillies organization. In his last 10 games he is hitting .429 with two home runs and seven RBI’s running his season numbers to a .285 average with five home runs and 36 RBI’s in 72 games. He also has 12 stolen bases on the year which is not too shabby for a guy who stands 6-6 but those of us who saw him both on the baseball diamond as well as the football field are not surprised. Cozens is ranked the 24th ranked prospect in the Philly organization.