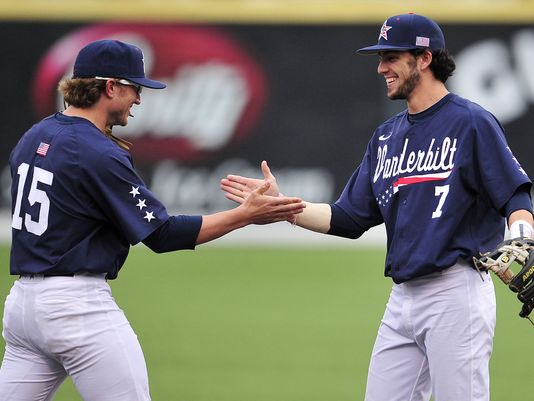 The NCAA baseball postseason continues, and Super Regionals are upon us.  The results of this weekend will dictate the eight teams that will step on the hallowed grounds in Omaha a few weeks from now.   There are plenty of top prospects still in the field of 16 that could hear their name called as the top overall pick for the Arizona Diamondbacks.

The experts continue to link the Vandy shortstop to the D-Backs as their top pick. It isn’t a foregone conclusion that is where the Snakes will go, but Swanson, the MVP of the Nashville Regional, is proving why he is a top prospect in this draft.

Swanson also showed he can come up in the clutch offensively and defensively. In the ninth inning, in a tie game with Indiana, Swanson hit the go-ahead two-run home run, and then flashed the leather to help seal the win for the Commodores.

“Filthy Fulmer” was, well, filthy in his Game 1 win against Lipscomb.

Fulmer has always been projected as a top-10 pick and is among the top arms in the country.  The Vandy junior has been deemed by some the “most complete college starter in the draft and will have one more chance to prove to the Diamondbacks why he is top pick worth as they open up their Super Regional at Illinois.

Jay will be in charge of limiting a Vanderbilt offense that put up a 21-spot on second-seeded Radford in the regional final. A predominant reliever, he will have a chance to appear often against the defending national champs. Jay appeared in only one game in the Champaign Regional, but that was due to the Illini’s first two starters pitching complete games. Jay was impressive in the Regional finale, earning his 14th save on the year:

Draft experts continue to say if the D-Backs go pitching, Jay will most likely be their guy.

The LSU shortstop continues to shoot up the draft charts. A Golden Spikes award winner (Swanson and Fulmer are also on that list), Bregman posted a .323 batting average in 2015. He led the team in runs with 55 and walks at 35 and is the conference leader in stolen bases at 34. Bregman is on the smaller side, but he believes he can still play the position at the big league level. Bregman has had a phenomenal year, but was quiet in the Regional:

The Tigers will need Bregman to bounce back in the Super Regional against Louisiana-Lafayette.  Here’s a little bit of what he did in last year’s postseason: