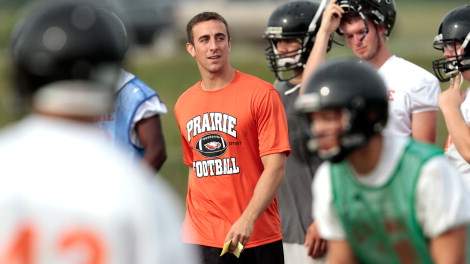 Many sons of high school football coaches want to grow up to do what their old man does. For Mike Morrissey, new head coach of Desert Mountain High School, watching his father as a kid showed him exactly what he wanted his own coaching philosophy to be. Especially when it comes to off the field.

“I remember watching kids come back to see my dad years after they had graduated,” Morrissey told Sports360AZ.com in a recent interview. “The huge amount of time kids would spend with my family even after high school. It was important to him to help shape his players into men with skills for life after high school.”

Ed Morrissey was a hall of fame coach in Iowa for 27 years, winning a state championship at Pleasant Valley High School. His belief that a coach should help players become good people off the field, as well as skilled athletes on it, is used now by his son. Mike, 32, spent the last four years coaching at Prairie High School in Cedar Rapids, Iowa.

“Total effort in everything,” said Morrissey. “I was taught that by my dad at a young age. It applies to any area of life. Everybody is competitive and wants to win. But football ends for everyone at some point. We want to help guys become the best they can be as husbands, fathers, and people in the community someday.”

Morrissey’s wife is from Glendale and the two of them decided it was a good time to move back to the Phoenix area to raise their two daughters, five and three years old. Desert Mountain went 1-9 last season and Morrissey feels the players and community are willing to patient with what it takes to turn the team around.

“I think there’s a culture change that’s starting,” noted Morrissey. “We’ve gotten a lot of support from boosters, administration, and families. Everyone understands it’s a process that takes time but the future is bright.”

As Morrissey wraps up his teaching obligations back in Iowa new offensive coordinator Kurt Warner is handling spring workouts.

The Super Bowl champion and former NFL MVP has been working overtime with quarterback Austin Nuessle who is entering his second season starting. He threw for 25 touchdowns last season in a spread system but look for the Wolves to switch to more traditional, under-center sets with Warner implementing his own style.

Warner’s son, Kade, is one of Desert Mountain’s better players on the young roster.