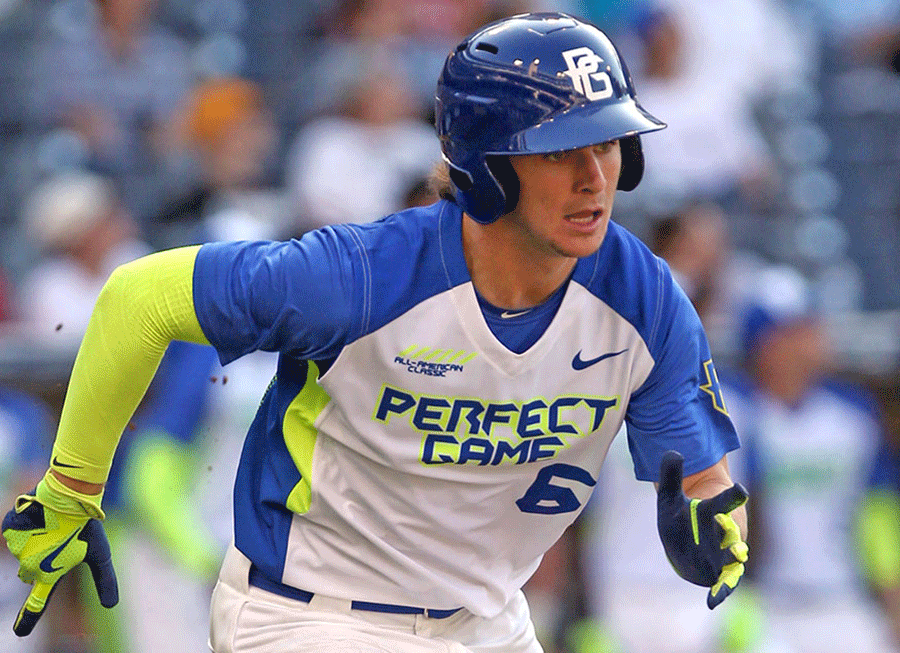 The 2015 MLB First-Year Draft is exactly one month away, and the Arizona Diamondbacks hold the coveted first overall pick.

The last time the Dbacks held this position, they went with a talented, game-changing shortstop in Justin Upton.  Upton eventually made the transition to the outfield, and spent six seasons with the club.  While he was named to two All-Star teams, it seems like he never met those initial, and potentially unattainable, expectations so many put on him when he was drafted.
That 2005 first round also included All-Stars Alex Gordon, Ryan Zimmerman, Ryan Braun, Troy Tulowitzki, Andrew McCutchen, Jay Bruce, and Jacoby Ellsbury.  But Upton was going to THE guy. No ifs, ands, or buts.  Unlike 2005, there isn’t necessarily a clear-cut #1 pick in 2015.
Here are just a few of the routes the Snakes could go with the top pick:
Brendan Rodgers, SS, Lake Mary HS (FL):
Scouting reports say Rodger’s bat, arm, and power are all plus tools.  Standing at 6’1″ 190 lbs, Rodgers has good size for a shortstop and a power bat.  Some scouts say his ceiling could be a Troy Tulowitzki-type performance at the major league level.
Mike Matuella, RHP, Duke
Matuella has worked on his pitching repetoire the past year, going from a basic two-pitch arsenal to four pitches.  He also integrated a two-seam fastball, giving some movement to mid-90s velocity.  He had a strained lat early in the year, and it was reported earlier this year he has an injured UCL, which requires Tommy John Surgery.  He also suffers from Spondylosis, which causes pain and degeneration in the spine.
Dansby Swanson, SS, Vanderbilt
Swanson provides versatility to play both middle infield positions, and is an outstanding fielder.  He doesn’t have the power of Rodgers, but can get on base.  He is hitting .354 with seven home runs and 43 RBIs this year at Vanderbilt.  Swanson is a proven star, winning the Most Outstanding Player in last year’s College World Series, and also has phenomenal athleticism and a mind for the game that scouts love.
Carson Fulmer, RHP, Vanderbilt
Swanson’s teammate started his career with the Commodores as a closer, but was an absolute workhorse in the rotation during Vandy’s College World Series run last year.  He has a fastball that can touch the high 90s, and his throwing motion hides the ball well from hitters.
Kyle Funkhouser, RHP, Louisville
Funkhouser is a proven pitcher not only at the collegiate level, but also on Team USA last summer.  He is a big-bodied pitcher that has an arsenal of pitches that produces a lot of ground balls and strikeouts.  Opposing hitters are hitting just .211 against him, and he has 77 strikeouts in 82.1 innings pitched.
Dillon Tate, RHP, UCSB
Tate was the closer for Team USA, and has had a lights out year for the Gauchos.  He strikes out 9.15 per nine innings, and has a 1.63 ERA.  Tate has an ability to keep his pitch count low and go deep into games.  His shortest outing on the year so far has been 6.2 innings.
These are just a few of the names that could be called first come draft day.  As the draft approaches, expect rumors to fly, stocks to rise and drop, and a whole bunch of smokescreens.

D-backs And Dansby: Swanson Proves Why He Is Top Pick Material

Sticking To The Script: Swanson Has Day Fit For Silver Screen