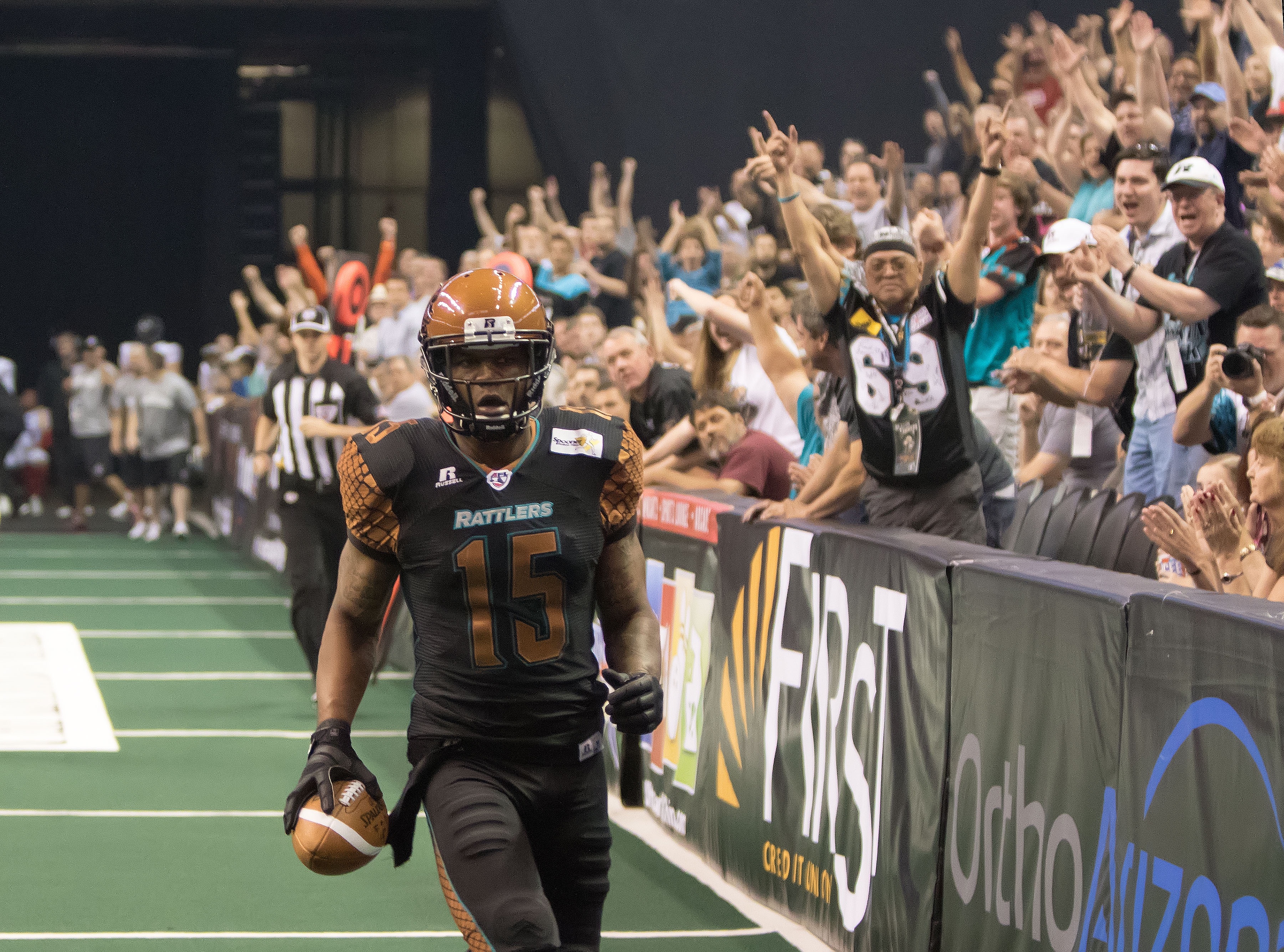 The Arizona Rattlers returned after two consecutive road games in which they went 1-1 to face the Portland Thunder and move to 3-1 on the season with a 65-47 win over their West Division rival.

Continued dominance – The Portland Thunder have not been kindly welcomed to the Arena League by the Arizona Rattlers. The Thunder had their Innagual season in 2014 and saw themselves fall to the then two-time defending champion Rattlers four times. However in the fourth game, they were on to Kevin Guy and company as they gave the Rattlers their toughest battle of the playoffs in the opening round. The Thunder had a chip on their shoulder Saturday night hoping to get that first win over Arizona but once again came up short and have fallen to 0-5 against the now three-time defending champs.

Davila’s Dominance – There isn’t a lot left for Nick Davila to do that we have not already seen. The reigning MVP of the AFL so far this season is showing now signs of slowing down. He carved up the Portland defense completing 31 of 44 passes for 319 yards and NINE touchdowns. He did throw one interception on what was a phenomenal play by the reigning defensive player of the week, Bryce Peila. Other than that, he was a surgeon making great plays all over the field and doing what he does best.

The Touchdown Machine – Rod Windsor has played in just two games now for the Rattlers after missing the first two to begin the year. You wouldn’t know he has played in just two however when you look at the stats he has compiled. In two games, he now has 254 yards receiving and TEN touchdowns combined. Against the Thunder, he compiled 14 catches for 141 yards and six scored. He is truly one of the most dynamic receivers in the game which continues to be the case now in 2015. Davila didn’t have Windsor or Kerry Reed (who also had a huge game against Portland with 10 catches for 121 yards and three scored) and lost their first road game of the season in that time frame. But with those two back, the Rattlers are back as one of the most electric offenses in the league.

Pesky Marquis – Arizona’s defense was special in this win over Portland. Held them to just 13 points in the first half, forced two fumbles which they recovered, had one interception and forced two turnovers on downs. Defensive back Marquis Flyod was one of the big reasons to why the defense was so stingy. He forced both Portland’s fumbles, one of which occurred inside the Rattlers own five yards line. He was also a load on the Thunder’s receivers forcing them off their routes playing in press coverage. The defense as a whole now two games in a row has been fantastic and Floyd this time around was the one that stood out.

Kicking Conundrum – After Saturday night’s win, the Rattlers have now used six kickers since 2013. There started this season with Jeremy Shelly who was released after last week’s game against Cleveland going two for his first five in field goals. Kevin Guy signed a familiar face back to the team this week in Fabrizio Scaccia who first played with the Rattlers from 2010-11. However Saturday morning, Scaccia was a late scratch and guy held a day-of-game kicker tryout.

The one left standing to jump off the coach the day of a game and kick in the game was former Ironwood high school and University of Arizona kicker, Alex Zendejas. The former Wildcats did well initially booming kickoffs off the net and nailing his first extra point. But from there it was a struggle. He missed four extra points in nine attempts and after missing two in a row, Guy elected to try and run a fake extra point which failed. It was a tough go for the local product. It seems after all this time, Kevin Guy is still unable to have a kicker he can stick with long term.

The Rattlers are back in action next Saturday in Los Angeles to take on the Kiss. Kick-off at 7pm.