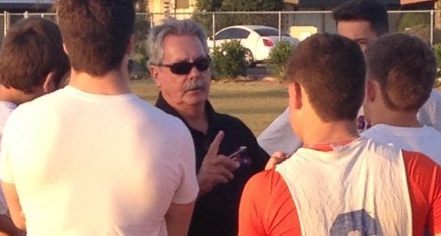 Jim Ewan knows he is walking into a school whose football team is on the rise.

The new coach of the Westwood Warriors talks openly about the job done by Spencer Stowers in bringing the program back from the bottom of the high school football pit. The team went 9-2 last season, a far cry from the 1-9 record three seasons ago when Stowers became their coach. Ewan speaks about his predecessor, in positive terms, both in an appreciative manner and in a personal, more reflective one.

“He did a really good job,” said the 65-year-old Ewan told Sports360AZ.com in a recent interview. “I think in a lot of ways I can see bits of myself when I started out as a young coach.”

Westwood may be the final step of a coaching journey for Ewan that began over five decades ago, when he was a third grader at St. Francis elementary school. Many kids grow up not knowing exactly what they might be when they grow up.

Ewan never had that problem.

“My parents both worked and wouldn’t come pick me up from school till around 5:00 p.m.,” remembered Ewan. “A teacher named Father Todd would let me hang around practice with him. I knew right then I wanted to be a high school football coach. So for a while I thought I had to be a priest to do that. Later I got that straightened out.”

“Jim is a lifelong coach,” said Steve Hogen, Athletic Director for Mesa Public Schools. “He’s one of those guys who has it in his blood. He’ll do it all his life.”

In the spring of 2001, Ewan was hired as the head coach of a team in need of a complete refurbish job. Chandler High School had fallen on hard times by the end of the 1990s. The dominant teams in Arizona big school football were mostly in Mesa and even in their own region, the school was losing their best athletes to the recently opened Hamilton High School down the road.

“They’d won three games the year before,” said Ewan. “We needed to tighten up when it came to discipline and get the kids into the weight room. It’s all about showing the kids that you have a plan and getting them to buy into what you’re trying to do.”

His first season ended with a 7-3 record and would begin a decade of resurgence for the Wolves. Ewan would lead Chandler to an 80-43 record in 11 seasons, coach future college stars like Dion Jordan and Brett Hundley, and was at the epicenter of a shift in the balance of power when it came to high school football in the state.

“I arrived at Chandler at an opportune time for me and the district,” said Ewan. “Chandler was having families move in, they were committed to the youth football leagues. They began having success at almost every sport in every school.”

After the 2010 season, Ewan decided that it was time for a change. He felt that he was getting toward the end of his career and believed it might be time to turn the program over to someone, in his words, younger and with some new ideas. But there was also a personal reason for his change in employment.

“My youngest daughter is married to a Marine Core pilot,” notes Ewan. “They spent four years in Spain and then he was transferred to Yuma. My wife and I missed being around them and we didn’t get to see them that much.”

So Ewan packed up and headed down south. The time in Yuma was split between football and family, as Ewan became an assistant coach for Yuma Catholic High School, and a grandfather to twins in 2013. When his son-in-law was told he was being transferred to Virginia this year, Ewan and his wife decided it was time to come home. When Stowers left to become the head coach at the newly build Queen Creek Casteel High, Ewan jumped at the Westwood head coaching job.

“I don’t remember the last time I was this excited,” said Ewan. “Westwood really represents every group demographically and socioeconomically, and I feel very comfortable with that kind of diversity. I’m excited about getting to be a head coach again.”