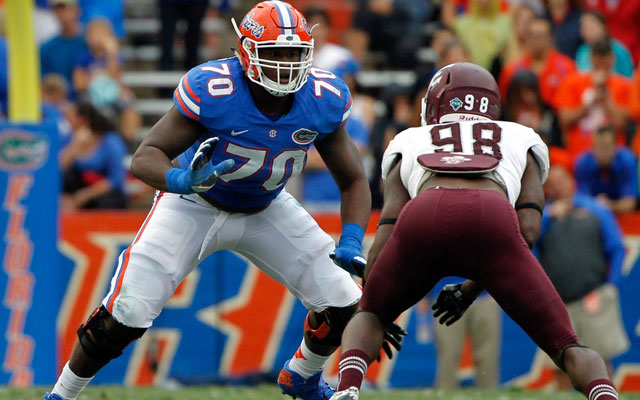 It took awhile but the Arizona Cardinals believe the puzzle is nearly complete.

General manager Steve Keim and head coach Bruce Arians opted to add to what is expected to be a much-improved offensive line selecting Florida’s D.J. Humphries with their first pick (#24 overall) Thursday night.

Two years after tabbing Jonathan Cooper in the first round, then adding Jared Veldheer and most recently Mike Iupati through free-agency, the agenda was clear: protect 35-year-old quarterback Carson Palmer in the defense-dominating NFC West.

The Cards said drafting the nimble, athletic Humphries made the most sense.

“He’s got tremendous range for an offensive tackle,” the former guard Keim told the assembled media shortly after the pick. “He’s got huge upside. We think he was the most athletic tackle in the draft.”

Keim and the staff had Humphries rated 13th on their board of 120 players and thought the 6’5, 315-pounder performed his best against the best, specifically Missouri’s rush end Shane Ray who the Denver Broncos traded up and selected one slot ahead of Arizona at #23.

All this despite playing only 19 games with the Gators and going against the advice of many in foregoing his final season of eligibility in Gainesville to enter the draft.

“I believed that I could be a first-round pick,” the gregarious Humphries said via conference call. “That’s the type of person I am – once I make a commitment to doing something, I’m all the way in.”

Humphries, who battled minor injuries in college, added weight to his frame eating “mostly meat and potatoes” but feels the added bulk is more of benefit than a hinderance. He consumed 5,000-calorie meals three times a day.

“I feel like I move the same but I’m a lot more controlled and a lot more balanced now,” he said. “I don’t know what it is but I definitely move the same, that’s for sure.”

Humphries relayed he’s more than open to play either tackle spot and is excited for his new life on and off the field on the west coast after growing up back east. His main focus area of improvement, according to him, is to become a more consistent player.

His new head coach knows the skill set is there.

“The things we were looking for in an offensive lineman,” Arians explained. “He possesses all of them.”