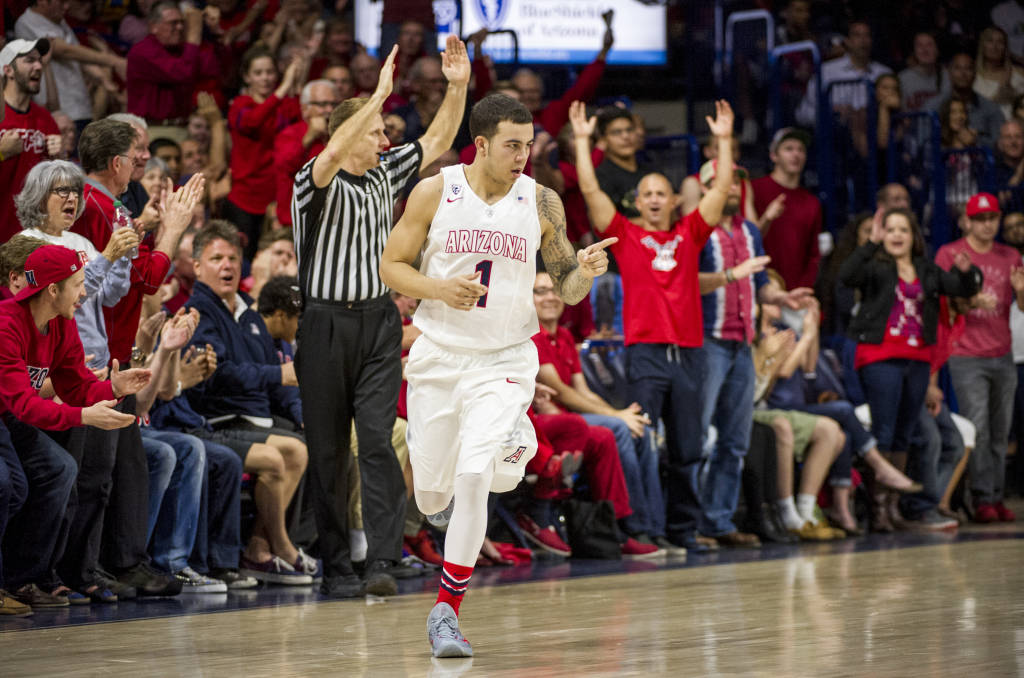 Sean Miller is right, there is a ton to be proud of for what the Arizona Wildcats accomplished in 2014-15. 34-4, conference title, consecutive Eight Eights. They are right on the cusp. Though it looks like at minimum, four of the start five will be gone from next year’s team, the Wildcats expect to be just as talented and capable for another run in 2015-16.

The Dream Lies with Kadeem: Having the name Kadeem while in an Arizona uniform has led to success in the past so why not in the future? Kadeem Carey broke record after record and was integral to the football program getting off the ground under Rich Rodriguez. Could a new Kadeem do the same to get the Wildcats over that Elite Eight hump?

Insert the player that many members of the Wildcats who played this season stated as one of the most talented and skilled offensive players they had ever seen, Kadeem Allen. In his first two years at the JUCO level playing for Hutchinson Community College in Kansas, he was a JUCO All-American and in 2014 was named the National JUCO Player of the Year by both the NABC and NJCAA. He expects to be the starting shooting guard for the Wildcats and if his game translates, could instantly become one of the elite scorers in the Pac-12. He can shoot, he has an uncanny ability to get to the foul line and his ability to score can also create opportunities for his teammates spotlighting that he can be fantastic passer when needed.

Allen spent the entire season redshirting and during practices, would compete as the upcoming opponent’s best player modeling what they do well and challenging his teammates in practice everyday. We heard similar stories of how T.J. McConnell did the same during the year he had to sit out.

Passing the torch to Parker: With senior point guard T.J. McConnell graduating, the torch is passed to Parker Jackson-Cartwright. The soon-to-be sophomore did not get a ton of playing time this season but did show flashes throughout the year showing a great ability to handle the ball and even score. The scary thing when you take a player like McConnell out of the game is the drop off you could have with a back-up in that spot. However, the drop off for little spurts over the course of a game when PJC would play was not drastic. There were a few times during this NCAA Tournament where he looked completely unfazed by the bright lights and made some nice offensive plays to the basket. Now can he do it as the starter? Time will tell, but he sure will have some big shoes to fill and could not have asked for a better teacher and role model to follow as a freshman.

Stacked Recruiting Class: Sean Miller has been a recruiting monster and he might have his deepest recruiting class in what is coming in next season. And boy, will it be important with the notion that McConnell, Rondae Hollis-Jefferson, Stanley Johnson, Brandon Ashley and possibly even Kaleb Tarczewski could be gone. That’s you’re starting five. But coming in is what is being considered the number one recruiting class in the nation consisting of four players in Scout.com’s top-50. 6-7 small forward from Las Vegas, Ray Smith who is ranked #14, #17 ranked Allonzo Trier at shooting guard from Findlay Prep who is said to one one of the top overall scorers from the 2015 class. Furthermore there is long, 6-5 point guard from Brewster Academy in Justin Simon who is ranked #20 by scout.com and ranked #46, 6-11 center Chance Comanche from Beverly Hills.

The Wildcats are also in play for two more premiere big man in the class of 2015 in Bishop O’Dowd star Ivan Rabb though many believe his commitment will ultimately go to Cal and Bishop Gorman standout Stephen Zimmerman is also yet to announce his commitment. There are many top 100 players coming to the Pac-12, namely UCLA, Washington, Cal and even USC so there expects to be a lot of great young talent in a conference that looks to have a much better season from a national perspective.

Hello, Mr. Anderson: Kadeem Allen isn’t the only player that was forced to sit out this season who could make a big impact in 2015-16. Boston College transfer Ryan Anderson will become eligible as well after being a spectator this year and is another player that brings a very intriguing skill set. At 6-9, Anderson is a very skilled player for his size with the ability to score and rebound which the Wildcats will definitely need if they want to continue their dominance on the glass. He was ACC Honorable Mention and the only BC player to start every game in 2013-14 posting 26 double-figure scoring games and five double-doubles.

We could see him in a similar capacity as we saw Brandon Ashley over the last three seasons as a stretch four type. He is very long and lengthy so he could have the ability to guard in the post as well as on the perimeter. Having all of these highly touted recruits joining the team is nice but having players with the skill set as Allen and Anderson who have now spent a year with the program every day should bring invaluable experience. Because of it, there may not be as much of a lapse in leadership with players like McConnell, Ashley and Hollis-Jefferson gone.

York’s Time to Shine: Since Gabe York arrived on campus after being one of the top high school players to come out of Southern California, it has seemed like every year there has been the notion of him possibly transferring. After the way he played in the Pac-12 and into the tournament this year, York and the Wildcat faithful saw how important a role he can play for this team. I don’t think the importance of that role will be any higher than it could for next year. Being a senior, having the experience to knock down huge shots in big moments and having the confidence now that he can do so should have him on cloud nine next season.

I am sure people through the grape vine will mention talk of him leaving once again, especially with how deep Arizona will look at the wing with Allen, Trier and Smith. But if he keeps things going the way he did in his junior season, I have trouble believing he is going anywhere and I believe he knows that his senior year will be his time to put his skill set on display not only for his teammates one more time in pursuit for a final four, but also for himself to prove that he has the potential to even success at the next level.