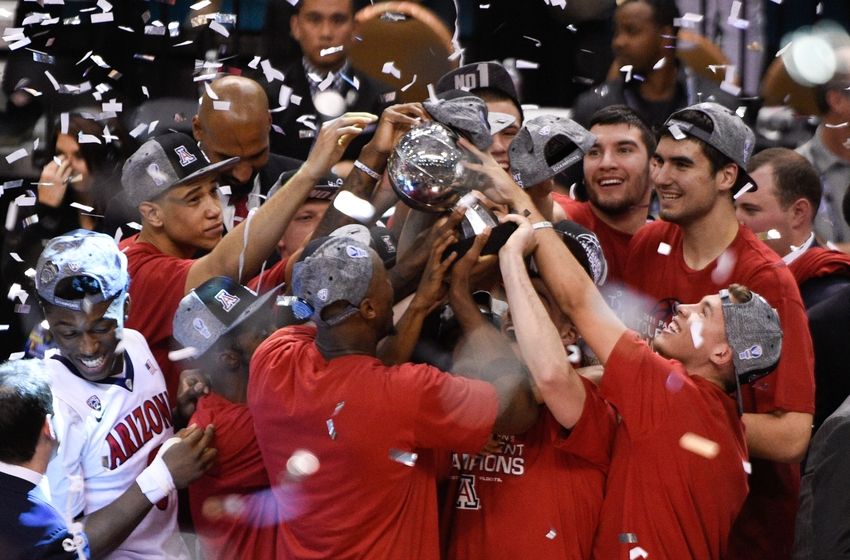 The Pac-12 Regular Season and Tournament Champion Arizona Wildcats have been named a two-seed in the West region for their pursuit for the first Final Four of the Sean Miller era. Their first game will be against 15th seeded Texas Southern on Thursday.

The Tigers from Texas Southern on Thursday will be a test as they beat Michigan State in East Lansing this season. If things go as planned thursday, they look at a Saturday meeting with the winner of Shaka Smart and the VCU Rams or Thad Matta and Ohio State. VCU is known for being a tough out in the tournament under Smart and the Buckeyes of course were the reason Arizona was eliminated in the Sweet 16 two years ago. Both would not be easy but both do not have the talent on their roster that they have had over the last several seasons.

A potential meeting with Baylor in the Sweet 16 could be in the Wildcats future. The Bears are the three seed and a good one at that. Like North Carolina, Baylor has had issues closing games but they have the athleticism to compete with the Wildcats for 40 minutes. Baylor offensively is comparable to the Wildcats as they have multiple threats that can score the ball. Six players score at least seven points or more led by Taurean Prince who is just under 14. Rico Geathers is also a force who averages a double-double.

The West bracket does not consist of Kentucky which was the hope to just about every team making they field but that does not mean the road to the Final Four will be an easy one. Atop the West region is the very team that ended the Wildcats 2013-14 season, Frank Kaminsky and the Wisconsin Badgers. Wisconsin has a path that could lead them right back to the West Regional Final with relative ease. Playing the winner of Oregon and Oklahoma State in the second round who have plenty of fire power but not the balance it takes to compete with the Badgers. Although, Oregon did give Wisconsin a run for their money in the tournament last season.

On Wisconsin’s side of the bracket, their toughest task looks to be North Carolina  who is the four seed. They have a lot of talent but don’t have a single player on their team that can close a game out for them. So many times we have seen the Heels have leads over teams like Duke on the road and then in the ACC Championship game in the second half against Notre Dame and then fall apart down the stretch.

The “last four in” teams the last couple years seems to be the teams who like to shock some teams early. The West Region has one of those game which includes BYU and Ole Miss on Tuesday. BYU has offensive fire power to be able to shock some teams as seen when they knocked Gonzaga off at Gonzaga just a few weeks ago.

If all goes as planned for the Wildcats and they make it out of the West Region  and Kentucky does their things as well, the two would meet in Indianapolis in the Final Four where anything can happen. Just ask the 1997 Wildcats. It’s nice to write it, but so much has to happen before it become a reality.

Overall, four teams from the Pac-12 made it into the field. Oregon as mentioned, the eight seed in the West. Utah at one point looked to be a lock for a three seed until falling to Oregon twice, Arizona and Washington in the last month of the season. They are now a five seed in the South region. Finally, one of the most controversial additions from the Pac is UCLA sneaking in as an 11 seed. Many thought they might not make it in as the resume isn’t exactly jaw dropping but they do have a win over Utah at home and played Arizona very close in Tucson and in the Pac-12 Tournament. Both Big Ten and Big 12 had seven selections from their conferences which was tied for the most from all conferences.