Got to love march! All eyes are on the great sport basketball and there are some very good local stories that are catching my eye heading into what expects to be an exciting weekend.

Heavy-Hearted Upshur: Quinton Upshur has been a very valuable player to the Northern Arizona basketball team each of the last two seasons. He has been their leading scorer and has received two straight years of All-Big Sky accolades. Wednesday against GCU, he had one of his most remarkable performances yet. He scored 19 points and knocked down some big shots in big moments.

He did all that however with a lot on his mind as soon after their controversial loss to Montana in the Big Sky Tournament, Upshur’s father had passed away. Asking him after the game about how hard that was and he told me he was playing with a heavy-heart. “There were a lot of different factors with stuff like that but I know he’d be proud that we got the win tonight.”

Up next for NAU is their third meeting of the season with Sacramento State. They split the first two meetings this season with the two games being decided by a combined seven points. NAU lost to Sac State the last time they met in their building. They tip-off Saturday night at 7:05pm.

AZ product in NCAA Tournament: I am watching the morning slate of NCAA Tournament games on Friday morning and a local standout comes into the Georgia-Michigan State game off the bench. Former McClintock Charger Cameron Forte over the course of this season has become a key role player off the pine for Georgia. He went from little playing time at the start of the season to becoming one of the first players off the bench.

Forte, after being one of the top scorers and rebounders in the state in 2012, went onto Howard Junior College in 2013 where he averaged 22.5 points and 7.5 rebounds. He only spent one season there before heading to Georgia for three years of eligibility. Another example of a young man who out of high school whither playing basketball or football, may not have had the big offers but ultimately got the chance to play on a national stage after spending some time at the JUCO level to improve and take his game to another level.

Forte and the Bulldogs trailed by as much as 13 to Michigan State but that battled back to make it a 3 point game with just 20 seconds left  but it was not enough as the Spartans prevailed.

It's an honor to get the Gatorade POY award. I want to thank God and I couldn't have done it without the TRIBE!

He was remarkable to watch this season playing like a savvy, consistent veteran despite only being a sophomore. This award is very well deserved for Alex as he has become one of the state’ elite players but is also as humble as they come. While making plays on the court, he has also had tremendous success in the classroom sporting a 3.8 GPA. 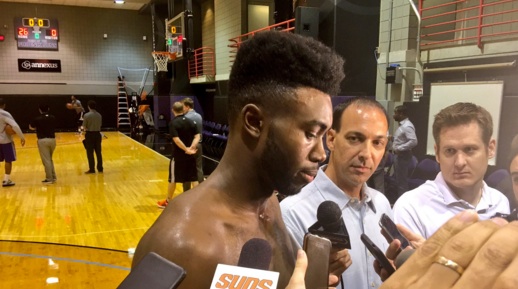