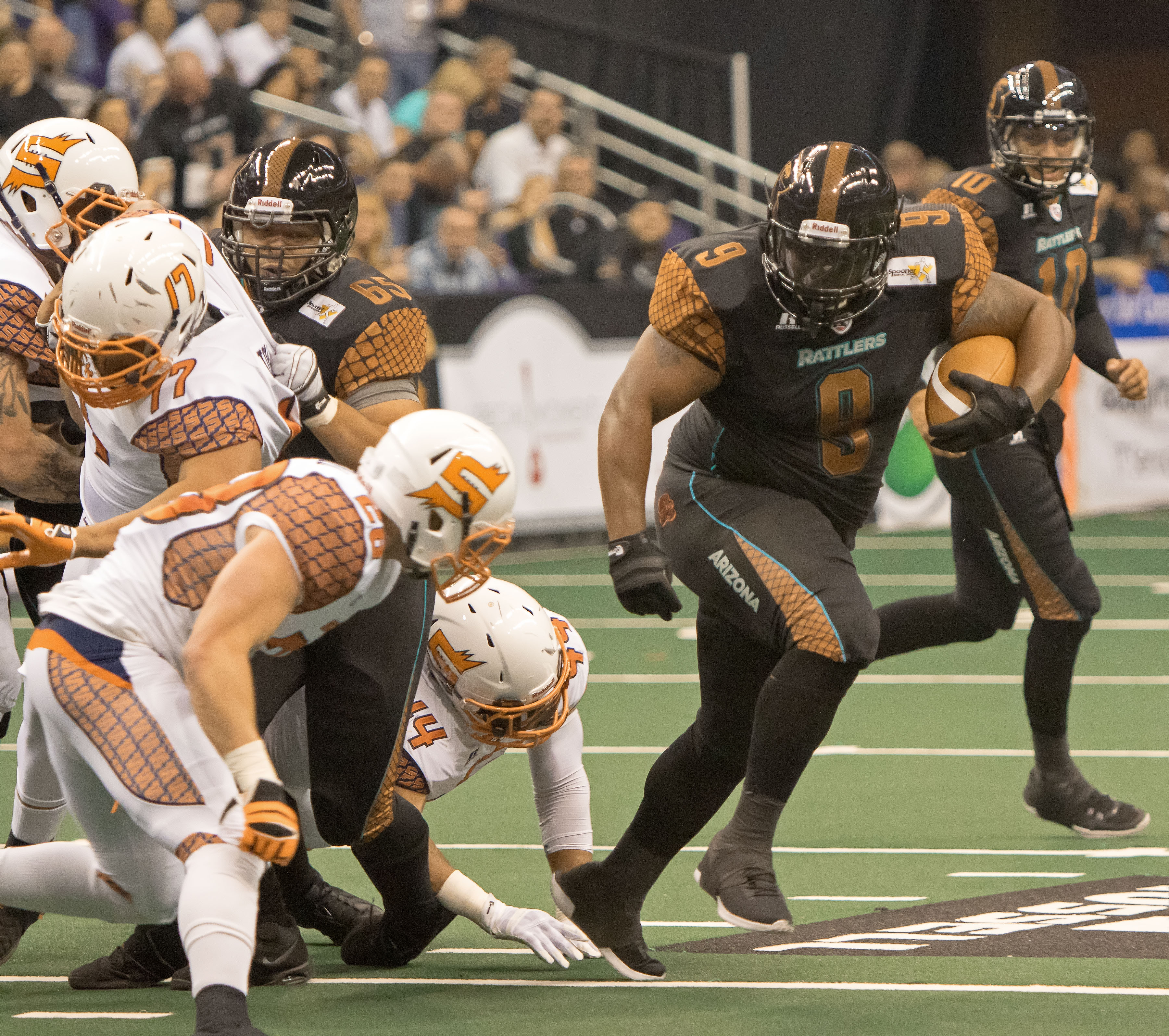 The three-time defending Arena Bowl Champion Arizona Rattlers kicked off their 2015 season in fashion with a 60-43 win over the Spokane Shock. Their newest banner was unveiled and the winning continued at US Airways Center under Head Coach and General Manager Kevin Guy.

Picking up where they left off: No Arena Bowl hangover for the Rattlers as they kicked off their 2015 season with a bang. Socring is what they continue to do best with Nick Davila, the reigning MVP at quarterback but it is what they team was able to do in the other two phases of the game that created the separation they needed to come away with the win. Arizona would force five turnovers in the game which included a fumble recovery, three interceptions and a fumble recovery returned for a score on special teams by Markee White. They are virtually unbeatable during their three peat when making plays like that on defense and special teams which is why they are going for a fourth consecutive title which has never been done in Arena League history.

Dynamic Davila: The reigning MVP picking right up where he left off. Quick strikes and an abundance of completions. Davila went 21 for 36 for 246 yards and four touchdowns.  There are a lot of new faces, especially on offense this season so it was up to their captain to keep every thing in tact and that’s what he did. Efficiency and no turnovers was what made him the MVP last season and that is what the team got from him in game one for 2015.

The New Bowling Ball in the backfield: The Rattlers showcased their third new full back in the last three seasons in the form of 6-0, 275 pound Mykel Benson. This dynasty began with Odie Armstrong until last season when they switched to rookie Alex Singleton. Now it is Benson in that role and Coach Kevin Guy might have their most athletic, elusive and powerful player in that spot that they have ever had. Not only was Benson making plays with his feet, he made one with his hands out of the backfield which is something we have not seen a lot of over the last couple of seasons. Benson had three rushing touchdowns in his Rattlers debut.

Getting to know new Wide Receivers: You looked up and down the Rattlers roster and there were a lot of familiar names missing. No Rod Windsor, no Maurice Purify and no Kerry Reed all due to injury and Tyson Poots is now with Las Vegas who the Rattlers play next week. Those were the top four receivers for Arizona last season. But that means opportunity for new players to step up and that is exactly what happened. Chase Deadder had nine catches for 73 yards and three scores, six foot seven inch Markee White added four catches for 57 yards and Jared Perry led the team in yards with 98 on six catches and had one touchdown. There was very few signs of unfamiliarity between Davila and the new receivers which is great to see in their first game.

Glasper having them in his Grasp: The importance of forcing turnovers with an offense as good as this has already been noted and one player who lead to the success of this for the Rattlers on Saturday was the play of Mike Linebacker Tyree Glasper. The North Carolina A&T standout had a huge sack on the final play of the first half and a big fumble recovery at the start of the second half which helped the Rattlers create the separation needed to come away with the win. He was everywhere, he was active and he is a crucial piece on defense for them.

Up next, the Rattlers head to Vegas to take on the Inaugural Outlaws for the first time to make it 2-0. Kick-off is at 7:30pm from Sin City on April fourth.