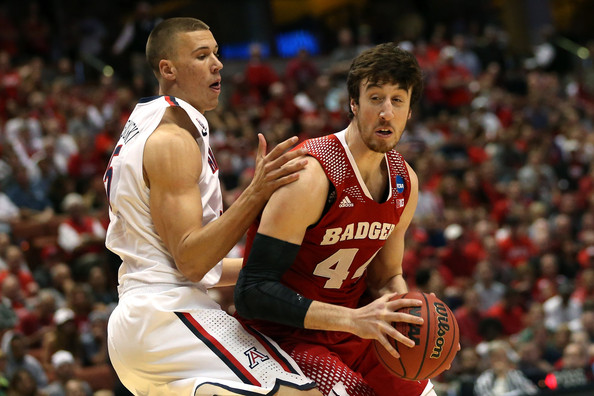 This was the way it was supposed to be.

At least it was when the the brackets were released nearly two weeks ago.

The two top seeds in the West Region:  Arizona vs. Wisconsin 2.0 with the winner punching their ticket to the Final Four in Indianapolis next weekend. Both teams win far more than they lose (each 34-3) and are stacked with players who will likely be playing beyond college.

“I think you’ve got six, maybe seven guys that will ultimately have a chance to play in the NBA,” CBS lead analyst Clark Kellogg told Sports360AZ.com’s Brad Cesmat in a phone interview Friday morning.

For UofA head coach Sean Miller it’s another opportunity to break through into the exclusive club of coaches who have made it to the final weekend. He’s hoping his third trip to the Elite Eight will be the charm. Still, despite all of his success, some of Wildcat Nation thinks Lute Olson’s heave shadow looms large over the 46-year old who guided the ‘Cats to a 147-36 record since taking over in 2009.

“I think he’s continuing to carve out his own identity,” Kellogg said. “It’s a massive shadow that Lute cast simply because of his tremendous success not just at Arizona but he was an outstanding head coach at Iowa, as well. That’s part of what happens when you follow a hall-of-famer. It’s a matter of Sean just continuing to be himself…[legendary football coach] Woody Hayes hasn’t been around Ohio State in a number of years and his name and shadow come up.”

So will UofA be able to get past the top-seed and reach that elusive Final Four for Miller?

“I think the versatility of Wisconsin is where the difference will be,” Kellogg explained to Cesmat. “The fact that the big guys can shoot it from outside. They’re solid defensively…I think Wisconsin finds a way to move on but I wouldn’t be surprised to see the Wildcats in Indianapolis either. But I think Wisconsin gets it done again.”