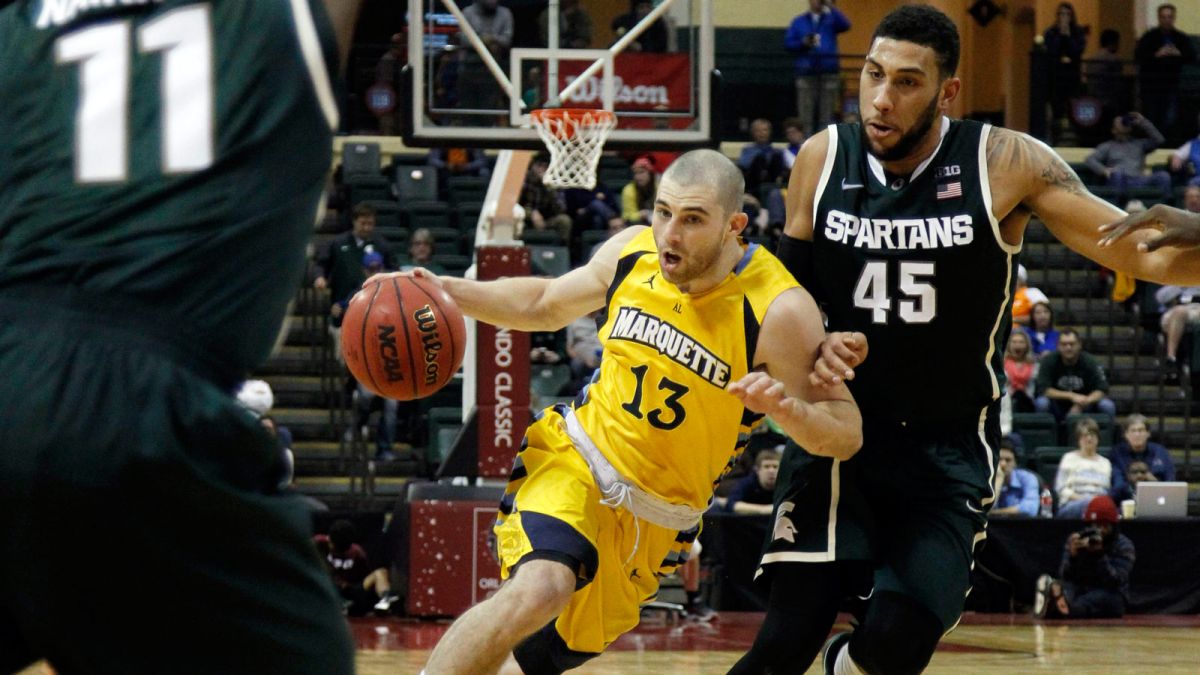 Most elite college basketball players take a conventional career route. High school ball in their hometown, then on to a big name school for four years before weighing their professional career options.

Matt Carlino did not take that conventional path.

“I’ve had a unique experience,” said Carlino. “Not every journey is the same.”

Carlino grew up in Arizona and was a star at Highland High School in Gilbert. While most freshmen have trouble even making their varsity teams, Carlino was a Second-Team All-State member in his debut season. He was one of the best players in the state during his sophomore season, leading Highland to the state championship game and winning Fiesta Region and East Valley Player of the Year honors.

“I loved growing up in Arizona,” said Carlino. “It’s hard to describe what’s so special about where you grew up. It’s home.”

Carlino would bid home farewell after his sophomore season, beginning a journey back and forth across the country that would take him through four different states. He first moved to Indiana with his dad, to play his junior year at Bloomington South high school, in order to be closer to Indiana University, where he was interested in attending.

“If you’ve seen the movie “Hoosiers,” you understand,” said Carlino. “They are serious about high school basketball in Indiana.”

After spending multiple summers taking classes while in high school, Carlino was presented with the opportunity to graduate early in 2010. He decided to take the chance, and passed on his senior season of high school ball, in order to begin the next chapter of his basketball career. That chapter’s first page would take place not at Indiana, but at UCLA.

“Being that far from family was hard when I was in Indiana,” said Carlino. “A big part of the decision to go to UCLA was about being closer to home.”

But things went wrong from the start in California. UCLA was in the middle of a tumultuous period when Carlino arrived on campus, one that would be documented two years later in Sports Illustrated as a time when then head coach Ben Howland and his staff reportedly lost control of the program to immature players. Five years later, Carlino has no desire to go into detail about his time at UCLA other than to say he wasn’t happy there.

“I’m not going to throw anyone under the bus,” said Carlino. “And there were some good people there. But it just wasn’t a good fit. I was young and I made the choice more on the name instead of what was the best basketball fit.”

After gutting through a summer and semester at UCLA, Carlino looked to head elsewhere for the second half of his freshman year. He decided to choose a home base that was in stark contrast to southern California.

“I wasn’t happy at UCLA,” said Carlino. “So I thought why not pick the total opposite of the place I was at. And I don’t think you can get more opposite from Los Angeles than Provo, Utah.”

BYU would be Carlino’s school for three seasons, from 2011-2014. He was named to multiple All-WCC teams and was a team captain during his junior season. The school provided an atmosphere that Carlino enjoyed and he still talks with his former teammates today.

“I was happy at BYU,” said Carlino. “I was very close with my teammates there and I liked the coaches. By the end of my junior year though, it was just time for us to go our separate ways from a basketball standpoint.”

Once again, Carlino headed into new and unchartered waters for his final college season. He landed at Marquette University, where he has played this year. The leadership provided by head coach Steve Wojciechowski has been one of Carlino’s favorite aspects of his new team.

“I’ve always loved basketball but “Woj” has brought out a real love for the game in me,” said Carlino. “He’s made me see that I could be a part of the game for the rest of my life.”

One might think he would be tired of moving. But these different places and teams, according to Carlino, have actually been a blessing for him.

“Some people may look at it as a negative,” said Carlino. “I think it’s the exact opposite. I feel my journey is a huge positive. I’ve been around so many great players and coaches and I’ve really gotten a chance to gather knowledge about the game from a wide range of people.”

His senior season has been an effective one averaging a team-high 14.6 points and 38 steals for the Golden Eagles. He’s also shooting close to 85% from the free throw line.

Marquette may be the final stop of Carlino’s college career, but he will be on the road again soon enough. Carlino wants to keep playing and although he’s not quite sure where that will be yet, he believes his unique journey to this point will be helpful as he navigates his basketball future.