A few years back I was having lunch at Montis in Tempe with a Pac-12 athletic director who gave me his view on hiring coaches. “You always have five names on a slip of paper in the top drawer of your desk for the football and basketball jobs, because you just never know how long you’re going to keep the one that you have”.

Arizona State Athletic Director Ray Anderson has never hired a coach for either sport. I have no idea if he is going to aim high, though I was very encouraged by his “rocket-ship” line when meeting with media earlier this week.
What I do know,to this point, none of the names that have been floated out there or that have expressed a “strong interest” in the job have done much to excite me. But, there’s a dynamic at play for this opening that Anderson is certainly considering.
“He has to find someone to take the pressure off of Todd Graham with this hire,” I was told earlier this week.
That may sound funny, but it makes perfect sense to me. Graham has sold Arizona State athletics(he was court side in North Carolina last night to support the ASU women’s basketball team). He has changed the “woe is me” mentality that has permeated ASU for far too long. In Tucson, Greg Byrne has Rich Rod and Sean Miller out in front. Hard  not to pay attention to those two. Anderson has to have a hire that can not only do the basketball side, but that can go out into the community like Graham has done and excite the masses. Salesmanship and recruiting go hand in hand, so I would be looking for someone who has that “it” factor when they walk into a room that ISN’T filled with people who just like basketball.

Here’s the second thought from this week. Is Arizona State basketball a better job than Alabama(open), Texas(appears about to open) or Tennessee(open). In my view none of those three should be considered a better job, even Texas. Ray Anderson’ NFL background(seek and destroy) convince me that he isn’t going to just settle for an assistant unless he sees the next Tom Izzo who  is ready for the big break. While I’ve been told that there’s no way Arizona State would pay more money to their basketball coach than football coach, I don’t know that to be FACT because Ray Anderson has never hired a coach in either sport.
Why not go big game hunting and pursue Shaka Smart at VCU? Is he waiting for the Texas job to come open as some have said ? In my view, if he’s good enough for Texas, then sell him on Tempe. Don’t give me the same tired argument that this program can never be a winner. I heard the same line when I was the play-by-play voice of San Diego State basketball twenty-plus years ago. Last time I checked Steve Fisher has turned them into a “rocket-ship” year after year. Shaka Smart would be a complete game changer.
Mark Gottfried was a terrific assistant at UCLA once upon a time and has done a great job at North Carolina State, I would reach out to him.
Michigan State assistant Dane Fife has been brought to my attention by those in the know. The Tom Izzo coaching tree certainly interests me. He already has head coaching experience.
Bobby Hurley at Buffalo would be a terrific “get” for ASU. I would have to wonder how long I would have him in campus. When Coach K retires at Duke, all the Blue Devils in the coaching community are going to be trying to get back to Durham.
An assistant at a major program(Jeff Capel) or established coach that is free(Steve Lavin), or may come available(Josh Pastner) are names that may be interested in Arizona State. Doesn’t mean that Arizona State should or is interested in THEM.
The timing isn’t right for Dan Majerle to leave Grand Canyon University. He hasn’t finished the job that he was brought in to start. I can’t see him considering leaving for at least three more years.

Who does Ray Anderson have on his list? Aim high, higher than what is currently floating around after four days… 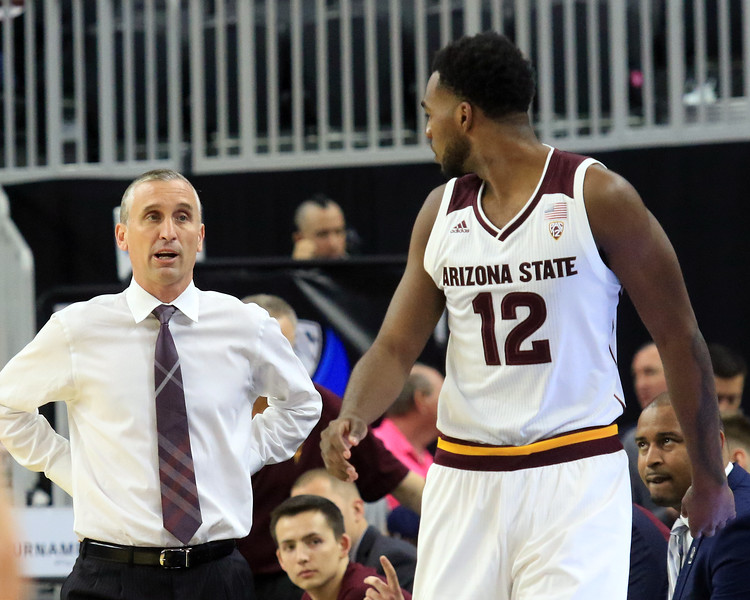 ASU, UofA still have NCAA tournament goals in the Palm of their hands