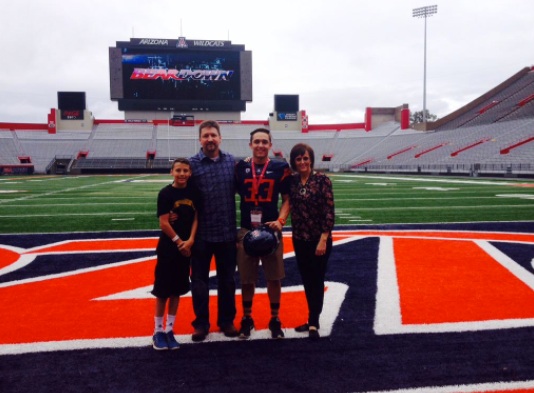 It wouldn’t figure that a running back who rushed for over 5,000 yards, scored 61 touchdowns, won the 100m State Championship, and was an All-Academic honoree during his high school career would have any shortage of college scholarship offers to choose from.

Surprisingly, such was the case for Queen Creek’s Weston Barlow, the state’s second leading rusher in 2014 despite missing almost two full games.

But a few weeks ago he received a different kind of offer after he accepted an invite to visit the University of Arizona to tour the facilities, and learn about the school and its football program.

“They showed interest and I definitely showed interest back,” Barlow said. “Just being down there, looking at the campus, talking to the coaches, and learning more about it – I fell in love with (the school).”

He faced a decision after returning from Tucson.

Would he choose to accept a scholarship from Air Force or any of the Division II schools that offered him?

Or would choose to play in a Power Five conference as an invited walk-on at Arizona?

“I feel like (University Arizona) is where I’d fit in the best and my best option,” he told Sports360AZ.com the day before he signed with the school.

Besides believing in his own ability, Barlow must have been influenced by his soon-to-be head coach Rich Rodriguez’ commitment to building a certain type of walk-on program. The Wildcats’ head coach briefly addressed the subject during his Signing Day Press Conference.

“I can’t announce it today but whenever it happens – in two or three weeks – I think we will have collected the greatest, best group of invited walk-ons in the entire country,” said Rodriguez, a former walk-on himself at West Virginia University in 1981. “It’s a passion of mine and a passion of the staff.”

Rodriguez said he couldn’t reveal the names of the players who were invited to walk-on until they’re accepted by the school and “put down a deposit.”

“When (the players) talk to us we explain our vision for the walk-on program,” Rodriguez said.

“We will have a dozen or so – maybe – when it’s all said and done,” he continued. “I wouldn’t be shocked if, of that dozen invited walk-ons, there isn’t three or four that’ll wind up getting playing time within the next two years and four or five wind up getting scholarships.”

The University of Arizona was perhaps the “best option” for Barlow, who said he will enroll in summer classes that begin in June and immediately get started in the Wildcats’ weight training program.

“It’s, by far, a dream come true,” he said. “As a little kid I always wanted to play Division I football.”

And now Barlow is ready to Bear Down.