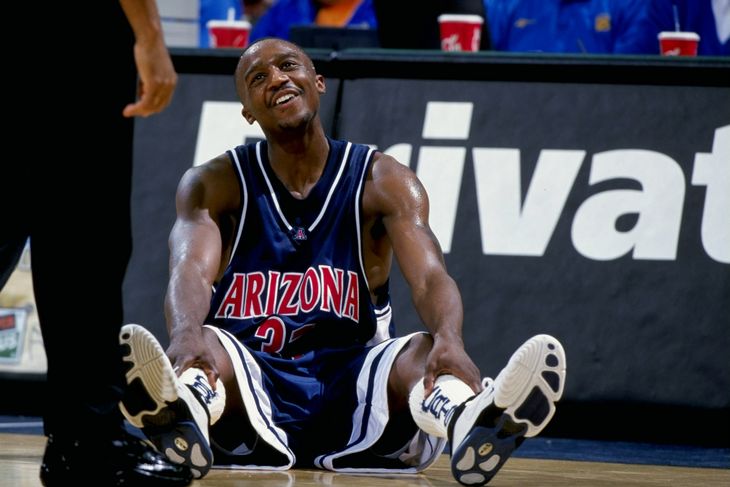 The number 31 is currently worn by Senior from Tucson Matt Korcheck. He will be the last men’s basketball player to ever wear that number after this season.

The reason? On Thursday night, the Wildcats will retire the number 31 to honor one of the all-time greats to suit up for the program, Jason Terry.

The man that brought him to Tucson, Arizona from Seattle, Washington, Lute Olson will be among the most proud and excited to see the number 31 being displayed in the rafters. The Legendary Wildcats Head Coach reflected on some of his favorite Jason Terry stories leading up to the big night.

Of course, the first has to involve the 1997 National Championship. During that Season, eventual Tournament Hero Miles Simon was ineligible based on a decision made by the Arizona Board of Regents. Not the NCAA.

“Miles had to sit out the first semester and when he came back I had him come off the bench but a couple games and Jason Terry came to see me and said ‘Coach, we’ve got to get Miles back in the starting lineup,'” Olson recalled on the Brad Cesmat Show.  “So I said ‘Yeah, but we can’t take Mike Bibby out. He’s a freshman and we can’t destroy his confidence.’ Michael Dickerson had a personality as such that if we put him on the bench, that would have created problems with his confidence.”

Most heralded players out there would not relinquish there spot in the starting lineup. But that’s what made Terry different. Olson asked him who he should put on the bench to add Simon.

“He said ‘Coach, put me on the bench. I’ll be the sixth man,'” Olson said. “I think he knew he was going to be in the game for the last ten minutes anyway. He wouldn’t start the game but he would finish the game all the time.”

Terry has maintained Wildcat pride long after his departure from the University to the NBA. Just this past spring, Terry finished school and earned his degree from the school. This reminded Olson another one of his favorite Jason Terry stories.

“We went to his graduation ceremony this last May and then we had dinner with he and all his family,” stated Olson. “We were just talking and then all of a sudden he said ‘Coach, check this out!’ He had his gown on and his dress shows and he had his long ‘Cats’ socks on. He wouldn’t play without those on.”

As a matter of fact, many in attendance plan on wearing those classic ‘Cats’ socks for the game Thursday night against USC.

There have been some incredible basketball players that have come and gone from the Arizona program. Some of which would go on to represent the school at the next level as one of the elite basketball players in the world. In the eyes of Olson, Terry stands out amongst the rest.

“There were great young men who played during the time that I was here, none better I think than Jason Terry,” mentioned Olson. “He’s gone on to the NBA and represented the U of A so well that I am just thrilled for his jersey to be retired.”

In a Wildcat uniform, Terry was an All-Conference performer and a first team all-american and of course a member of the 1997 National Championship team which beat three number one seeds. A feat that could be matched, but never exceeded. In the NBA, he won a Championship and a sixth man of the year award with the Dallas Mavericks. Further proving that you do not need to be the starter to make a big impact on a team as he did in one of Coach Olson’s favorite stories.

The number 31 will permanently be displayed in the rafters at McKale Center starting at halftime of Thursday nights game.