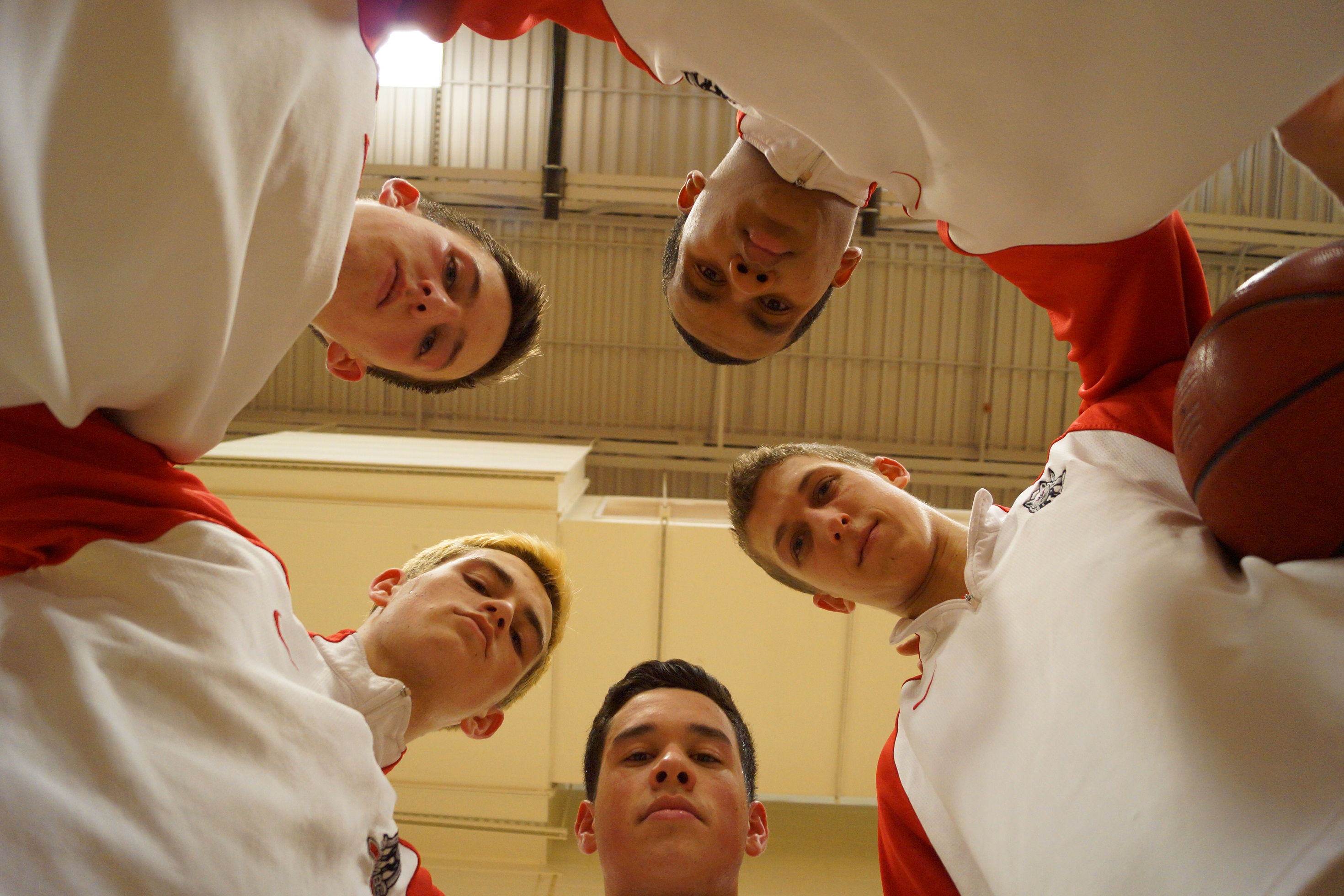 Ask Combs’ basketball head coach Kirk Fauske about his team’s success over the past four years and he is quick to remind anyone of the Coyotes’ record at the end of the 2010-11 season, his first at the school.

What spurred the turnaround?

Enter the Fauske Five – Carter Aby, Garron Brown, Nate Duhaney, Drew Johnson, and Adam Rodriguez – a group of lifelong friends who vowed to attend the same high school while still in elementary school with the goal of winning a state championship.

“We’re a family – that’s the bottom line,” Player of the Year candidate Carter Aby said prior to the season. “We’re all brothers who have been together since elementary school. We’ve all grown up together, we trust one another other, and we know what each other is capable of.”

In their final season together, the Fauske Five are two games away from making their dream a reality, something they’ve talked about openly.

“This is what we’ve been dreaming about our whole high school career – since freshman year,” Aby told Sports360AZ.com in November.

Added Nate Duhaney, “In (10 or 20) years, it’ll be cool to come back and see the culture here still going. It’s going to be a fun journey.”

If you ask Fauske about this group of players, what they mean to him personally and to the development of the Coyotes program, you won’t have to look any further than the long sleeve under his patent sweater vest to see how he feels.

“They believed in me,” he answered softly when asked how this group helped build his program. “They did what I told them to do and they did it without asking.”

“It’s going to be tough to let them go.”

It’s one thing to ask but another to receive. The Fauske Five delivered and immediately changed the course of the Combs’ basketball program.

“When they decided they were going to put the work in, that’s when I knew I had something special,” Fauske said.

The Yotes reached the quarterfinals of last year’s state tournament only to lose in the closing seconds to Yuma Catholic. With nine returning seniors, including the Fauske Five, they had all the makings of a team that could make a run at the state title this season.

But when preseason rankings came out, the Yotes were nowhere to be found. Despite the snub, they remained confident, knowing they had what almost every coach dreams of.

“We have five varsity captains, five seniors who are going to lead the team,” Aby said before the season. “We are going to take day by day and push each other every day.”

Combs started the season 2 – 4, playing against teams in higher divisions. Their last loss, against Queen Creek, came on Dec. 8. They’ve won 26 in-a-row since, including a second-straight sectional title.

“It’s a good accomplishment and a great feeling,” Aby said at the time about winning the Section VI Championship. “But we all want the bigger picture. We want the state championship and we’re going to do whatever it takes to get that.”

Every good story always includes some drama and the Yotes had their share this year. They won the Copper Cities Tournament on a buzzer three-pointer by Johnson in what could only be described as a self-fulfilling prophecy.

“It’s fun seeing your brothers – your best friends – doing what they love.”

If you’ve been around this team, you know they’ve enjoyed every minute of the journey. It’s something they said they would do before the season started and have kept true since.

“It’s been awesome,” Garron Brown said. “These guys are my brothers and my best friends.”

“I can look back on this in 10 years, know that I played with my best friends, and we made an impact on this school and this basketball program. It’s something I’ll never forget.”

“It’s great playing with them,” added Adam Rodriguez. “I wouldn’t be here today if it wasn’t for any of these guys.”

“It’s been great being with them, making history with them, and growing up them,” he continued. “I can’t wait. I don’t want it to end.”

It hasn’t ended yet for the No. 4-seed Coyotes. They’ll face No. 16-seed Thatcher in tonight’s second Division III semi-final game at Gila River Arena with a spot in the championship game at stake.

No matter what happens the rest of the way, it’s been an unbelievable ride and certainly something this group will cherish forever. But if it’s all the same, they’d just assume go out in style.

“It’s been unbelievable to change things here at Combs,” said Johnson, the Coyotes’ coach on the floor. “We’re not done. We have such high expectations and dreams. We’re going to go get them and change this school even more.”

Fauske sounds as if he is aware he’s had a once-in-a-lifetime experience coaching this team.

“When this journey comes to an end – win or lose – it’s going to be sad only because I won’t ever get the opportunity to coach these five kids again.”

But if you don’t believe what you hear from the Coyotes’ head coach, just check his sleeve.