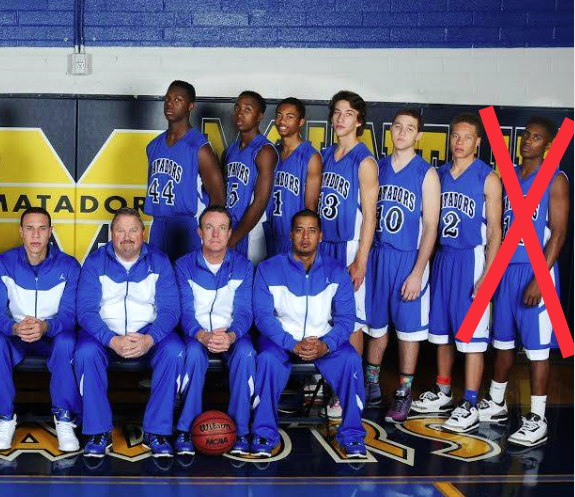 On January 12th in front of a packed gym in Tempe, Shadow Mountain boys basketball, the defending champions of division 2, was giving division 1 defending champion Corona del Sol all they could handle. At the end of the Matadors bench sat Bryce Fisher, a junior point guard who transferred to Shadow Mountain from Perry High in Gilbert. Five rows behind Shadow Mountain coach Mike Bibby sat Fisher’s father, Wilbur. Both father and son celebrated each Shadow Mountain basket with as much enthusiasm as anyone else in the building that night. When Craig Randall, a transfer from Medina, Ohio, unleashed a fourth quarter barrage of eight straight points to bring Shadow Mountain within two, both Fisher men rose to their feet simultaneously, Bryce confidently nodding his head, and Wilbur howling “We’ve got this!”

To the uninformed spectator, the Fishers looked as much a part of the Shadow Mountain team as anyone else wearing blue and white that night. An excited dad, and a supportive son simply waiting for coach Bibby to call his name. Those following the saga of Bryce Fisher, however, know there’s more to the story than meets the eye. Surely a player whose last action on a high school court was playing lockdown defense against Casey Benson and this same Corona team in the 2014 division 1 semifinals could find some minutes on this Shadow Mountain squad. No, Fisher wasn’t just a point guard at the end of Bibby’s bench who fell victim to a steep depth chart. The fact that he walked off the court after his team’s 80-74 loss without seeing a single minute of action, as he does after every game, had nothing to do with his skill level, grades, or even practice habits. The real reason for Fisher’s lack of court time is that he’s been declared athletically ineligible for 2014-15 for violating the Arizona Interscholastic Association’s “Prior Contact” rule.

The “Prior Contact” rule, more formally known as AIA bylaw 15.12.4.14, exists to stem recruiting by school-affiliated officials during non-school affiliated activities, such as club basketball. More and more, coaches at the high school level are either directly or indirectly involved in the club basketball scene, and because of this, they come into contact with players enrolled at other schools on a regular basis. The rule exists to take the temptation and incentive to recruit players away from both the players and coaches, because if a student does transfer to a school where they’ve had prior contact with coaches, assistants or administrators, they sacrifice a year of eligibility. The rule states that if a transfer does occur, a calendar year needs to have passed since the last non-school affiliated athletic contact occurred in order for the athlete to maintain their eligibility.

For Bryce Fisher, it was thought that nearly two years had passed since he had an affiliation with Team Bibby (Shadow Mountain coach Mike Bibby’s club basketball program). It wasn’t until after Fisher transferred that someone produced a photo showing that the last time Fisher played in a tournament that Bibby coached in was just over 49 weeks before the start of Shadow Mountain’s 2014-2015 school-year. Fisher had played in a club-affiliated Labor Day 2013 basketball tournament, and because he did that, he’d have to give up basketball his junior year in order to stay at Shadow Mountain.

Gregg Rosenberg, a scout and talent evaluator who supplies rankings to ArizonaVarsity.com, and takes in more basketball than anyone in the state, sees Fisher as a unique talent at the point guard position.  “(Fisher) is a super quick defensive-minded lead guard with a nice set 3 point shot, and quick hands and feet to defend the opposing guards.” Rosenberg added, “He is arguably the best defensive point guard in the class.”

So why would the best defensive point guard in the class of 2016 sacrifice his entire junior year of high school basketball just to play at Shadow Mountain? Why couldn’t he have stayed at Perry High, teaming his defensive skillset with the best offensive player in the state in sophomore guard Markus Howard?

“Because it wasn’t his choice.” Said Wilbur Fisher, Bryce’s father.  “We were doing what was best for our family, and now Bryce is being punished for it.”

Bryce’s older brother Brandon received a partial scholarship to play football for Arizona Christian in their inaugural season as an NAIA program. As a freshman on partial scholarship, Brandon Fisher is required to either live on campus, or maintain his residence with his parents. Tuition alone at ACU costs $22,500 per year, and room and board would add another $9600 to that total. Wilbur had lost his job in April of 2014, and his wife was on leave due to a knee replacement surgery, making the cost of Brandon living on campus prohibitive. Rather than Brandon driving 47 miles to school one way 1-2 times daily for classes and practice, the Fishers decided to relocate to live near Arizona Christian. “I could have asked my kids to sacrifice something for their parents, or we could all make sacrifices together so they could continue building toward their future.” Said Wilbur. “Plus, it just made the most financial sense.”

Arizona Christian is located under two miles from Shadow Mountain High School, and ACU’s football team even plays their home games on Shadow Mountain’s football field. Bryce knew some of the Shadow Mountain kids from his time playing club basketball with Team Bibby, so according to Wilbur, Bryce’s enrollment at Shadow Mountain just made sense. Wilbur claims that as far as he knew, the proper forms had been filed and the transfer was complete pending the need to apply for a hardship, that considering Wilbur’s unemployment, his wife’s surgery, and Brandon’s situation at ACU would have certainly been granted. That’s when the photo showed up.

Wilbur Fisher claims he doesn’t know how the photo showed up at AIA offices, or who sent it, though he suspects Perry coach Joe Babinski may have had something to do with it. After Fisher was declared ineligible, Babinski had been quoted by Richard Obert of AZCentral.com as saying Shadow Mountain was the one school that he did not approve of Fisher transferring to due to the existing letter of the law.

Due to the “Prior Contact” rule violation, Fisher was not allowed to appeal for hardship, and that’s where Wilbur Fisher feels the rule itself is flawed. “Things change during course of a year, and in this case we’re talking about two weeks. How do they define a year anyway? Basketball season doesn’t start until winter, which is well over a year past the point of prior contact.”

Wilbur Fisher claims that at one of the hearings, Chuck Schmidt, who was recently named Harold Slemmer’s successor as director of the AIA, told him that had he just held Bryce out of Shadow Mountain until after Labor Day 2014, there would have been no issue. When contacted about verifying that the conversation about holding Bryce out of school took place, Schmidt emailed, “As a policy, we do not comment on specific students or investigations.” When asked a follow-up question about whether a student could hypothetically be held out of school to clear the 365 day prior contact period, Chuck Schmidt emailed back “The prior contact rule states – and I am paraphrasing – that a student who plays for someone on an outside/club team, within the past twelve months, and transfers to the school where that coach is employed, will be ineligible for one year.”

One may be able to interpret from that response that you could in fact, hold a student out of class until the 12-month period lapses, thus making them eligible to play. “I could have done that,” Wilbur said. “I also could have lied about the nature of the photo that was produced, but I’m trying to teach my kids to do the right thing.”

Adding insult to injury during Bryce Fisher’s lost season is that two other Arizona juniors who had also been declared ineligible for the 2014-15 season under the “Prior Contact” rule have managed to find their way back onto the basketball court. Mitchell Lightfoot and Tony Licavoli were both declared ineligible for having prior contact with coach Kurt Keener preceding their transfer to Gilbert Christian. Lightfoot and Licavoli’s parents eventually retained counsel, and filed for an injunction to allow the boys to play, which Superior Court Justice Lori Bustamante granted. In her decision, she wrote that the enforcement of the “Prior Contact” rule on Lightfoot and Licavoli was “arbitrary” as well as “capricious” and the two juniors would “suffer irreparable harm if they are not part of the basketball team.”

In response to the court’s decision, the Fishers placed a call to the AIA offices but were told that despite the ruling, in Bryce’s case there would be no leniency or reversal, as they technically never reversed their decisions in the case of Lightfoot and Licavoli, retaining counsel of their own to defend the “straightforward” nature of the rule. “At that point the only the only strategy for us was to come up with $10,000 to give to a lawyer and file an injunction of our own, and I don’t have the money,” said Wilbur. “Even more, Mitch Lightfoot has already agreed to play for the University of New Mexico. If a judge feels that the AIA’s enforcement of this rule is causing ‘irreparable harm’ to a kid with a scholarship, what’s it doing to Bryce?”

Despite being on the record as opposing Fisher’s transfer from Perry to Shadow Mountain, Perry coach Joe Babinski agreed with Wilbur on the sentiment that if Lightfoot and Licavoli are able to play, Bryce should be able to as well. “Hell, let Bryce play. That’s not right to let two kids go and not the other one who falls under the same rule.” Babinski said. “I like Bryce, he’s a great kid, but if the rule’s in place, you’ve gotta follow it. If a court says the rule shouldn’t be in place any more, let him go.”

Lighfoot and Licavoli are averaging a combined 25 points and 14 rebounds in 19 total games for Gilbert Christian, a team that is trying to upend Shadow Mountain for the 2015 division 2 championship. If the two teams end up meeting in the playoffs, you can expect Wilbur to be in the crowd, and Bryce on the bench, supporting the Matadors despite the frustrating and ironic scene. “The crime just doesn’t fit this punishment, and we could have done certain things after the fact to avoid this penalty,” said Wilbur. “But I need to teach Bryce that you don’t lie, and you do things the right way, regardless of what happens. I need to instill those values, and I believe we’re paying the price for that.”

@mikal_bridges talking what it means for him to be in Phoenix after the @Dbacks held a Mikal Bridges Appreciation Day this summer and he spent some time in Tempe closing down Vine Tavern. @Sports360AZ https://t.co/TYwITuQiFC
View on Twitter
3
7