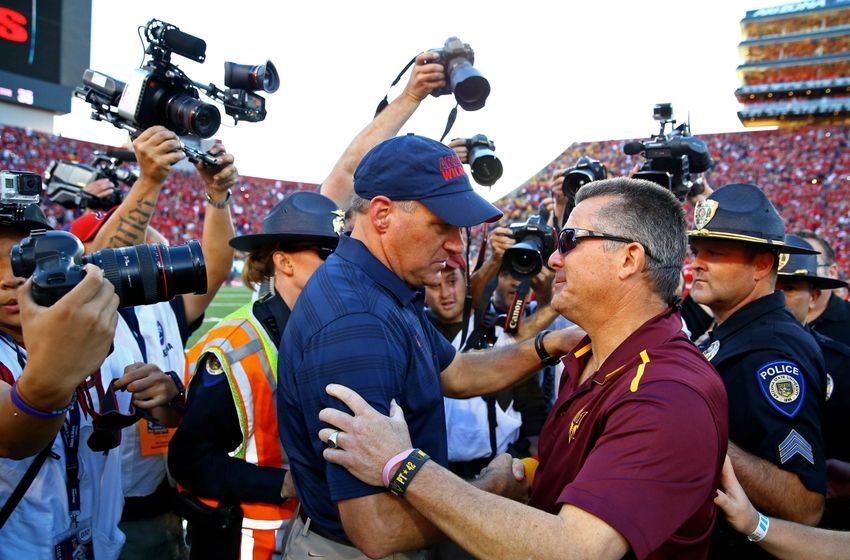 The texts are sending.

It’s crunch time for college football coaches around the country.

The recent success of Todd Graham at Arizona State and Rich Rodriguez at the University of Arizona on the field is starting to pay dividends on the recruiting trail and each are hard at work trying to add crown jewels to the collection with just over two until National Letter of Intent Day.

In Tempe, Graham is attempting to build on back-to-back double-digit win seasons and finding success in the ever-changing world of recruiting.

“Right now ASU is really having a great class,” FOX/Scout National Recruiting Analyst Greg Biggins told Sports360AZ.com’s Brad Cesmat in a recent phone interview. “I think they’re number three in the Pac-12 and they’re in the top 20 [18th] nationally. They really do a nice job.”

Graham made big promises when he arrived three years ago: one of those was competing for the biggest names in the recruiting wars.

To this point, he’s certainly delivered.

“ASU is big game hunting,” Biggins explained. “They’re going after the top, top guys competing with USC, UCLA for the best guys on the west coast.”

One of those top guys is quarterback Brady White who committed back in May. The 6’2 pro-style quarterback has over 16 offers, including one from perennial power Oregon.

“Real smooth, polished,” Biggins said. “He’s about as mechanically solid as you can possibly be. Great feel, pocket presence. He’s not real big, physically. You’d like to see him fill out a little bit more…he could compete for the backup job right away.”

Meanwhile down in Tucson Rodriguez takes a specific, streamlined approach to finding players so don’t be misled by their slightly lower national ranking (32nd according to Scout).

“I think Rich Rod does a great job of developing guys that may not be the most well-known,” Biggins explained. “He gets guys that fit their system.”

He says the Wildcats would like to sign another quarterback in the next couple weeks after former Chaparral star Connor Brewer announced he was transferring last week.

Biggins knows both head Graham and Rodriguez trust in their recruiting philosophies and the past has proved it as each have won Pac-12 South Championships in their first seasons with some players who they didn’t recruit.

If the pieces continue to fit the annual Territorial Cup likely will have the same high stakes impact it did in November.

Cesmat-What Does the Future Hold for Graham and Rich Rod?