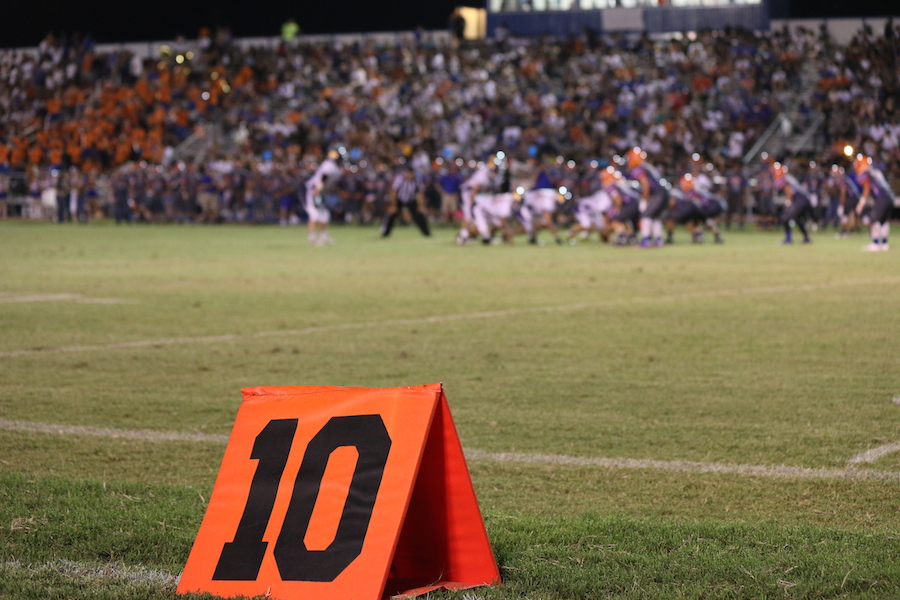 Sorry, had to take a breath there after an insane 2014 season. With the state championships in our rearview mirror, I wanted to leave some parting thoughts, and a few things to look out for in 2015.

Chandler Is REALLY Good (And Will Be For A While)

Top-to-bottom, the Chandler Wolves were the best team I saw this year. They were dominant in every aspect of the game. The scariest part? They will be like this for a while. Yes, they will lose QB Bryce Perkins, WR Justin Jan, and some key members along the defense, but stars Micah Reed-Campos and Chase Lucas return to the backfield, N’Keal Harry, who was a great compliment to Jan this year, will be the #1 receiver, Kolby Taylor, who was the epitome of lightning in a bottle in 2014, will return as a junior next year.  Defensively, they return stars like K.T. Tilini, Isiah Swann, and Kyree Woods.

Mason Moran is the heir-apparent for the quarterback position in 2015. He looked good when Chandler had pulled away enough to bring in the second team offense, but he isn’t a stranger to the field. He was a playmaker at the safety position for the Wolves in 2014.

Chaparral Firebirds Will Rise From The Ashes

Chaparral had a season full of ups and downs. The roster was riddled with injuries, including senior quarterback Sean Paul Brophy, and a lot of players were at the varsity level for the first time. Sophomore quarterback Grayson Barry was able to come in and win two playoff games for the tenth-seeded Firebirds before getting knocked out by eventual state champion Centennial.  Chaparral returns Barry and Gianni Tomasi, a sophomore receiver who led the team with 10 receiving touchdowns, Brandon Jamison, who had 17 tackles for loss, and many other players who had expanded roles as sophomores and juniors in their 2014 season. Expect this youth movement to help propel the Firebirds back to a perennial power.

I saw some incredible sophomore stars step up in 2014. Sure, these guys may not be able to drive, but they will be staples of Arizona high school football for the next few years:

Kolby Taylor: Mentioned above, he can do a lot if he gets a little space. The Wolves utilized him frequently on sweep plays while in the slot receiver position. Taylor has some good football bloodlines. His older brothers, Kerry, who was a star at ASU and Kendyl, who is currently at Washington.  I would expect Kolby to get similar attention from schools that his brothers received when in high school.

Tyler Johnson: If we are talking about pure athleticism, I’m not sure if there was anyone I saw this year more impressive than Johnson. At 6’4″, 240 lbs, this Highland Hawk has a mix of size and speed that is unmatched. Coach Wahlheim utilized both attributes, playing Johnson at wide receiver and defensive end. If he gets thrown a jump ball, odds are he will catch it and take it to the house. He had 20 receptions on the year, but 8 touchdowns. He told me earlier in the year he prefers playing defense, where he forced three fumbles this year.

Naz Greer: Greer had big shoes to fill replacing Josh Eckley at Marcos de Niza. Greer delivered. He threw for 3,103 yards and 39 touchdowns. Much like his predecessor Eckley, Greer will have many years to stake his claim as a Padres playmaker.

Ryan Kelley:  Basha’s Kelley threw for 30 touchdowns and tacked on four more rushing touchdowns in 2014.  Like Greer, Kelley was taking over for a decorated quarterback in Zach Werlinger.  Kelley loses his top two targets in 2014, but Hunter Dean-Gibson, who Kelley hooked up with for seven touchdowns in 2014, returns as Kelley looks to build upon his impressive sophomore season.

Brandon Long: The Best Player You Might Not Have Heard Of

To say Brandon Long was a workhorse in 2014 is a vast, vast understatement. He rushed for the third-highest amount of yards in the state and the only person who scored more points than Long in the state of Arizona was Christian Kirk.  He was also a prominent player in River Valley’s Division IV state title run.  In his career at River Valley, he rushed for 6,750 yards and 93 rushing touchdowns. He stands at 5’7”, but was one of the more difficult players to bring down in 2014. Long ends his career a state champion, but hasn’t received any offers to play at the next level. With the resume and skill-set he has, I don’t anticipate that staying that way.

Brophy’s Isaiah Oliver Can Do It All

I have a tough time finding a player who did more than Isaiah Oliver did for Brophy. There are few guys in the state that coaches had to gameplan against on offense, defense, and special teams (both as a return man and someone who can block a kick). The senior Bronco had 12 receiving touchdowns, seven interceptions and five blocked field goals on the year. He was also a threat as a punt and kick returner to take one back. Oliver was a huge factor in Brophy’s turnaround after starting the year 1-3 to eventually make it to the state semi-finals. Oliver just nabbed an offer from Colorado and I’m sure more will start flowing in after his incredible senior year.

Warriors Came Out And Played

When you think of Westwood football the past few years, success isn’t a word that would typically come up…until 2014.  The Warriors won nine games, one more game than the prior three years combined.  Head coach Spencer Stowers has done a great job with the team, who were a seven-seed in Division II playoffs.  The Warriors were knocked out by Chaparral in the first round, but the Warriors are looking to make the playoffs a landing spot from year to year.  They return running back Ethan Johnson, who rushed for nearly 1,900 yards and 25 touchdowns.

So there it is.  2014 high school football season in the books.  To say I loved covering it would be a quite the understatement.  Before we know it, Signing Day will be upon us and we will be gearing up for 2015.

And I can’t freaking wait.

Spring Ball Notebook: What To Watch For In 2015