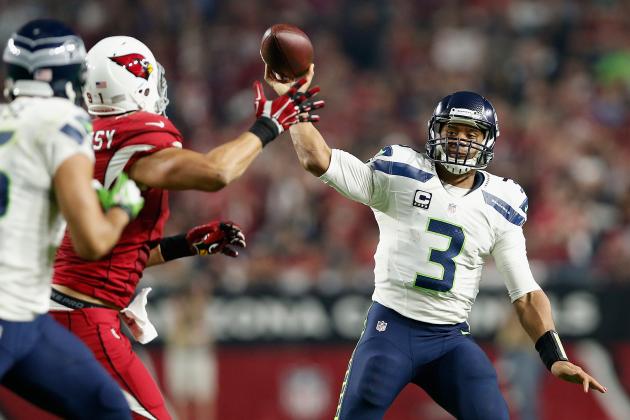 It was going to be a tall task for the Arizona Cardinals to achieve whether it was Ryan Lindley, Drew Stanton, Carson Palmer or Kurt Warner. The Seattle Seahawks are the defending champions for a reason and they reaffirmed why that is the case on Sunday Night Football in a 35-6 win over the Cardinals. Here are five things we learned.

Need Touchdowns: Before the start of the 2014 season it would be pretty obvious to state that you need to score touchdowns to win football games. Well after what we saw in the Cardinals win over the Rams on the road last week, field goals could do the trick as well. That however was not the case this time. The Cardinals have now failed to score a touchdown in tow consecutive games and have score just one in their last three. That’s with Ryan Lindley and Drew Stanton at the helm. It was a struggle for Lindley on Sunday as he was 18-44 for 216 yards and an interception. He was missing receivers on routes by not going through his progressions and was settling for low percentage plays. His receivers didn’t help much either as there were quite a few drops at the same time.

“I’m trying to put this one to bed as soon as possible,” said Cardinals receiver Larry Fitzgerald. “I just want to erase it from my memory. We’re a playoff team. We’re going to be in the tournament. But we have to get this taste out of our mouths and we have to get back to work tomorrow and address the things we didn’t do well.”

Defense Dominated: The Cardinals defense had been so good for most of the season but against Seattle, this looked like a completely different unit. The offense did not do them any favors as they were on the field far too much in this game and it wore on them. But at the same time, there were far too many explosive plays. They allowed 596 yards of total offense which is the most in franchise history and after the game, Patrick Peterson said he “almost passed out,” when he heard that number. Four plays went for 49 yards or more which included an 80 yard touchdown catch for Luke Willson which gave the Seahawks their first lead and then demoralizing 79 yard Marshawn Lynch touchdown run which put the game well out of reach.

“At the end of the day, we are a football team; we are a team together,” said corner back Patrick Peterson. “We didn’t play well in either phase. Like Coach said, we didn’t play hard enough or make enough plays to put us in position to win the ball game. We have to get back to the drawing board. We know what it takes to win.”

Russell Athletic: Here is breaking news, Russell Wilson is really good. He truly is a game changer. The Cardinals defense had to prevent a crooked number from being put on them and Wilson was the one that time and time again just sucked the air right out of the building. 81 yards rushing, 339 yards passing, three total touchdowns. Seattle was without two of their starting lineman and the seven sacks the Cardinals had on Wilson in Seattle was supposed to multiply because of it. But the Cardinals managed just one sack which did not come until the fourth quarter because of the elusiveness of Wilson to extend plays and his quick thinking.

“It’s really frustrating,” said Cardinals safety Tony Jefferson. “He scrambles around and keeps plays alive. That can’t happen. That hurt us. We knew coming into the game, we couldn’t let him keep plays alive with his feet. We let it happen too much.”

Questionable timing: I have not questioned Bruce Arians’ decision making nearly as much as I have in the past with former coaches but there was one play, one single decision that I did not understand when it happened and I feel it was a momentum shifter in the game. The Cardinals came out running the football on early downs putting themselves in much more manageable third and fourth downs. Were they dominating,no, but just coming off of a scoring drive where they were first and goal and finishing with three points, then the Seahawks responding with a quick 80 yard touchdown to take their first lead, Arians decided to send Logan Thomas out onto the field on first and ten from inside their own ten after a horrible Ted Ginn return. They wanted to dial up a deep ball from Logan to John Brown but it did not work as Thomas was hit as he threw it and fell incomplete. Then Lindley runs out on second down and he throws the ball and all of a sudden you are looking at third and long deep in your own zone. I felt it totally took the offense out of a rhythm and there was no reason to do that. It did not cost the Cardinals the game and it probably would not of made a difference. But was very unnecessary.

What now?: For the first time all season, the Cardinals do not control their own destiny. They need a win next week over San Francisco and for Seattle to lose at home to St. Louis to get the division and the number one seed back. As we sit here prior to week 17, the Seahawks own the top spot in the NFC West, the number one overall seed and the Cardinals stand at the five seed. But this is where it gets weird, the Cardinals are currently the number six seed in the playoffs because the Lions are currently the NFC North Leader and the Packers are ahead of the Cardinals because of common opponent record. Both teams have played the Seahawks, Lions, Eagles and Falcons. The Packers are 2-2 against those teams and the Cardinals are 2-3. If the Cardinals end up the wildcard team, you are rooting for the Packers to beat the Lions next week so that the Cardinals get the five seed as they own the head-to-head advantage with Detroit. If the Cardinals win the division with a win and a Seahawks loss, you want the Lions to win so that the Cardinals get that number one overall seed. Have I made your head spin yet. A lot will be decided all over the NFC next week but one thing is for certain, the Cards are in the playoffs no matter what which they made happen in their win last week over the Rams.

“We’ll correct what we did wrong here and forget about it when we leave the building,” said quarterback Ryan Lindley. “We’ll come in on Wednesday ready to go.”

“We still play next week and we’ll find out if we will be division champions,” mentioned head coach Bruce Arians. “If not, we’ll be the wildcard team and travel east. It’s not the end of the world for us. Obviously we would have like to have the easy way, but there are a lot of teams who’ve gone on the road and done what we want to do. Our goal hasn’t changed.”