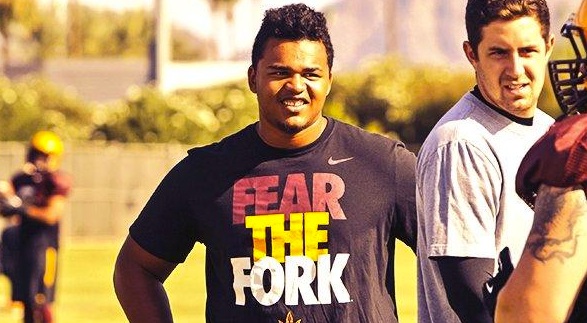 If you are out at a Gilbert High School Football game on Friday nights this fall it is very hard to miss number 71. Steven Miller, the starting left tackle is one of the best looking offensive lineman you will see in the state even before the game starts just when looking at him. Then after kick-off, you see why he will be competing in the Pac-12 starting next year.

To think however that Miller hasn’t always been looked at a no-brainer division I athlete for very long. It in large part was because he has totally changed his identity as a football player over the last couple of years.

“I used to think I was a receiver,” Miller said. “I played receiver throughout my childhood so it was kind of my thing. I was a basketball player too. So those two really helped me with my athleticism and has made the transition really easy. I’ve got the coordination now and it’s great.”

That translation he mentions is one that has seen him go from a receiver to a tight end to an offensive lineman since he first arrived at Gilbert High. Because of it, it took Miller a little longer to develop than most offensive lineman you see being recruited early and often at the high school level.

“When I came in, I wasn’t very strong,” Miller mentioned. “I was a basketball player who also thought was a receiver so I didn’t really focus on the strength side. So that was something I really worked on and really changed.”

But once that body transformation changed, boy did people notice. Miller went from having no college offers to a ton from major programs out west starting from the end of his junior season through spring practice leading up to his senior year. But there was still work to be done.

“My footwork,” he added. “It was good but needed to get better. It was a technique thing. It’s about chopping with little steps and not big steps. That’s something I really needed to work on and now that I have, it’s something that is getting better and better each and every day.”

Miller has put on over 20 pounds of muscle since his junior year when the offensive tackle project began at the varsity level. He dropped as his Coach Tim Rutt calls it, “the baby fat,” and looks like an absolute monster. In short order, this transformation has turned Miller into one of the best offensive tackles in the state with a commitment to play under Todd Graham at Arizona State.

But is playing tackle Miller’s future? His high school coach thinks he could be among the nation’s best in another spot.

“He is an outstanding tackle and has been great for us at that spot and will be at the next level,” Rutt said. “But the skills he has at guard, I think he has the potential to be an All-American at that position.”

“I think I can play anywhere,” Miller added. “I really just want to get on the field next year. That’s really important to me so I am going to do everything and anything I can to play. So if they want to put me at guard and that’s where they think I’ll be best at, then that’s where I’ll be. I’ll take any opportunity that I have.”

Being an Arizona State commit, he has been laser focused on the program on Saturdays and was right in front of the television for what has been the play of the season thus far for the Sun Devils, the Jael-Mary at the end of the USC game.

“I was sitting on the coach with one of my friends,” he said with a smile. “He through it up and when Jaelen came down with it, man I was going nuts. It was amazing.”

The pitch Miller received from Graham and the coaching staff when being recruited by ASU was about the discipline, character, hard work and resolve that the program strives for. In that exciting finish which capped off an unthinkable comeback, it was Graham’s words when he was recruiting Miller coming to life.

“It makes me really excited,” Miller stated. “To be going in there and knowing that everyone is thinking the same way as I am. To be resilient and to never give up and then to show it, it’s truly incredible. To be around people who want what you want and be on the same mission, it’s incredible. I am really excited for that and can’t wait.”

Miller is eager to get started but before he does that, he is one of the biggest leaders for the Gilbert Tigers and is taking advantage of every moment he has left on the high school gridiron.

Can Steve Miller Do Something Todd Graham Says Hasn’t Been Done In His Tenure?