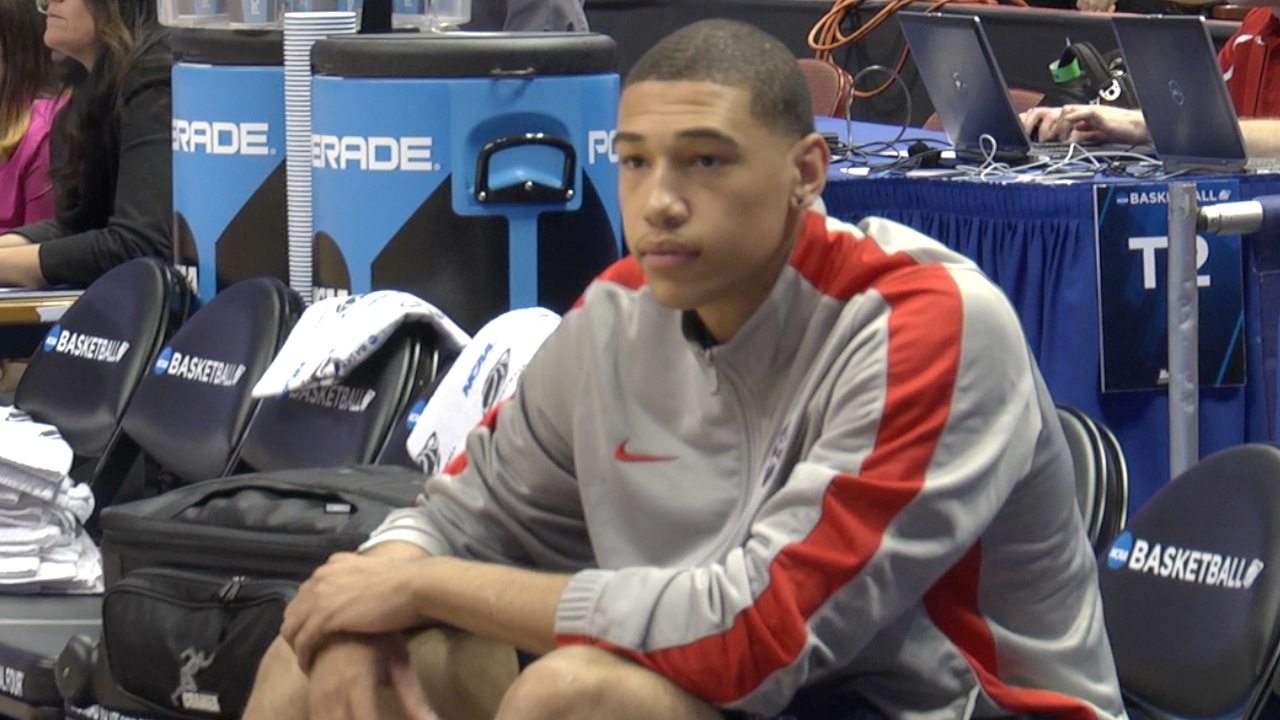 There might not have been a more improved player on the basketball court for the Arizona Wildcats last season than Brandon Ashley. For a team that had so many weapons and so much talent, even Head Coach Sean Miller acknowledged at one point that he was the key to what they did every night offensively.

On the same night that the Wildcats dropped their first game of the season last year ending an undefeated streak through the month of January at California, they had a loss during the game that happened before the final score was etched in stone. Ashley had broken his foot and would be done for the season.

It was a crushing blow to a team that had national championship aspirations at the forefront. The team rallied without him and still managed to make it to the Elite Eight despite his absence. But there is no question that his presence could have made a difference.

Since we saw the Wildcats at the end of last season, it’s been all business for Ashley who has been working to get back to 100% going into his junior year.

“A lot of it was just a waiting game,” Ashley said. “Waiting for it to be strong enough to do stuff. From that point, it was strengthening the areas around my foot. Your foot itself isn’t really something you can strengthen a whole lot so focusing on the muscles and ligaments around it was important.”

“We’ve moved at a methodical pace,” mentioned Head Coach Sean Miller. “To Brandon’s credit, he stayed in Tucson all summer and did a great job doing everything that the doctors and (athletic trainer) Justin Kokoskie asked him to do.”

With a surgically repaired foot like Ashley’s, that waiting game he mentions is the biggest part. But once he was cleared to begin training and to get back on the floor to rehab, it was also the opportunity to not just get back into shape but to also continue to grow his skill set.

“I was back on the court in early June,” Ashley explained. “I’ve basically had since then to work on all parts of my game. Working on strength and getting that explosiveness back mainly but at the same time also back to the basket and refining those post moves and everything.”

“He has been able to do really any skill workout,” added Miller. “Shooting, dribbling, running, jumping, everything that’s non-competitive for some time. He was released to do that in the summer. We really just started a few weeks ago allowing him to do things competitively. Since then, he has been in our practices and team workouts, he’s doing everything each of our players do.”

When you are out for the amount of time that Ashley was out and have to deal with being at the mercy of what’s best for your health to prevent further injury, Ashley had to spend a lot of time to himself sitting between his own ears. There were thinks even he said he learned about himself during the process.

“When it’s necessary, I can be patient and I focus really on the important things that I need to focus on,” stated Ashley. “With this injury, a lot of time was spent sitting back and waiting. So I really sat back and cheered on my teammates and making sure that they were doing all right.”

“He’s been through a lot,” stated Miller. “When it’s taken away from you like it was taken from him. I think when you talk to him, you’ll see he’s more mature, he’s one of our team’s leaders, he’s got a great perspective on things. He’s done an incredible job not just on the court working hard but also off the court as helping his teammates and doing a great job in school. I think we are all really proud of Brandon in terms of everything he’s gone through and how he’s handled it”

Miller stated that though he is back on the floor and participating in competitive environments at practice, he will still be brought along slowly. This could mean there could be some days or nights off for him over the first couple months of the season during the non-conference action. Miller said it will not be about his health, but more so the bigger picture.

That bigger picture is another run at a conference championship, and the hopes of the first Final Four appearance of the Sean Miller era which once again this season, the Wildcats will have the talent to achieve. For Ashley, while he is focused on getting himself back to where he was a year ago and improving off of that, his focus is more so on what the team can accomplish.

“My personal goals and team goals kind of go hand-in-hand,” Ashley mentioned. “I want us all to go out, compete and give it our all. If that happens and we play the right way, then everything else should fall into place.”