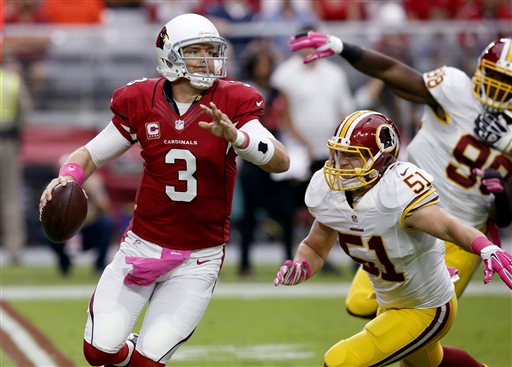 The Arizona Cardinals improved to 4-1 putting away the pesky Washington Redskins (1-5) 30-20 Sunday afternoon in Glendale. The Cards jumped out to a first quarter lead they’d never relinquish. Below are five things we learned in the victory.

1. First Things First…you usually don’t see a standing ovation during the two-minute warning but that was case inside University of Phoenix Stadium when the scoreboard flashed the Cowboys beating the Seahawks 30-23 in Seattle. So the Cardinals find themselves at the top of the NFC West with a trip to Oakland to play the 0-5 Raiders next weekend. There area plenty of areas to improve this week in preparation. The Red Birds committed 14 penalties for 108 yards, were 0-2 in the red zone and barely averaged three yards per rushing attempt. In the end it’s a win and one step closer to getting back to the playoffs for the first time since 2009. “We’re a long ways from thinking about the post-season,” quarterback Carson Palmer said afterwards. This was the type of ugly, sloppy game the Cardinals would have likely lost towards the end of the Ken Whisenhunt Era.

2. Shouldering the Load…Palmer played for the first time in over a month as he regained nerve feeling in his throwing shoulder. Finally healthy enough to appease Bruce Arians, Palmer was sharp completing 28-44 for 250 yards and two touchdowns in his first start since the regular season opener. “It felt good, I’m very pleased with where I am,” he said after. The offense re-incorporated the screen game and CP3 showed excellent zip and accuracy on several throws. He connected on eight of his first 10 passes and looked comfortable inside the pocket. He didn’t throw an interception and finished with a passer rating of 93.9.

3. Finding Fitz…it was nice to see Larry Fitzgerald get int the end zone for this first time season. Fitz caught a pass over the middle and dragged Redskins’ cornerback E.J. Biggers the final four or five yards completing the 24-yard second quarter scoring play. It was his first regular season touchdown since last December against the Rams. It marked the 88th of his career and moved him past Don Maynard for 12th on the all-time list. He has caught at least one pass in 154 consecutive games. Fitzgerald led the Cards in receptions (six) and yards (98).

4. Bringing the Heat…it was apparent from Washington’s opening possession defensive coordinator Todd Bowles was going to blitz quarterback Kirk Cousins early and often. DeSean Jackson had a nice game (three catches, 115 yards, touchdown) working against Patrick Peterson but Cousins and the ‘Skins were just 2-10 on third down conversions. Rashad Johnson had two interceptions, including a game-clinching pick-six and SAM linebacker Alex Okafor registered a pair of sacks. Cousins finished with 354 passing yards and two touchdowns but made more poor decisions than good ones. He was picked off three times total. Bowles was especially pleased with his unit’s effort in the second half.

5. Disappointment in D.C….last season Washington went 3-13. They’re on pace for a repeat performance in 2014 with just one win in six games. They’ve been outscored 129-91 in their five losses. The 21st-ranked rushing attack managed only 72 Sunday, 16 of those coming on the final play when Arizona was in prevent defense.