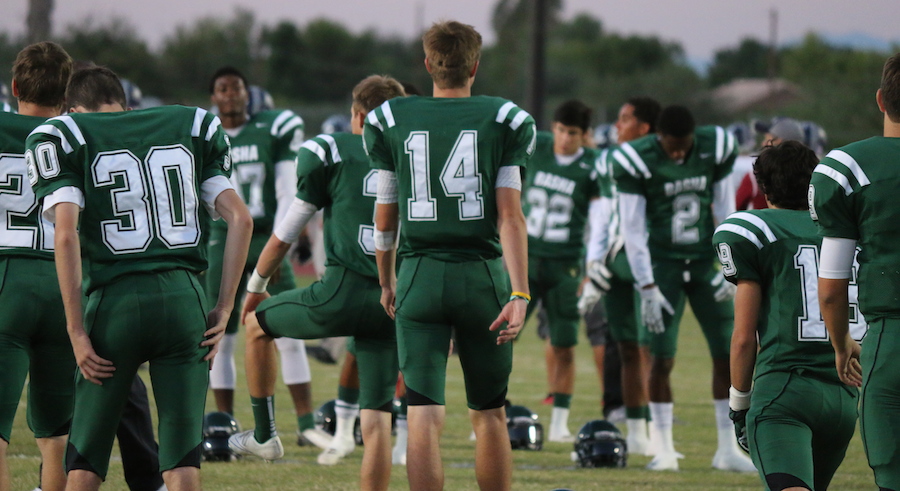 The Basha Bears have had quite a bit of success over past years. After watching them beat Perry 28-11, here are my takeaways of what has gone into their 4-2 start:

Kelley Is The Real Deal

There is a lot of buzz around the sophomore QB taking over for Zach Werlinger, and he showed it’s not just hype. Were there mistakes? Sure, but Kelley threw for three touchdowns, and could have very easily had a fourth if his receiver hadn’t tripped on a deep completion. He showed a lot of poise against a stout Perry defense that likes to bring pressure.

“We love Ryan.  Just because he is a sophomore doesn’t mean he can’t play, and he obviously can play,” senior defensive back Brandon Yamamoto said.

Kelley is not short on weapons at his disposal in this offense. He has a reliable runner in Zach Reed.  There is also the dynamic speedster, Doc O’Connor. O’Connor turned a ten yard completion into the opening score of the game, and Perry didn’t give him much space to work with. Kelley also has two big receivers in Jared Schmidt and Hunter Dean-Gibson, who both caught touchdown passes. There is plenty of talent to put up big numbers for the Bears.

What impressed me most was Basha’s defense. Yes, the offense has received plenty of attention, and deservedly so, but the Bears have a defense that can get into the backfield. Bailey Huggins, and J.D. Alexander hit Perry quarterback Austin Nightingale constantly and wouldn’t let the dual-threat quarterback get to the outside where he could run. Linebacker Zac Archer stuffed a 4th down run inside Basha’s five yard line to swing the momentum back in the Bear’s favor, cornerback Joe Storm had a crucial interception, and Brandon Yamamoto blocked a punt and recovered a fumble to seal the victory for the Bears. The unit as a whole played very well and came up big each time the team needed them to.

The Bears are now 4-2, but have a very tough portion of their schedule coming up. They host Hamilton, go to Highland, and host Chandler over the next three weeks. Building momentum off of this win will be crucial for the success of the coming weeks.

“There’s some things we need to fix obviously, but we’re going to get that fixed and we will come ready for Hamilton,” Yamamoto said.

Spring Ball Notebook: What To Watch For In 2015