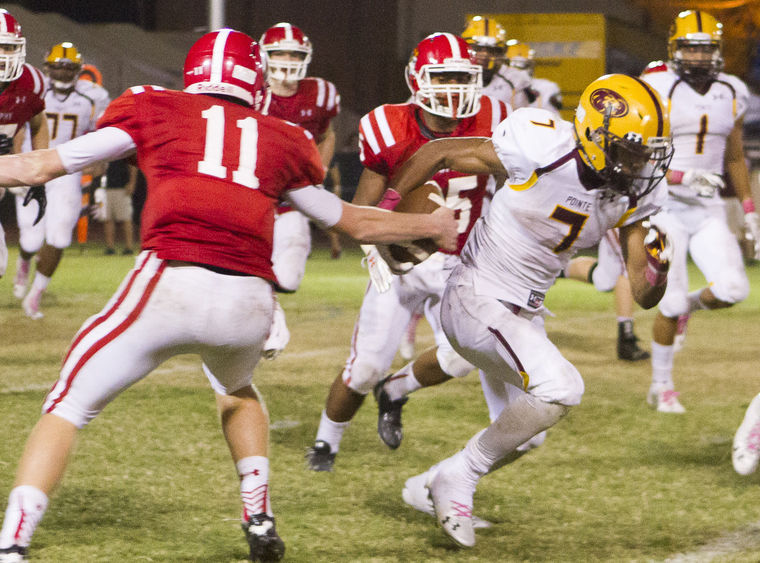 The handshake, and the confident smile that accompanied it, said it all.

“We’ve improved a lot since then,” Brophy coach Scooter Molander said, when informed the reporter hadn’t seen them since the opening loss in Las Vegas.

Oh, boy, have they ever.

Brophy continued its return to relevance on Friday when it knocked off defending state champion Mountain Pointe 31-28 at Hoy Stadium to show just how far the Broncos have since come both teams had far different experiences at Sollenberger Classic to open the season.

Mountain Pointe (6-2) looked like it was in line with last year’s state title championship squad and the Broncos (5-3) was still searching for an identity after a 5-7 campaign in 2013.

Seven weeks later the initial impression couldn’t be further from the truth.

The Broncos have won four in a row while playing the state’s toughest schedule to turnaround the original perception as several young players, like sophomore running back Noah Pettenger and sophomore wide receiver Robert Brooks, have given the team a palpable energy that was far superior to Mountain Pointe’s in the early going.

“I would say the difference has in us getting better been the play of some of our younger players,” Molander said. “These guys have really developed and have been productive.”

Pettenger, who is listed at a generous 5-foot-9 and 170 pounds, was elusive, strong and the Pride’s defense biggest frustration.

He finished with seven catches on 106 yards mostly on screens and short dump passes.

“We call him the joystick,” Molander said. “He is really difficult to bring down and he has explosiveness out his cuts to go with that. He is difficult to see and a very nice change up to Ryan Velez, who is our power back.”

Junior quarterback Cade Knox, who ran for 98 yards and threw for 199, was very impressive as well as he continues to use his deceptive speed and big body to extend drives with his feet.

The Brophy offense had 18 first half first downs and kept the ball for more than 18 minutes in the first half against the same defense that held Hamilton to minus 23 yards rushing.

“It was awesome,” Knox said. “It was definitely the plan to run the ball a little bit, but I ended running more because you have to take what the defense gives you. I forced some throws, but the team picked me up.”

The defense did its part as well as players like Jerod Johnson, Jack Garcia, Jack Haddon, Cole Wiegand, Dante Diaz-Infante, Isaiah Oliver and Connor Murphy did enough to get the win.

One very few that was possible eight weeks ago.

“Coming out of Vegas people wrote us off,” said Knox, who said he would have attended Mountain Pointe if he didn’t go to Brophy. “After we beat Desert Ridge they still said we weren’t an elite team. I think this puts us in the elite conversation.”