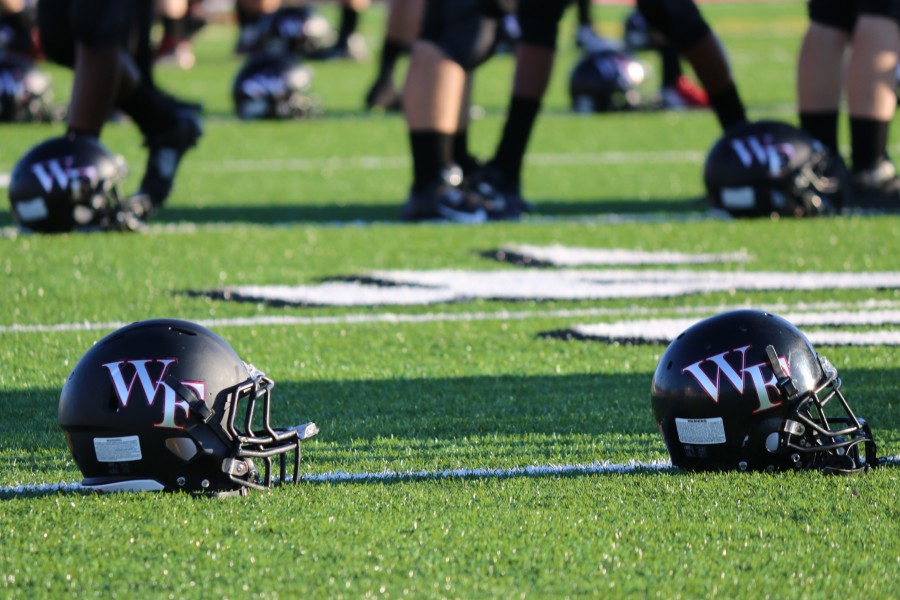 A quick glance at the final score of a 17 – 10 win over Queen Creek should tell how well the Williams Field defense played Friday night, limiting a Bulldogs’ offense averaging over 43 points per game this season to its lowest scoring output since 2010.

“The defense played phenomenal,” Williams Field head coach Steve Campbell said after the game. “It was nice to have (some guys) back healthy and those guys are starting to get up to in-season speed.”

But a further look into the Black Hawks’ defensive success may reveal their secret: The offensive line.

The Black Hawks’ offensive line, which includes Jacob Rohde, Marlon Mcrae, Jeffrey Maycock, Austin Carter, Jimmy Lambert, and Arizona State commit Cade Cote among others, dominated the time of possession in Friday’s game, helping to keep the defense fresh. As a result, the Black Hawks shutout the Bulldogs in the first half, stopping them on fourth-down inside the red zone to end one scoring threat.

“In pretty much any game there’s a couple of keys,” Campbell explained. “One is the turnovers, winning the turnover battle. The second one is time of possession.”

Dominating the time of possession kept Queen Creek off the field and prevented Bulldogs’ running back Weston Barlow from running wild like he did in last year’s semi-final playoff game.

“(It) allowed our defense to play fresh and play fast,” said Campbell about the offense’s performance. “Having kids play one side of the ball really helps the situation (also) because our offensive line is out there driving the ball and the defensive line is fresh when they come out.”

Queen Creek finally broke the shutout in the third quarter, scoring on a field goal by Zach Glaess. The Black Hawks responded with a scoring drive that burned over seven minutes off the clock and ended in a short touchdown run by Braden Bushman, his second of the night.

Campbell was asked if it’s a luxury to be able to hand the ball off to Bushman. He answered in the affirmative before lavishing more praise on his offensive linemen.

“It’s a luxury, but if you ask Bushman he’d tell you it’s a luxury to run behind that offensive line,” Campbell said. “Just that mentality that (we) know we can run the ball is nice to have, especially in a game like this.”

After Bushman’s second score of the night, the Bulldogs drove deep into Williams Field territory before the Black Hawks’ defense made another fourth-down stop inside the red zone. It was just another example of the defense making plays as a result of being “fresh” after a long drive by the offense.

“It was nice as an offensive coach to have the defense feel comfortable with what they were doing,” Campbell said. “I felt that they were wired in and ready for the matchup.”

Bulldogs’ running back Weston Barlow did score on a 6-yd touchdown run late in the fourth quarter, but only after an interception gave Queen Creek a first and goal at the Black Hawks 27-yard line to make the score 17 – 10 with 3:17 remaining in the game.

The offensive line took it from there, leading the Black Hawks to a couple of first downs before quarterback Weston Murphy lined up in victory formation to seal the win and keep the defense fresh for the next game.