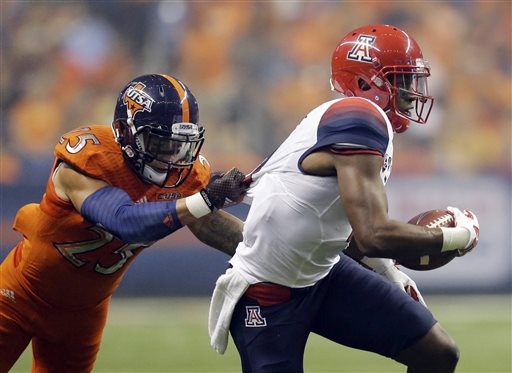 Maybe not in the mind of Arizona head football coach Rich Rodriguez who somewhat downplayed the redemption factor Thursday night in Autzen Stadium when the Wildcats invade Eugene for a showdown with Oregon in a battle of unbeatens. With that being said, it’s a safe bet the Ducks haven’t forgotten last season’s 42-16 drubbing which knocked “The Quack Attack” from any Rose Bowl dreams.

It’s a different year with different players but you can bet the Ducks’ defense will make some adjustments after falling behind 35-9 last year.

“They mix up a lot of looks,” star redshirt sophomore wide receiver Cayleb Jones told Sports360AZ.com’s Brad Cesmat in a phone interview Tuesday morning. “They really sit in the coverage to allow you to scheme heavy. They move around in the back-end and their [defensive backs] are really quick.”

Quick and athletic has always been a theme for the second-ranked Ducks (4-0, 1-0). Jones believes his roommate and quarterback, redshirt freshman Anu Solomon will need to be patient in order for the ‘Cats to sustain consistent offensive success.

“They’re really well-coached and disciplined,” he explained to Cesmat. “So you have to take what they give you and not make mistakes on your own [and] turn the ball over…this is a game we’ve looked forward to all off-season.”

Many others around college football are also looking forward to seeing how UofA (4-0, 1-0) performs under the bright lights in primetime against a team many feel is the best in the nation. Their only other road game this season was a hard-fought 26-23 win over Texas-San Antonio in the Alamo Dome back on September 4th.

Thursday in Autzen Stadium against the ducks on @espn no better stage, no better opportunity. This is why we play college football.

Jones, a transfer from the University of Texas, leads Arizona in catches (29), yards (475) and touchdown receptions (six) and is just one of a host of playmakers for Solomon and a Wildcats’ offense which has averaged 42 points per game.

The ‘Cats were off last weekend after their improbable last-second 49-45 win over Cal.

Kickoff is 7:30 with television coverage on ESPN.