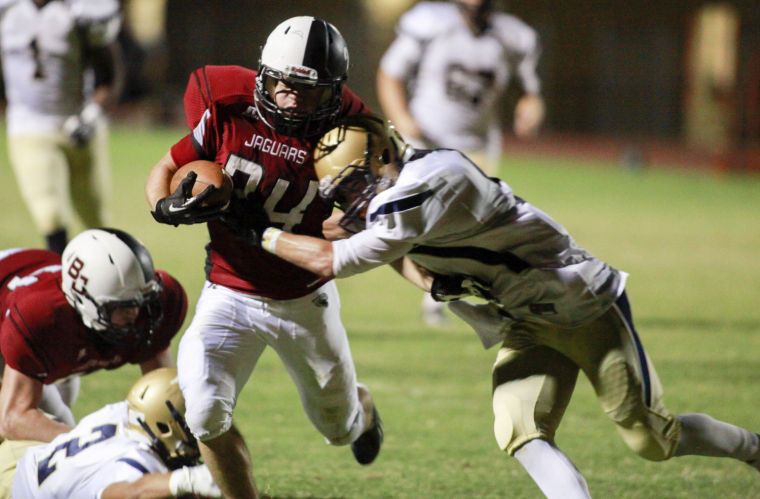 In the first three weeks of the season, Boulder Creek has knocked off three very respected programs in Mesa Mountain View, Westview and Desert Vista.

All three programs have lost some momentum but have been in state championship games since 2006 and produced plenty of banner seasons.

It is the first time the program has started 3-0.

The Jaguars might be the surprise team of 2014 as first-year coach Brandon Willard has brought a new feel Boulder Creek after former coach Dan Friedman left to be part of the Arizona Christian University staff.

Willard couldn’t be happier to be at a place that didn’t even exist when he was growing up in the Northwest Valley.

“At the beginning of the year no one put us on the map at all,” said Williard, who coached the previous two years at Amphitheater. “I think maybe the hard work and resiliency the kids had in the offense coupled with me coming in here with a new philosophy and doing things a little differently energized them.

“I think things were a little stagnant. Now we are up temp, offense moves, defense flies around. Plus, we have a great mix with our coaches and it is a great time right now.”

It was an impressive showing in the 41-21 win over Desert Vista as the defense limited the Thunder offense while the offensive continues to be shine behind junior quarterback Gunther Johnson, who had three touchdown passes, 102 yards rushing and 202 yards passing against Desert Vista, and running back Blake Dawson.

“These guys are really starting to shine now,” Willard said. “Obviously we are doing something right on offense because we keep making plays.

“It’s great to see the success they are having.”

Willard was hired in February and it has been a growing process every since as Boulder Creek has a favorable schedule that counts games against Horizon (10/17) and Pinnacle (10/31) as the most difficult.

“It was different but it is working out great,” said senior safety Ryan Parenteau, who Willard called the best leader he has ever been around. “He is a great players coach. After the first win (at Mountain View) everyone bought in.

“I had brother who played at BC and they never did anything like that. We are going to go 10-0.”

Willard is trying to temper the excitement knowing it is a long season, but he feels like everyone is starting to understand what can be done at Boulder Creek.

“At the beginning of the year no one put us on the map at all,” he said. “I think maybe the hard work and resiliency the kids had in the offense coupled with me coming in here with a new philosophy and doing things a little differently energized them.

“I think things were a little stagnant. Now we are up temp, offense moves, the defense flies around. Great coaches and it is a great time right now.”

And if they offense continues to execute at high level as it did against Desert Vista, rattling off nearly 500 yards of offense, and the defense keeps knocking people around it could be pretty special in Anthem.

It’s an outstanding community,” Willard said. “It’s a blessing. I grew up in the Northwest Valley and Anthem wasn’t even there. The community support is unreal. I had that at Liberty (as an assistant) but never experienced it a head coach. They’ve embraced everything. It’s a great feeling.”

A feeling Willard and the coaching staff won’t let become a thing of the past.

“We became complacent in second half against Westview and it kind of happened again,” he said. “We have to keep harping on it every single week and they are going to get better every single week.”

And beyond, really, considering most of the top contributors will be back next season.

“We are so junior laden that really is just the beginning,” he said. “We have a lot of work to do, but we if can continue to get better and follow the lead of someone like Ryan Parenteau there is no telling what we the future brings.”