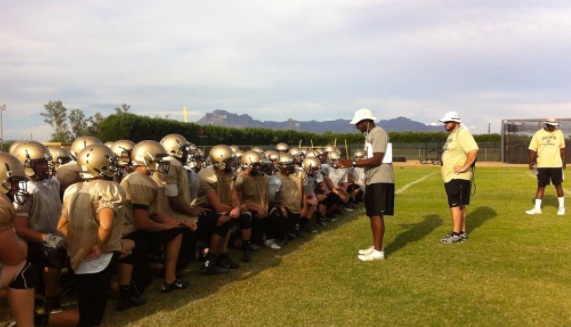 Apache Junction has had trouble finding success and stability with their football program over the last few years. They have won just 11 games since the 2010 season and have had three different coaches in that span.

This past off-season a new coach, making it the fourth since 2010, has come and from the looks of things, has already changed the environment within the program without having yet played a snap.

Vance Miller started his coaching career in Arizona with Saguaro 20 years ago as a freshman defensive coordinator. After Saguaro, he took a break from coaching and played semi-pro football in the Arizona Football League as a linebacker. He got back into coaching after playing where he spent time as a head coach at the Pop Warner level in Mesa and Scottsdale before taking a job with Desert Mountain for three years as their junior varsity coach. Then onto Paradise Valley for two years under now Arizona Christian coach Donnie Yantis before coming to Apache Junction as the defensive coordinator in 2013.

Having been on the staff for the Prospectors last season, he knew the area, the players and where this program needed to improve to be heading the right direction.

On day one at the helm for Apache Junction, he called it “man training.”

Coach Miller mentioned this has nothing to do in regards to gender as he has women on the team. It meant an attitude change based on how Apache Junction’s identity has been in the past.

“The man training was coined as more of a maturity slap in the face,” Miller explained. “We have had a lot of kids in A.J. who have been coddled and in the past they were given just enough to get by because if we pushed them too hard, they were going to go away.”

Coach Miller and his coaching staff’s mentality has not driven players away in the early part of his tenure, it has actually raised their numbers by about 45%. Between varsity and junior varsity in 2013, there was about 55 kids on the field combined. Going into 2014, the program is pushing 80 as of now for both levels combined and the word of Miller’s way is getting out in the community.

“I guess you can say I flipped it on it’s ear,” he mentioned. “I have changed the weight training approach. I have my masters degree in that area. I came in with my philosophies and I really ran them through the ringer this summer. But with good response.”

Miller understood that taking on this approach could have gone one of two ways but fortunately, the kids took it all as a positive and the buy in has been tremendous.

“We know we are not quite to the Saguaro’s, the Queen Creek’s and the Williams Field’s in our division,” Miller stated. “Those teams have had this attitude for years and people are already feeding in. But we are coming in with the attitude.”

There are many facets to what could help in the Prospectors to having a major turn around in year one under Coach Miller. The first, is they have 26 returning seniors who know his scheme on defense and understand the offensive philosophy as last year’s Offensive Coordinator Mike Brown is back with the team as well.

“For a school this size, I haven’t seen 26 seniors on a team ever,” Miller explained. “So this is our time to make some waves and some progress.”

They return a in-coming senior quarterback that has a skill set that is poised for a breakout 2014 season in Adam Abbatacola. He is a 6-4, 185 pound lefty who shared reps under center as a junior which limited his exposure. Coach Miller mentioned that Princeton has already verbally offered him to play at the next level so not only does he have the skill, but also the smarts as he sports a 4.2 GPA.

“I am originally from the mid west and in my seven years of coaching, he is easily the best that I have coached,” said Mike Brown. “He gives me the ability to go with basically anything offensively that we want to do. The only temptation that I have with him right now is putting too much on him. He is such a clean-cut All-American, we call him our Captain America.”

“Any time I get the chance to talk about this kid I do,” Miller said of Abbatacola. “I would sit in a room and argue with anyone that he is the best left-handed quarterback in the state. There isn’t a D1 school out there that shouldn’t at least take a look at him and anyone who saw him play this summer would say the same thing. He is one of three of the best three quarterbacks I have ever coached and he is one of those guys that if I had a daughter, I wouldn’t mind if she dated him.”

Another one of those three happens to be former Paradise Valley standout and current Boise State Bronco quarterback, Ryan Finley.

On the defensive side of the ball, A.J. returns safety and captain Patrick Benavidez who Coach Miller calls “Father Defense” because he is always speaking on behalf of the team. He has been moved from corner to safety this offseason because of his great athleticism and nose for the ball. The team is also excited about an up-and-comer on defense at the Middle Linebacker spot named Cody Morgan. He is 5-11, 200 pounds and coach calls him, “as strong as an ox and in a good way, is mean.” Just one of those players that just cant wait to get the pads on and someone who is poised for a big year defensively.

Under Vance Miller, this new era is a new brand and it’s a formula that looks to change the outlook of football in Apache Junction for many years moving forward.

“I always say, Apache Junction is out on an island,” stated Miller. “We are not in an area like a Chandler where people are building and moving too and new communities. We are a community and nothing is getting built out here and no one is moving this way and if they are close, they are going to Desert Ridge, Skyline or Red Mountain.”

“We are trying to show that A.J. is worthy of being a competitive football team and number one, keep the kids who are living in this community here and that right there will be contagious,” he added. “I can tell you already that the virus is spreading”

@mikal_bridges talking what it means for him to be in Phoenix after the @Dbacks held a Mikal Bridges Appreciation Day this summer and he spent some time in Tempe closing down Vine Tavern. @Sports360AZ https://t.co/TYwITuQiFC
View on Twitter
1
3