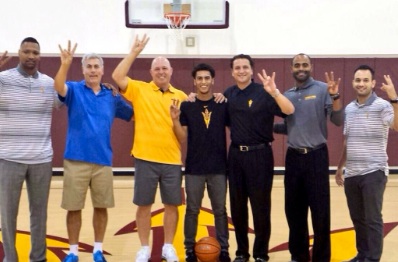 The future of Arizona State basketball is as bright as the Arizona sun as on Wednesday night, one of the top prospects in the state announced his commitment.

Blessed beyond belief to be a Sun Devil thank you to everyone who’s supported me in this process #FORKUP pic.twitter.com/I0XtxXm4cJ

“It’s all mixed emotions but it is all great,” Markus Howard said. “I am relieved, I am excited and I am ready to work and put in the work to be a point guard at ASU. I can’t express enough how happy I am to be a Sun Devil.”

Howard, just a sophomore at Perry High School, broke onto the high school scene in Arizona with a remarkable freshman season. He made such an impact that Herb Sendek put on the full court press to have him in the mix as soon as possible even though for Howard it is so early in the recruiting process.

“Coach Sendek and his staff explained to me how I was going to be their guy for the next four years and when I get to college,” Howard explained. “It was something I feel I did not need to wait on to make my decision. I feel perfectly comfortable about everything with ASU. It made me want to commit now so I could get it out of the way.”

Leading up to Howard’s decision, he had two meetings with Sendek and his staff. He first met with them for about four to five hours last friday where the Sun Devils made their pitch of the vision they see for their program with Howard in the mix. Howard returned with his family on Wednesday to inform them that he wanted to commit.

“After talking with Coach Sendek in the film room for four to five hours about his vision, I spent the weekend talking about it with my family,” mentioned Howard. “I wanted to make the best decision possible for me and my family and that was to be a Sun Devil.”

ASU’s landing Howard not only adds one of the state’s top basketball prospects, it also brings in a new recruiting coordinator to the mix going forward.

“I know a lot of top recruits out around the country,” he said. “And I am going to be recruiting harder than the coaches at ASU. You cant trust me by that. And just trying to build this program to be a powerhouse in Arizona for basketball.”

Growing up in Phoenix since the age of three, Howard has been familiar with the program long before they started recruiting him. The era that really began his interest in the Sun Devils was while James Harden sported the maroon and gold and it has only grown since another local prospect, Jahii Carson arrived in Tempe as well.

“Since the James Harden era I have been a real fan,” Howard explained. “He brought incredible excitement to ASU. And these last couple of years, Jahii Carson making a HUGE impact on ASU. He is a player that I have watched since he was a sophomore in high school.”

“Jahii is probably my favorite Sun Devil because I can just relate to him,” he added. “Being a guy from Arizona and playing a similar style of games.”

So proud of @markushoward11 this is what u worked for, all the nights in the backyard paid off! #ASU pic.twitter.com/pttMN3hGeS

What’s next for Howard now that his future has been decided on? Trying to build off of an incredible freshman season that saw him be an All-State performer and averaging over 23 points per game as a freshman. He has set the bar very high for himself and there is one word that Howard uses to describe how he plans to raise that bar.

“Work,” Howard stated. “Just continuing to put in the work and every time I step into the gym, every chance I get, I am going to go 110% no questions asked and work my butt off no matter the situation.”

“Now that this decision is out of the way, I also have more time to focus on the most important things to me and that is school as well as being the captain here at Perry High School,” he mentioned.