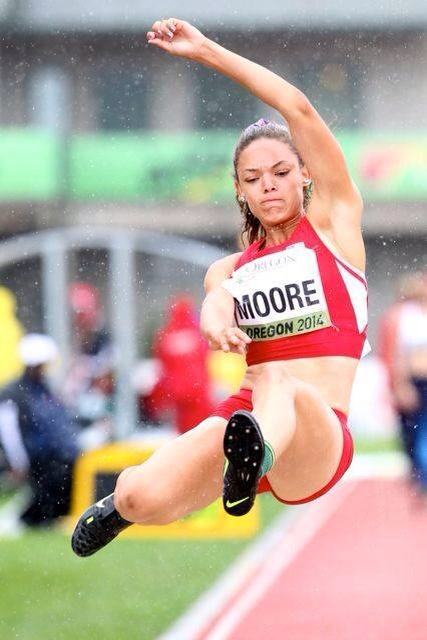 It is natural for a high school to feel a sense of reflection and nostalgia when they graduate and move on to future endeavors.  Ashlee Moore is no different.  One word seems to come to mind when looking at her accomplishments: versatile.

The Hamilton High School product was not only an accomplished basketball player, but also an incredibly decorated track star.   In her high school meets, Moore would compete in the 100 hurdles, long jump, high jump, as well as a slew of other events.  In her club meets, she participated in the heptathlon, an event consisting of the 100 meter hurdles, high jump, shot put, 200 meters, long jump, javelin, and 800 meters.

Moore’s success culminated at the USA Track and Field Outdoor Championships, where she won the USA Junior heptathlon.  Not only did she win a national championship, but she also gained placement on Team USA for the International Association of Athletics Federations Junior World Championships.

“The whole plan going in was just going in to compete and not focus too much on places or points and numbers, all that. Just trying to focus on myself and so the whole meet I had this mentality that no matter what, I did what I could and that’s all could do and so even after, it didn’t really feel like I won.”

Moore took 13th place in the heptathlon at the IAAF World Junior Championships.  Competing and succeeding on the national and international stage led to a realization for Moore.

“It lets me know there is a lot left in me that I don’t know.  (There is) a lot of untapped potential still.  I think over the years with more train and, from now on year round training, which is something I’ve never done before, there’s definitely a lot left in me and I have a lot left to prove.”

The world junior championships were special to Moore because of her success there, but also because the tournament took place at her future home track in Eugene, Oregon.  Moore has committed to run track at the University of Oregon, a goal that had she had been wanting for a long time.

“Oregon was on my list for a really long time.  I ran my first track nationals at Oregon in 2004.  I came home from that meet knowing that’s where I wanted to go to school,” Moore said. “The community support, the feeling that I’m at home when I’m not at home was definitely the biggest thing for me and they definitely had that.  They had everything I wanted in a school.”

Moore has spent the entire summer training to be ready when she gets to Track Town in Oregon.  Her coach, Tim O’Neil, crafted a training program to optimize her performance in each event and have her ready for the season.

With accomplishing so much and going to a school that has set the standard for track and field, it seems to be a logical progression for Moore to set her sights on the 2016 Summer Olympics in Rio de Janeiro, but she is focused on taking the next steps in her progression as an athlete.