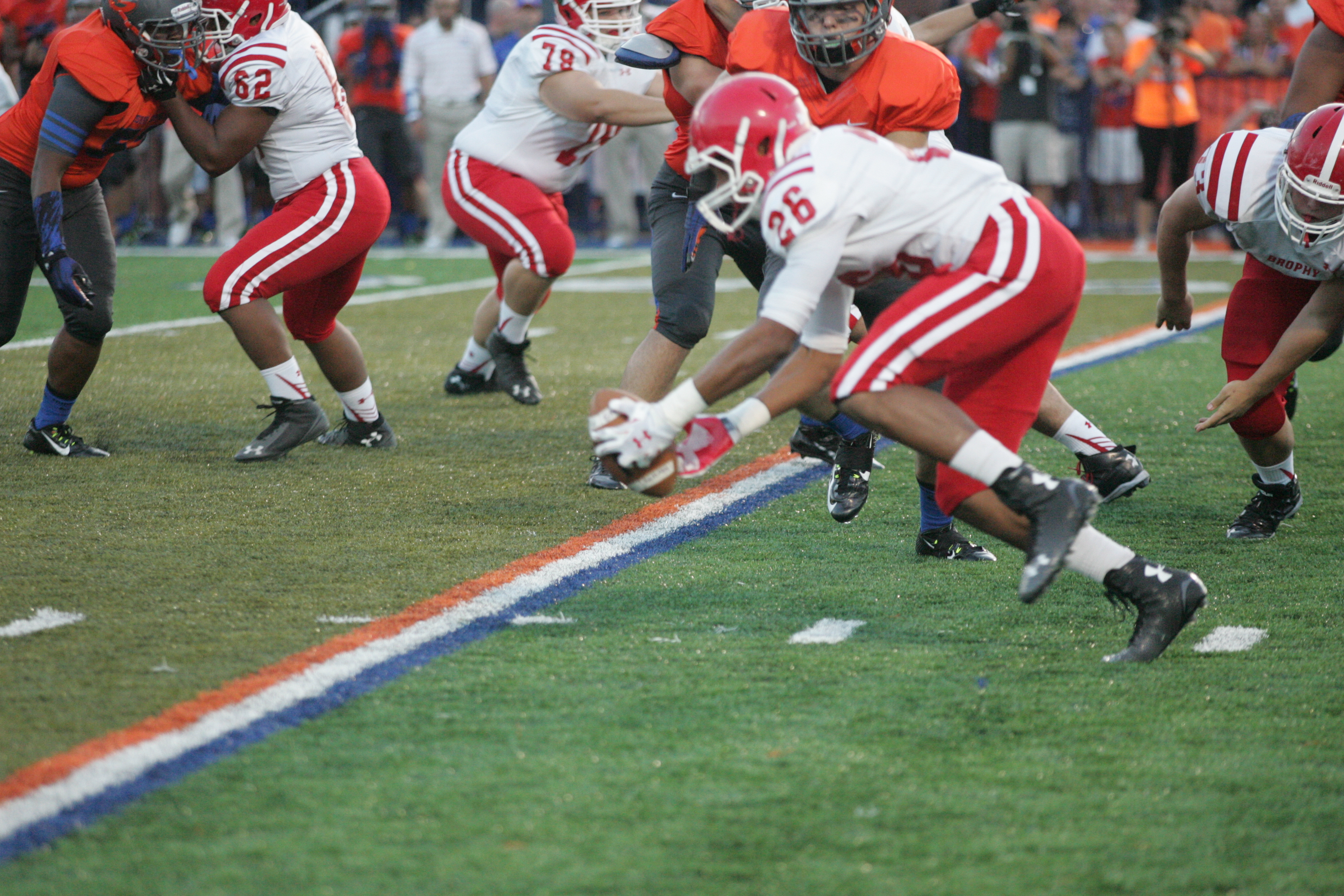 LAS VEGAS – The school crest on the side of the Brophy helmets might have a few smudges and dents after a troubling season opener.

The team’s character and resolve, however, remain unscathed.

The Broncos were overwhelmed 44-0 on Friday by Bishop Gorman in the first game of the 2014 Barry Sollenberger Classic.

The struggles started on the first play from scrimmage when a fumble foretold what the evening  at Fertitta Field in was going to be like for Brophy.

Gorman, ranked No. 1 to start the season by USAToday, had too much size,  speed and continuity for the Broncos to challenge the Gaels on their intimate and beautiful venue.

“That’s a tremendous football team,” Brophy coach Scooter Molander said. “They are not ranked No. 1 for nothing.”

Brophy had to be at its best in order to have a chance against Gorman, and in reality, the Broncos haven’t been at that level of play in some time.

Dating back to the 2012 state semifinals the program has won just four of its last 12 games. There have been injuries to some of their top players to hamper the ability to make plays, but right now having the state’s toughest schedule hasn’t been kind to the winning percentage of the Broncos.

“We are not a 4-6 program,” Molander said, referring to last year’s regular season. “We have never been. Ever. That was tough. There’s some explanation for it but no excuses for it.”

The takeaway from last season – and last night as well – was the fact that there was never a sign of team infighting or frustration on the sidelines while respect and pride remained intact.

“As the season continued on we had tremendous senior leadership last year and they understood the importance it for the next group,” Molander said. “They really spread the gospel of that message.”

The schedule hasn’t changed other than adding the Gorman game so Brophy will  be challenged nearly on a weekly basis that includes games with Division I contenders Mountain Pointe and Hamilton and Division II perennial champions Centennial and Chaparral.

“The best thing (about the game against Gorman) is we are not going to play on a better stage,” Molander said. “Cardinals Stadium is certainly a bigger stage, but not the venue. (Fertitta Field) is very tight and beautiful. This is going to help us down the road.”

While the trip will back to Phoenix will come with plenty of the Broncos to mull over, one outsider believes there are good things ahead in 2014 for Brophy.

That’s because come Monday, and beyond, the dents and smudges on the school crest will be gone.

“At the end of the day it was week 1 and all of us are going to be in a different place 10 weeks from now,” Gorman coach Tony Sanchez said. “Hopefully, we both get progressively better. Nobody does it better than Scooter. I’ve known him for a longtime and have tons of respect for him and his program. I’ve been on that end, too.

“They’ll have a good season.”