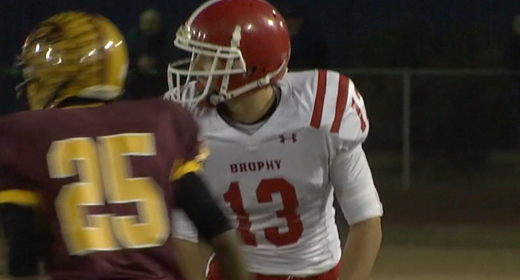 The 2014 high school football season is upon us.  For some, the season kicks off in just seven days.  Here are some of the marquee match ups for season openers next week, as well as a new storyline between heated rivals squaring off in two weeks:

Brophy tested early: The Brophy Broncos start their season off with a bang.  Not only do they head up to Las Vegas to open the season, but they play the USA Today #1 team in the country in Nevada’s Bishop Gorman.  Both teams are participating in the Sollenberger Classic, a showcase that honors Barry Sollenberger, who was integral in recording the accomplishments of Arizona athletes.  Bishop Gorman has been one of the elite high school football programs for quite some time.   The football team has won the Nevada state championship the past five years, and it will be the fifth time appearing in the Sollenberger Classic.

Mountain Pointe looks to continue streak: The Mountain Pointe Pride are the other team representing Arizona in the Sollenberger Classic, and they took down Bishop Gorman in last year’s showcase. The 21st-ranked Lions are coming off an undefeated season and a Division-I Arizona State Championship.  They will take on the 2013 Nevada Runner-up Reed High School.  The Sollenberger classic will be played in Nevada on August 22nd and 23rd.

Ironwood Ridge-Liberty square off: This game last year was an absolute barn-burner, with Ironwood Ridge escaping with the win 42-40.  Liberty opened the 2013 season with two tough losses to Ironwood Ridge and Desert Edge, but bounced back with an 8-4 record.  Ironwood Ridge got off to a hot start last year before a tough second half to their season that ended by getting knocked out in the opening round of the playoffs by Marcos de Niza.  Both teams will look to start their season off with a high note in a tough season opener.

A new twist in the Chaparral-Saguaro rivalry: The Chaparral-Saguaro is one of the most heated rivals in the state of Arizona.  Even though the teams are no longer in the same division, there is no love loss between the two Scottsdale powerhouses.  The two teams are filled with talent.  This game features two players who many think are the top two recruits in the state in Saguaro Wide Receiver Christian Kirk and Chaparral Offensive Lineman Keenan Walker.  One other storyline is both team’s offensive coordinators.   Former ASU quarterback Sam Keller is in control of the talented offense at Saguaro.  Chaparral’s offensive coordinator is Rudy Carpenter, who beat out Keller for the starting job at ASU, eventually leading to Keller’s transfer to Nebraska in 2006.  These former quarterbacks who battled against each other to stay on the field eight years ago will share a field on August 29th.