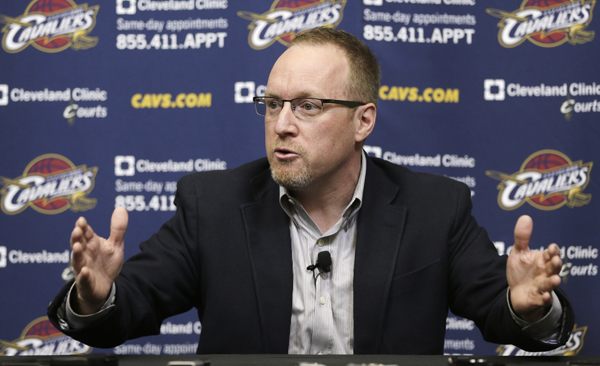 One would be hard-pressed to find a better success story than David Griffin’s.

Or anyone who’s happier in Cleveland, Ohio right about now.

The Cavaliers new general manager has been graced with a number one overall pick in Andrew Wiggins and now the best basketball player on the planet in the past three weeks after Lebron James made his homecoming official Friday morning.

For many, they believe it couldn’t happen to a better person. The outgoing former Phoenix Suns intern and media relations member is now overseeing one of the more talented teams in the NBA.

Basketball has always been in Griffin’s blood, as has a never-ending, non-stop work ethic on his steady rise up the NBA food chain.

“Well, he kept telling people he could do my job better than I could when he was just a kid,” former Suns owner Jerry Colangelo told Sports360AZ.com’s Brad Cesmat in a phone interview Friday. “You don’t have to motivate Dave Griffin about getting a job done.”

Griffin, who eventually rose to be a Senior Vice President of Basketball Ops here in the Valley eventually took a similar position with the Cavs in 2010. He was promoted to general manager after Chris Grant was fired this past February.

“Griff has done an excellent job already,” Suns Hall-of-Fame broadcaster and friend of Griffin Al McCoy told Cesmat Friday. “Those of us that know him are pleased…he’s a fine young basketball mind.”

You can bet he’ll be burning the midnight oil and cell phone minutes to make it happen.