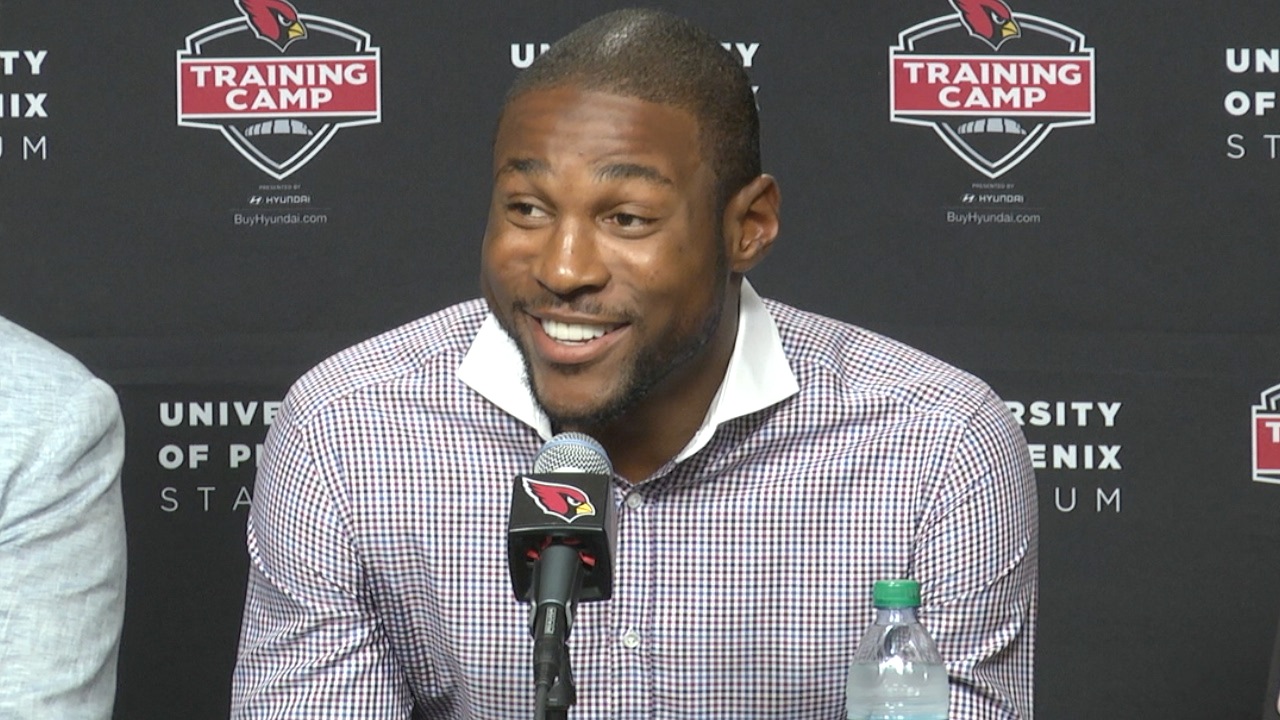 Patrick Peterson and the Cardinals made it official as they met with the media to discuss the five year extension worth $70 million, $48 million guaranteed. It makes the All-Pro Corner Back the highest paid at his position in the league and fulfills dreams he has always seen for himself.

“I always had visions of being the highest paid corner back to ever play the game, and now that I am, it just feels so surreal,” stated Peterson.

“Patrick’s earned this and that’s what I’ve told him as we went through this process,” stated team President Michael Bidwill. “Being he first of the 2011 class to sign, it’s really a signal of how much he wanted to be a Cardinal and how much we wanted him to be a Cardinal.”

Under the new collective bargaining agreement, this offseason was the first that the Cardinals could meet with Peterson and his representatives to discuss his future with the team. Cardinals General Manager Steve Keim noted that and said they wanted to be aggressive. The process took some time but it left everyone with smiles in the end.

“There are always some peaks and valleys and we had to approach each obstacle one by one,” explained Keim. “As we got closer, I got more and more excited about it. It took both sides. That was the key to it. But the fact that Patrick wanted to remain here was the most important part.”

For someone who has accomplished so much in just three years in the league, the 24 year-old Peterson still feels the drive to be great. Achieving this contract only scratches the surface for a player that has his sights on a Super Bowl ring and to one day be inducted into the Pro Football Hall of Fame. With this deal being done, he feels like what he has done already puts him in position to do so and it won’t change how he goes about his job everyday.

“I don’t feel like my responsibilities have grown because I’ve been the guy that wants to get better each and every year, I want to be the guy that leads this team, I want to be a face of this organization and I have already accomplished that,” said Peterson. “It’s now getting championships.”

While all this was going on, Peterson maintained that he was still going to come to work every day and do his part. A hold out was never an option and his responsibility to lead the team and do his part, especially during training camp was of the utmost importance. With that being said, he is very glad that the deal is done and now he as well as the team can move forward.

“It’s definitely a relief,” Peterson explained. “I am glad it’s over with. But it was definitely not on my mind as I was going into training camp. I wanted to lead my team and didn’t want this to be a focal point.”

It has been well documented on Twitter the whose better debate between Peterson and Seahawks corner Richard Sherman. He along with Joe Haden of the Browns got their pay days earlier in the spring as Peterson watched his negotiations with anticipation. But as for Sherman, Peterson says it’s just him having fun.

“I don’t know how he feels about it but to me, it is just fun and healthy competition,” Peterson said. “I am having fun with it, sometimes he seems to be a little salty about it. But it is what it is. I do not have any problems with Richard, I don’t have any beef with him, I am just having fun. But I think it’s going to make me take my game to the next level.”

“I know we have had our exchanges over the last month or so and obviously he is still exchanging words this morning, but it is what it is,” he added. “I have no hard feelings against Richard, I wish him the best of luck throughout his career and this season and I guess it will be must watch TV when we play seattle.”

In case you are wondering, the Cardinals and Seahawks face off for the first time on November 23rd in Seattle.