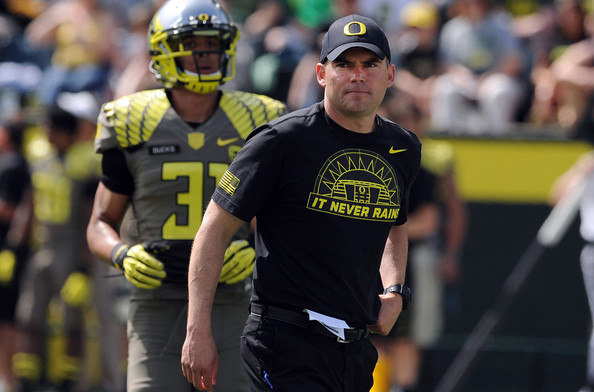 On the first day of the 2014 Pac-12 Football Media Days, it was announced that the Oregon Ducks were picked by the media to not only win the Pac-12 North, but also the conference outright. They are coming off of a season that had National Championship aspirations that did not come to fruition but look to bounce back in a big way in year too of the Mark Helfrich-era.

When you look up and down their roster for the upcoming season, one can’t help but notice the number of players that come from the state of Arizona. Helfirch, who spent a lot of time in Arizona during his days as the quarterback coach under Dirk Koetter at ASU, has made it a point of since taking over the reigns.

When asked about his recruiting in Arizona on Wednesday, he mentions it’s a major point of emphasis that won’t end any time soon.

There are many Arizona players that have been starters and that looks to remain the case in 2014. Former Hamilton Huskies, safety Reggie Daniels and offensive tackle Tyler Johnstone, are expected to start. Johnstone is coming off a major knee injury but looks to be back healthy and ready to go.

“T.J. got banged up in the bowl game but is battling back and doing great,” Helfrich mentioned. “He has really matured into a leader and I think he was not recruited as highly as he should have been. He is a fun guy and a lot of fun to have around.”

One of the top breakout performers in the nation at the collegiate level this spring on the track was freshman and former Brophy star Devon Allen. Helfrich was blown away with what he did this spring in becoming the national champion and NCAA champion in the 110 meter hurdles and is excited about his future.

“What a great spring that guy had,” Helfrich said. “He did a great job on the field (during spring practices) and then obviously blew them up on the track. I was talking to Robert Johnson, our track coach, the other day and he was was just like ‘man, I can’t believe it.’ He knew he was going to be good but not this soon in his mind.”

“We actually did some things as a team a couple days before the track and field national championship and the coaches and I discussed holding Devon out or tapering some stuff for him,” he added. “He didn’t skip a rep. He killed it, crushed it and then goes on to win a national championship.”

Daniels, Johnstone and Allen just begin the story of the Arizona standouts at Oregon. Chaparral’s Andre Yrutagoyena is a main back-up on the offensive line and will be among the first called upon if there is an injury, Thunderbird’s Kani Benoit will be a threat on special teams and will be the second or third string running back, Mountain View’s Sam Kamp looks to get reps on the defensive line, and incoming freshman Jalen Brown (Mountain Pointe) and Jalen Jelks (Desert Vista) look to begin great careers in Eugene.

One of the biggest points of emphasis Helfrich mentioned in the Ducks looking to improve on this season is their size and depth in the trenches. While Jelks may not come in and play right away, his 6-6, 270 pound frame is definitely going to be of help in that area for years to come.

As long as Arizona prospects continue to make such a big impact on a program that every year is competing to win national championships, Oregon will long be one of the main recruiting giants among the best the dessert has to offer.