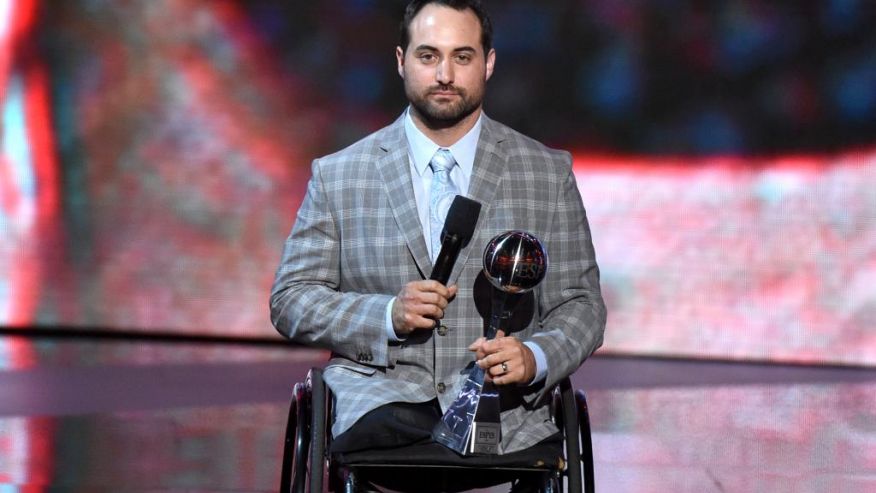 In 2005, Josh Sweeney was a graduating senior from Ironwood High School in Glendale. He had just finished his third year as a member of the Ironwood club hockey team and after graduation, joined the U.S. Marine Corps.

During his second deployment in Afghanistan in 2009, Sweeney was on the ground when he sustained injuries from a improvised explosive devise.  The result of the injury forced him to lose both of his legs.

“Initially after the injury, it was who am I know, what it my role, where can I go from here,” Sweeney told Sports360AZ.com. “It was real rough at first trying to figure out who I was after such a severe injury. But then I realized that I am the same person.”

“Hockey has really helped me realize that,” he added. “Being out there on the ice, it feels the exact same way like I was in high school just playing hockey. It has helped me get through a lot of different things, it has helped make me a better person mentally and physically. The rehab without hockey would have been really hard and I think I would have still been in a tough spot, but because of sled hockey, I think I am a much better person than I was before.”

Hockey helped Sweeney though the toughest times in his life and would eventually catapult him to successes he would have never dreamed of before and after the injury occurred. He learned about sled hockey which is one of the most popular sports for the Paralympic Games. He admitted that he had never heard of the sport before sustaining the injury.

For the 2014 Paralympic Winter Games in Sochi, Russia, Sweeney was a member of the U.S. Sled Hockey team and served as alternate captain. There was no score until late in the gold medal game with Russia when Sweeney broke free and scored the game winning goal.

“It was really awesome that I could contribute to the team in such an amazing way,” Sweeney stated. “When you are on a team with such amazing players, all you want to do it get out there and play as hard as you can and do what you can to help accomplish a win. I was fortunate enough to be the one to score the game winning goal. But it was definitely a team effort in a hard fought game against Russia.”

The road to recovery led to a gold medal for Sweeney to be hung next to his Purple Heart from his service to the United States. This was just the start of more honors he would receive in the coming months.

On Wednesday night, The ESPY’s Awarded their Inaugural Pat Tillman Award for Service which was presented in conjunction with ESPN and the Pat Tillman Foundation. The first ever recipient was Josh Sweeney for his incredible service as a Marine and then in turn on the Olympic ice in Sochi as a goal medalist. He accepted the reward in Los Angeles to a standing ovation.

“It was amazing,” he said. “I actually wasn’t too nervous before I got onto that stage until I saw Kevin Durant and Russell Westbrook and all of those big name individuals looking at me and I was like, wow.”

“I have had the chance to meet Marie Tillman before and before the show, we had the chance to talk about the award and what it means to her and why she picked me,” Sweeney explained. “It was very humbling and last night was an amazing experience that I will never forget. All the people giving the standing ovation to me, it was just unreal.”

To receive an award that fits this description was an honor in itself for Sweeney. But for it to bear the name of Pat Tillman, a person he looked up to as a kid growing up in Phoenix and watching him as a member of both Arizona State and the Arizona Cardinals before opting to serve the country, it meant that much more.

“Growing up in Phoenix, Arizona, I knew who Pat Tillman was and what he stood for and the person he was,” Sweeney explained. “I was just honored.”

Sweeney currently resides in San Antonio, Texas with his wife Amber and has been a  member of the San Antonio Rampage sled hockey club since 2010. He is also currently training up in Buffalo, New York with the U.S. Sled Hockey team. Another big part of his life is his involvement with a non-profit organization called Classroom Champions. The organization connects young kids with Paralympic mentors passing along their stories of will and grit through glass.

“Once a month we will submit videos to kids in a classroom and they will submit one back,” Sweeney explained. “Each time we respond with a lesson for that month whether it is goal setting or problem solving and hopefully by the end of the year, the kids would be doing a lot better than they we before.”

Here is the video of Josh Sweeney’s acceptance speech at the ESPY’s from Wednesday night in case you missed it: