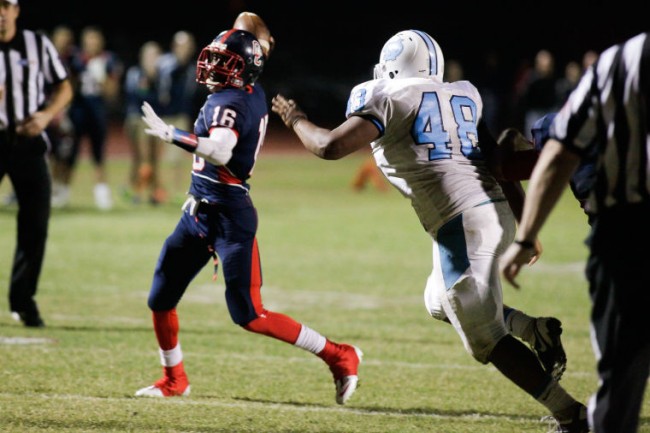 The start of fall camp 2014 for high school football is just around the corner. Here are some story lines leading up to it that catch my eye.

Commitments to this point: It has been a busy spring and summer which is normally the case for recruiting. In case you missed any of them, here is the complete list commitments thus far from Arizona’s best for the 2015 class:

Peoria Quarterbacks: There are three quarterbacks in the west valley that by the end of the 2014 season, will be considered a few of the best in the state as a result. Liberty’s Tyler Wyatt returns at QB for the Lions coming off his first full year at the position as a junior taking over for Tyler Rogers. Wyatt is an impressive two-sport athlete (also a baseball player) who is coming off a season where he threw for just under 2800 yards and 26 touchdowns. They expect another positive step forward this season. He plays a huge role for them as he is also the team’s kicker.

Now to two peoria area quarterbacks that will be making their first full season as the starter at quarterback barring injury. The first is Sunrise Mountain’s Chase Cord who started the back half of the games for the Mustangs and performed well. But he really stood out during spring ball and passing league tournaments and could be a guy poised for a breakout season.

The other is Isaac Steele at Centennial. There were three different signal callers for the Coyotes last season because of injury and Steele got his first reps under center during week 7 of last season. Steele is a great athlete whose making a name for himself in the eyes of college level coaches after working out at camps at U of A, ASU and the University of Miami this summer. He was named Co-MVP of the Miami camp where he strictly played the quarterback position. He played mostly corner back at ASU and U of A and was named the corner back MVP at the U of A camp. Steele, who is going into his junior year, is preparing to play both ways for Centennial and expects to make a big impact in 2014.

New Hamilton Coach:  Eight Year NFL Veteran Mark McMillian is the newest coach on the Hamilton football staff. He will be working with the freshman team coaching the defensive backs. His son is going to be a member of that freshman Hamilton team as well. McMillian over the last several years had trained some of the top football players in Arizona with his Camp 29. He told me that he always envisioned coaching in his future.

Chemistry over football: There are a lot of football teams getting out of town for camps before fall camp leading up to the 2014 season officially gets underway. To name a few, Apache Junction and Pinnacle are heading up to Camp Tontozona, Saguaro is heading out of state to Cal State Fullerton and Basha is out of the heat and working out up in Heber. Saguaro and Basha are taking different approaches to this time away from home than the three-a-day practices you ordinarily hear about. It has turned into more team building than just all football all the time.

Basha’s new head coach Gerald Todd is focusing on the team building aspects on the trip a little more so than practice time. Coach Jason Mohns during the trip is taking the team to the beach and also Six Flags. I personally love hearing about this from coaches. What builds chemistry isn’t just what goes on when on the gridiron, but also off of it. This approach from Todd and Mohns is building just that.