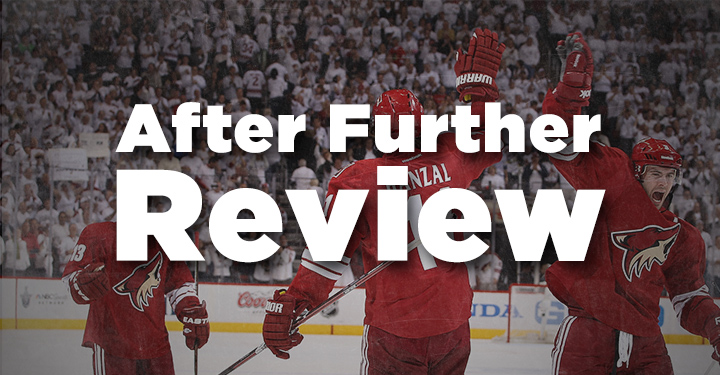 The newly-named Arizona Coyotes’ hockey season does not start for another 86 days, but we don’t have to wait that long to get hyped up about professional hockey here in the desert.  With a new name, a successful NHL draft, promising rookies, and roster moves making headlines this summer, sports fans cannot wait for the puck to drop.

Sure, the Coyotes did not end their 2013-14 season the way we had all hoped.  And to pour salt in to the wound, our rivals on the west coast, the Los Angeles Kings, have raised their second Stanley Cup in just three years.  But we know that Coyotes fans do not get discouraged that easy.  After enduring years of uncertainty regarding the team’s future here in the valley, missing the playoffs for a second straight season feels a lot less dramatic.  But make no mistake, since the Coyotes are “here to stay,” now is the time for some changes.  The Coyotes need to be “here to stay….and win it all.”

With all the changes this summer, both the team and fans can feel like winners already.

The Coyotes announced they initiated a buyout of the remaining three years of Mike Ribeiro’s contract, citing behavioral issues.  For the team and fans, this is a win by a loss.  The Coyotes needed a playmaking center, but Ribeiro just wasn’t the right fit, tallying 47 points in 80 games.  But his on-ice shortcomings weren’t as disappointing as his off-ice antics.  Reports revealing that he was late for busses, practices and missing team meetings just proved that he wasn’t a good fit for the tight-knit Coyotes.  The Nashville Predators announced Tuesday they signed Ribeiro to a one-year deal.

Two days removed from the departure of center Mike Ribeiro, the Coyotes added two key players to the roster: center, Sam Gagner and right winger B.J. Crombeen.  Gagner could be just what the Coyotes need to earn points next season.  With the subtraction of a center in Mike Ribeiro, Gagner will fill that much-needed gap.  Averaging 18:23 of time on ice and tallying 37 points in 67 games for the Edmonton Oilers last season, Gagner will provide a presence at center and an improvement in face-offs.

Speaking of presence, the acquisition of B.J. Crombeen from the Tampa Bay Lightning is another win for the team and fans alike.  When he’s on the ice, players will know it.  Crombeen has collected 112 or more penalty minutes in four of his seven seasons in the NHL.

However, is must be said that the addition of Crombeen might have some fans (ok, a lot of fans) feeling like they lost something…or someone.  Once it was announced that B.J. Crombeen would be added to the Coyotes roster, it was more evident that a fan favorite might not return.  Paul Bissonnette, aka “Biz Nasty,” was great for the sport, the fans, and the team.  But once Crombeen was acquired, the role that Bissonnette often played was now filled.  The unrestricted free agent remains unsigned and there could still be hope that Bissonnette will return to the team and the valley that loves him.

If you think that hockey is not buzzing here in the desert, think again.  During the week of the Coyotes 2014 Development Camp, you could not find a parking space at the IceDen in Scottsdale and the rink’s bleachers were completely occupied, leaving a standing room only crowd that wrapped a quarter of the way around the ice.  It was obvious that hockey fans were eager to witness the future of the franchise.

All nine of the Arizona Coyotes’ 2014 NHL Entry Draftees were in attendance for the camp.  Their number one pick: a left wing from the Ontario Hockey League, Brendan Perlini.  This prospect led the Niagara IceDogs last season with 34 goals in 58 games.  With the 43rd pick in the second round, the Coyotes chose center Ryan MacInnis, son of Hall of Fame defenseman, Al MacInnis.   The Dogs went on to draft five more forwards: Christian Dvorek, Anton Karlsson, Michael Bunting, Jared Fiegl and Edgars Kulda, and two defensemen: Dysin Mayo and David Westlund.

Coyotes’ general manager, Don Maloney, was in attendance for the Development Camp and was pleased with what he saw from the rookies.  Maloney did admit his main objective was to observe the newly-drafted players and get to know them better and he was not looking deeper than that.  Maloney was impressed with the Coyotes’ first pick, Perlini, stating that he skated like a pro.

It was not only this year’s draft picks that got to show off their abilities at the development camp.  Last year’s number one pick, Max Domi, could get an honest look at NHL ice time this upcoming season.  Maloney noted that Domi looked stronger and more confident on the ice during camp.  Fans were yearning to see Domi get called up last season.  But the Coyotes are known for allowing their rookies to develop in the minors and gain experience.  Domi has done just that and it’s not a far-fetched notion that he’ll make the team this year.

With a promising future for the franchise and the main core of the team staying in tact, it only solidifies the success that lies ahead for the Arizona Coyotes.

We’ll just have to wait 86 more days.  Only 86 more days and the puck will drop on home ice against the Winnipeg Jets.  It’ll be nice going in to the season feeling like winners.